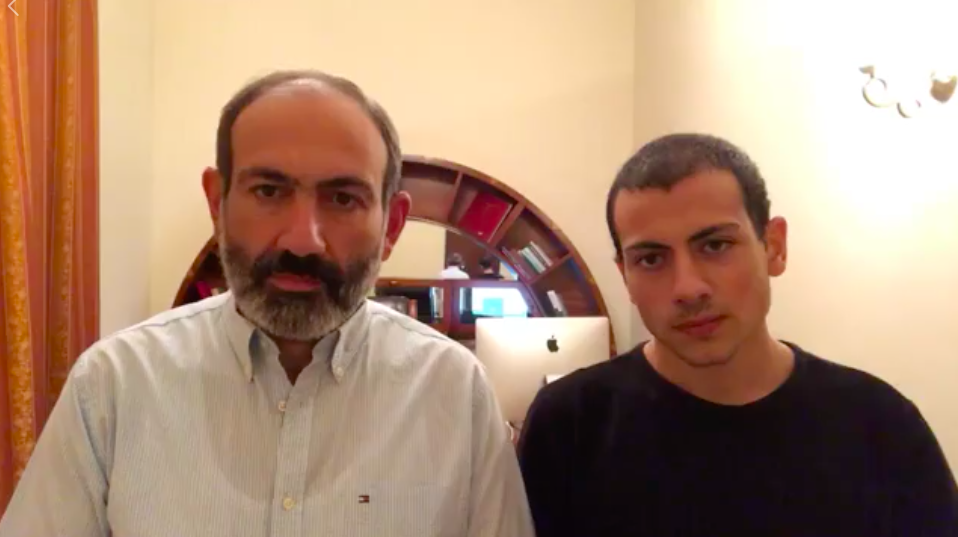 Armenian Prime Minister Nikol Pashinyan and his son Ashot, in a screenshot of a Facebook broadcast announcing Ashot's enlistment into the military.

Armenian Prime Minister Nikol Pashinyan’s son has enlisted in the military and will be deployed to Nagorno Karabakh, a relatively rare move in a region whose elites don't typically send their sons to fight.

In a live broadcast on his Facebook page, Pashinyan appeared alongside his son Ashot, who turned 18 in March. Ashot Pashinyan said that he had decided to serve in Karabakh in order to provide strength to the army and work toward a “peaceful solution” to the conflict.

Pashinyan said the gesture was not intended to elicit “praise for myself” but to encourage more Armenians to enlisted in the army. The prime minister called on compatriots abroad as well as those under the age of 27 who had deferred service to go to their nearest recruitment office and join the armed forces.

“There is no place for such [shirking] in the new Armenia,” he said.

Pashinyan’s gesture did nevertheless receive widespread praise on social media, including a post on the Azerbaijani satirical Hamam Times making an unflattering comparison with Azerbaijani President Ilham Aliyev, whose son recently graduated from university but does not serve in the military.

Citizens of both countries have complained over the years that the poor bear the heaviest costs of the conflict. The sons of government officials, by contrast, are commonly believed to be exempt from such service – though the claims are difficult to verify since neither country releases data on their recruitment process.

Armenians have long argued that bribery has allowed wealthy families to ensure their children receive safe assignments. Others allegedly let their children avoid conscription altogether by leaving the country.

Azerbaijanis also believe bribes are prevalent in the conscription system. In February 2015, the doctor at the head of military medical commission tasked with conscription was arrested for allegedly taking bribes in exchange for declaring men unfit for military service.

Hajiyev also argued that Pashinyan's son's service in Karabakh bolsters Baku's claim that the situation in Karabakh amounts to an Armenian “occupation.” Karabakh is currently controlled by a de facto Nagorno Karabakh Republic, which is not recognized by any country (including Armenia) but which is heavily propped up by Armenia.

“By this move, Armenia's leadership yet again confirms that international legal responsibility for the occupation of Azerbaijani territory rests with Armenia,” he told the news agency Azertac.

Military service in both countries is obligatory for males once they turn 18. Most Armenians serve two years; Azerbaijanis serve 18 months.