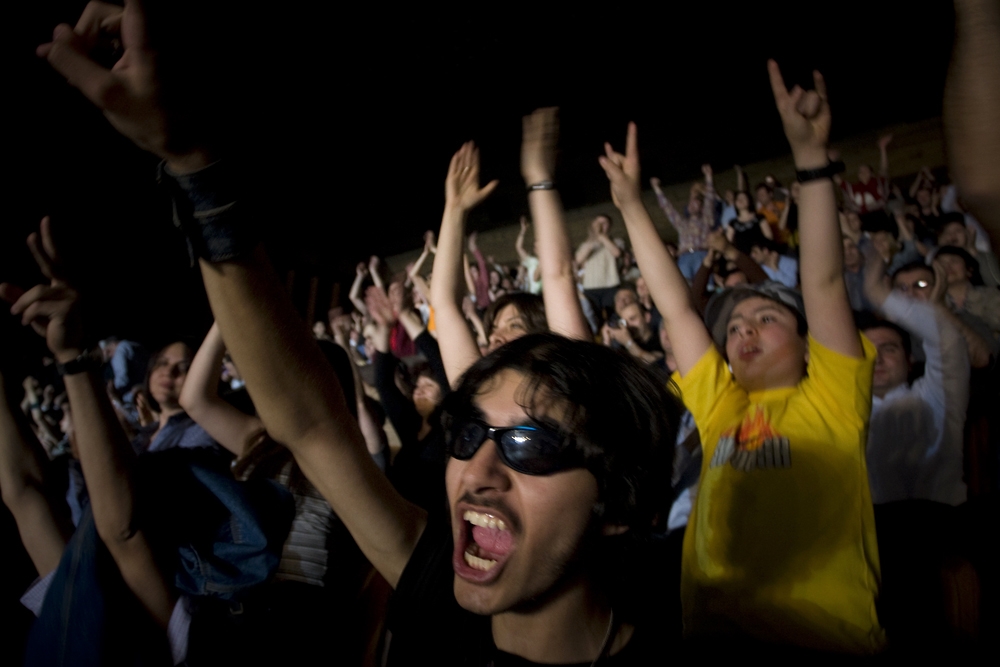 It’s not a widely known fact, but metalheads rule in Armenia. Top government officials displayed their true colors during a May 25 concert in Yerevan by the legendary British hard rock band Deep Purple.

Both Prime Minister Tigran Sarkisian and Finance Minister Tigran Davtian are huge rock fans. The two ministers, along with Culture Minister Hasmik Pogosian and Education Minister Armen Ashotian, were faces in the crowd at the sold-out Deep Purple show, which filled a 10,000 seat arena in downtown Yerevan. The concert was one of several recent shows given by big-name acts that the prime minister’s office has had a hand in organizing.

“Yes I like rock, I even used to play rock when I was young,” Prime Minister Sarkisian told EurasiaNet.org during the May 25 event.

Last October, Sarkisian described a ceremony, during which he awarded Deep Purple band members Orders of Honor, as “one of the happiest days of my life.”
“I couldn’t have ever imagined that I would have the honor of handing awards to world-famous musicians whose art I have admired all my life,” he enthused.

Deep Purple, which is regarded by some rock historians as one of the pioneers of heavy metal, had its heyday in the early 1970s, producing one of the most memorable hard-rock anthems in history, Smoke on the Water. The group enjoyed a huge underground following in the Soviet Union during the Communist era.

The May 25 concert was a benefit performance, with proceeds going toward construction of a music school in Guymri, a northern town devastated by Armenia’s 1988 earthquake. The band first visited Guymri in 1990, when it gave a charity concert in Yerevan. “It was terrifying for us to see the conditions children have to study in -- even 20 years later,” Ian Gillan, the band’s lead vocalist, said during a news conference last year. “It’s impossible to study in that damp, cold, shabby, temporary building.” Gillan called Armenia his “spiritual home,” where “the spirit of adventure is always in the air.” He had already donated $45,000 to the school from a March solo concert, during which he performed with the Armenian Philharmonic Orchestra.

Despite steep ticket prices by local standards – the equivalent of $20 to $200 per ticket – some fans described the event as a transforming experience. Thirty-nine-year-old Vahagn Papaian, founder of the popular Armenian hard rock group Oaksenham, remembered when he became the first at his school to find a copy of Deep Purple’s 1971 Fireball album, a taboo item in Soviet times. “I was as proud of it as if I were in their concert,” Papaian said.
Other Armenian hard rock musicians saw Deep Purple’s appearance as a possible catalyst for Armenia’s own hard rock scene. “This concert, and all those concerts in 2009 by Uriah Heep [and] Jethro Tull, will open a new page [in Armenian rock music], and will give Armenian hard rock a renaissance because interest in rock after each concert is increasing,” said Sargis Manukian, the vocalist for the group Empyray.

The May 25 concert, which was organized by the local recording company Vibrographus, drew fans from as far away as Iran. One Iranian at the show, Kiamaras Marafu, 35, said he remembered seeing Prime Minister Sarkisian cheering enthusiastically during the 2009 Uriah Heep concert.

“You Armenians are rather lucky that your authorities like rock,” Marafu said. “We are deprived of that opportunity, [but] it was worth spending big money to come here.”

Meanwhile, 39-year-old Gevorg Mizantashvili was among hundreds of Georgian fans in attendance. “Today my dream has come true,” said Mizantashvili, as he draped a Georgian flag on his shoulders. “Thanks, Armenia!” he chanted with fellow fans.

Gayane Abrahamyan is a reporter for ArmeniaNow.com in Yerevan.