The new law would triple penalties for insult and defamation. The government and press have had a combative relationship since the coming to power of Nikol Pashinyan, himself a former journalist. 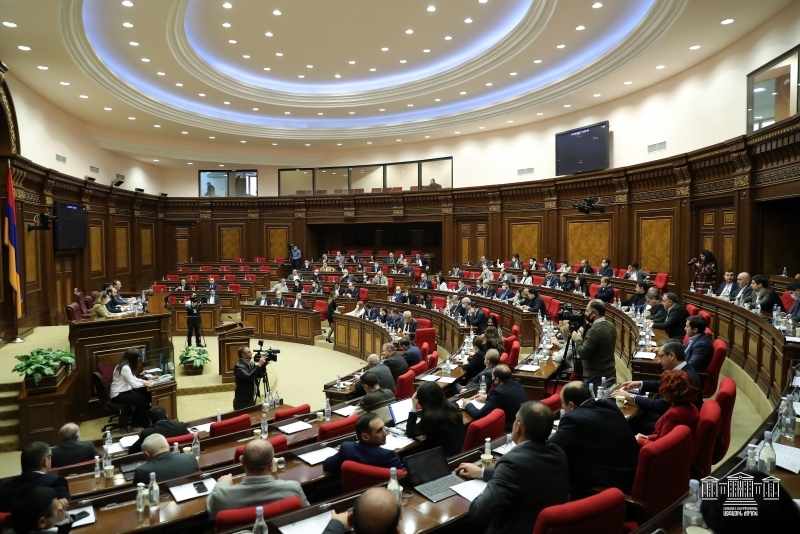 New Armenian legislation that would impose crippling penalties for insult and defamation is coming under criticism from local and international press freedom advocates, who are urging the president not to sign it into law.

The law would triple the existing penalties for “insult” and defamation to three million drams ($5,700) and six million ($11,400), respectively. Armenia’s parliament passed the legislation on March 24 on a 76-40 vote. The two opposition parties opposed the legislation.

The bill was initiated by Alen Simonyan, the deputy speaker of parliament and a close ally of Prime Minister Nikol Pashinyan. Simonyan initially sought even higher penalties, up to 10 million drams, but Pashinyan suggested the lower figures.

“When the media outlet or the citizen realizes that some financial responsibility will be imposed on them, I think they will be more careful,” Simonyan said when he introduced the bill last September.

The bill was criticized by rights organizations both at home and abroad.

“It is the responsibility of the Armenian authorities to protect media freedom and free expression in the country,” said Marc Behrendt, the director for Europe and Eurasia programs at the U.S.-based human rights organization Freedom House, in a statement. “It is unfortunate that the Armenian government is supporting fines that will stifle free expression and threaten the financial viability of media outlets in the country.”

A coalition of Armenian press freedom organizations issued a joint statement calling on President Armen Sarkissian to not sign the bill into law and for the law to be sent to the Constitutional Court.

“This amendment is extremely dangerous, especially if we take into account the tendency of government officials, politicians, and other public figures to perceive even objective criticism as insult and slander and take the matter to court,” the statement said.

The statement highlighted a 2011 decision by the Constitutional Court that ruled that judges should take into account the financial situation of the media organization in question when imposing fines for insult and slander, so that the fine doesn’t result in the organization going bankrupt.

It is a situation that Pashinyan himself has faced. In 1999, when he was the editor-in-chief of the newspaper Oragir, Serzh Sargsyan – then the interior minister, later to become president – sued the paper for slander.

“The lawsuit resulted in a six-million-dram fine and since they weren’t able to pay it, the newspaper went bankrupt,” said Shushan Doydoyan, the head of the Freedom of Information Center and one of the signatories of the joint statement. “Now they are doing the same thing that was done against them,” she told Eurasianet.

Sarkissian, the president, is scheduled to meet with the press freedom groups next week, Doydoyan said. “We are hopeful that the situation can be reversed,” she said.

Armenia decriminalized defamation and insults in 2010, following an appeal from the Council of Europe’s Parliamentary Assembly to member states. After the 2011 Constitutional Court ruling, the general practice has been for courts to not impose the maximum fine.

Since Pashinyan came to power in the 2018 “Velvet Revolution,” the government has had a combative relationship with the press, much of which is still owned by figures close to the former ruling regime.

Since then, the country has seen a significant increase in lawsuits involving journalists. In 2020, there were 74 lawsuits involving journalists; of those 61 were charges of insult or defamation, according to a report from the Committee to Protect the Freedom of Expression. “2020 was the most challenging and tense year for journalists since the Committee began monitoring,” the organization said, citing censorship regimes imposed first on the COVID-19 outbreak and then on the war with Azerbaijan.

“Public officials are among those who sue for defamation and insult, that is a very worrying tendency which could lead to good publications abstaining from criticism since the law can be interpreted broadly to just drag the media to court,” Doydoyan said.