The government adopted a tariff to protect local manufacturers, one of whom is the head of the second-largest faction in parliament. 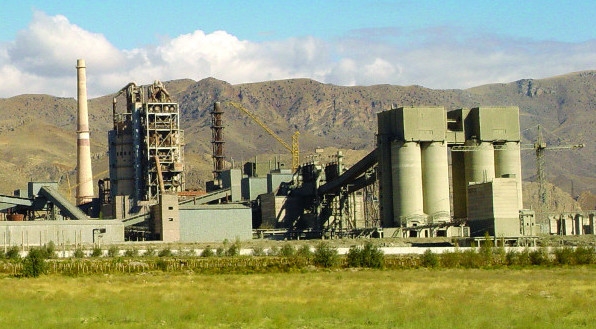 Ararat Cement, owned by Gagik Tsarukyan, who is also the head of a political party with the second-biggest representation in parliament. The government has introduced new subsidies that would benefit Ararat. (photo: Ararat Cement)

Armenia’s government has said it plans to implement a new customs duty on cement in order to keep cheaper foreign imports – especially from Iran – from flooding the market. The measure would directly benefit Gagik Tsarukyan, the head of the second biggest party in parliament and owner of one of Armenia’s two cement companies.

During a government session on February 21, Minister of Economic Development and Investment Tigran Khachatryan introduced the new, $45-per-ton duty as a means of “equalizing the pricing of imported and locally produced cement.” Khachatyran said that imports of cement had tripled over the past year because “neighboring countries” had increased subsidies to their domestic cement manufacturers, allowing them to undercut their Armenian competition.

One of those competitors is Tsarukyan’s Ararat Cement. In May, Tsarukyan visited a factory in the Ararat region to meet with employees. He complained that cheap cement from Iran was threatening the business and that it was struggling to keep all 1,200 of its workers employed. “Before we were able to export cement to Georgia and Iran and then it reversed, Iran is importing 500 tons of cheap cement every day,” he said.

Prime Minister Nikol Pashinyan – who came into office on promises to tackle corruption but subsequently reached a sort of accommodation with Tsarukyan, the country’s biggest oligarch – questioned the policy. “Are we sure that our manufacturers of cement are doing everything in their power to advance their technology or to bring prices down?” he asked Khachatyran at the government session.

Khachatryan replied that local manufacturers are acting in good faith: “I talked to one of the manufacturers – the biggest – in detail.” The manufacturer said that the price had gone down about 13 percent as the result of adopting energy-saving technology. Khachatryan did not specify which manufacturer he was referring to; Tsarukyan’s name was not mentioned at the meeting.

Pashinyan ultimately approved the duty, which will next be sent to the parliament for a vote. While duties like this would normally enter into force six months after being announced, Khachatryan said that “taking into consideration the urgency of the situation it should enter into force in 10 days.”

Tsarukyan’s Prosperous Armenia party is the second largest in parliament after winning just over eight percent of the vote in December’s elections.

“Tsarukyan got his way; the imports of cement will be limited,” read one headline on the news website panarmenian.net. “Did the government make a decision on cement for Tsarukyan?” went another headline, on news.am.

One member of parliament from Prosperous Armenia defended the new tariff against accusations of favoritism. Sergey Bagratyan noted that Ararat will not be the only beneficiary of the duty, but the country’s other cement maker, Hrazdan, will benefit as well. “When we have factories that employ thousands of people and we can’t profit under the current prices, the government has to take action to defend local manufacturers,” he told journalists on February 23.