Armenian Olympic Skier Finds Himself With No Skis

The issue quickly became embroiled in politics, with allegations of corruption and nepotism. 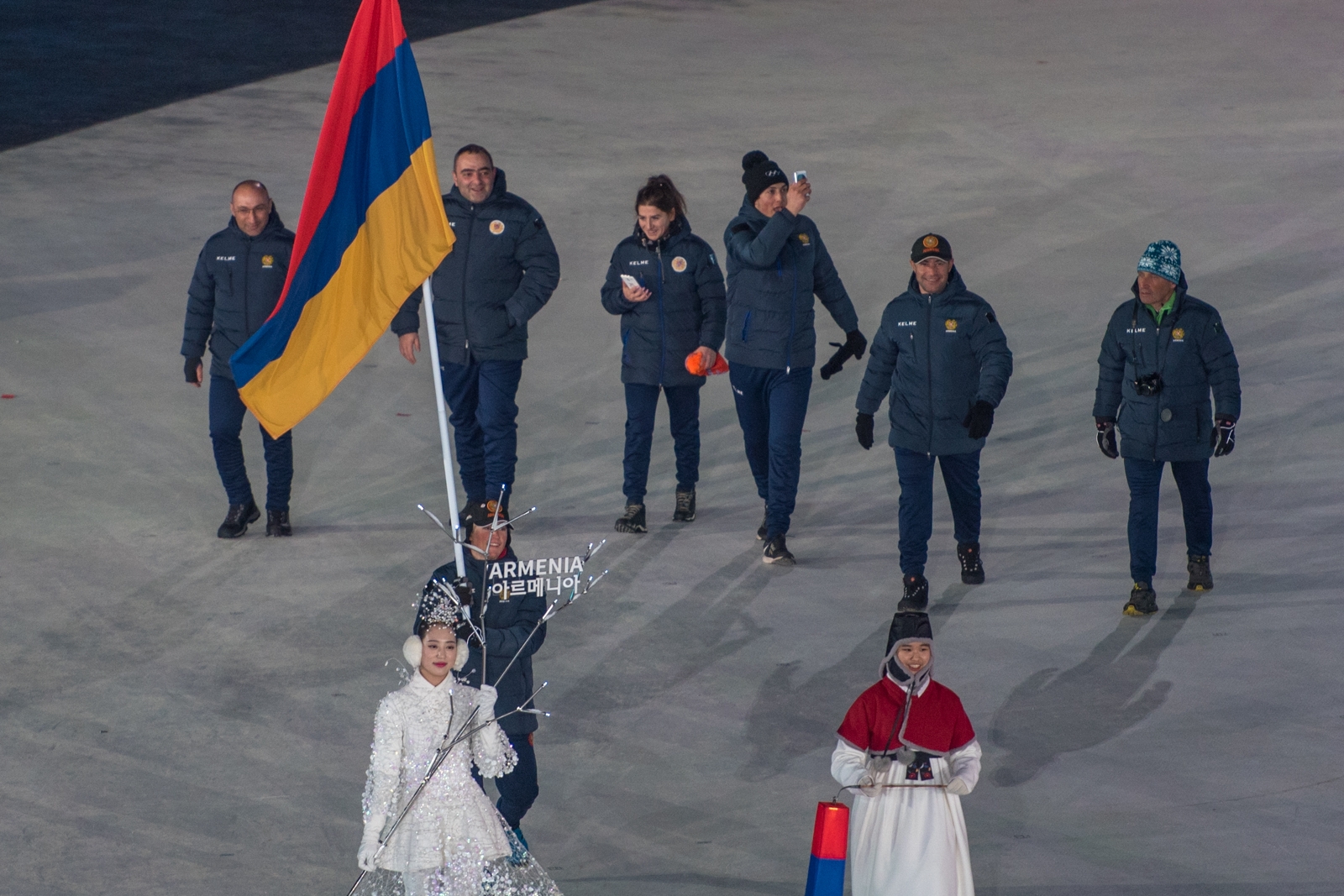 Armenia's contingent at the opening ceremony of the 2018 Olympic Games in South Korea. The country's participation hit a rocky patch as the sole downhill skier found himself without skis after breaking his only pair. (photo: Armenian National Olympic Committee)

Armenia’s only alpine skier at the Winter Olympic games in South Korea has been unable to train due to a lack of equipment – in particular, skis. The embarrassing episode elicited an outcry in Armenia against the corruption and cronyism rife in the country's sports bureaucracy.

Skier Ashot Karapetyan, one of the three Armenian athletes participating in the games, announced that he would have to drop out of the competition after breaking his only pair of skis on his first day of training.

“I often have problems with equipment,” the athlete told the website News.am. “In previous tournaments in Turkey and Iran, as well as here in Pyeongchang, I have been using my friend’s skis.”

Karapetyan’s first run had been scheduled for February 18, but he had to skip it after damaging his equipment. The athlete said that he would need time to explore the mountains and get used to the terrain before competing.

“If I cannot train and do not get skis, then, naturally, I will refuse to participate in competitions.”

The athlete says that he arrived at the games with battered skis under assurance from the Armenian Olympic Federation that he would receive a new pair once training got underway. However, the equipment failed to arrive.

According to Karapetyan, he was lacking other materials central to participation too.

“When I arrived I found out that there wasn’t even a uniform with ‘Armenia’ on it. They said my name was submitted at the very last moment, so they didn’t have time to order a uniform my size. So I brought my own.”

The issue quickly got wrapped up in politics, as the president of the Armenian Ski Federation, Arthur Harutyunyan, claimed that his nephew should have been at the Olympics instead of Karapetyan.

Harutyun Harutyunyan, son of Syran Harutyunyan, head coach of the Armenian national team, and nephew of Arthur Harutyunyan, was Karapetyan’s key rival in the competitions for team selection.

“It's clear that the leadership of the Armenian Ski Federation wasn’t so 'enthusiastic' about Ashot Karapetyan being on the Olympic team, as it intended to send an athlete who was a relative to the Federation’s president,” said Styopa Safaryan, a political analyst in Yerevan who wrote a widely shared Facebook post on the controversy. Safaryan credited the social media outrage with spurring the authorities to quicker action in getting Karapetyan his replacement skis.

According to Gagik Sargsyan, secretary general of the Armenian Ski Federation, the new skis had been ordered from an Austrian company that refused to dispatch them to Asia last minute. New skis were then ordered from Russia and have since arrived.

Karapetyan is scheduled to compete in the Men’s Slalom on February 22.