The arrest at first seem to push the protesters back on their heels, but by evening they regrouped and held a massive rally in central Yerevan. 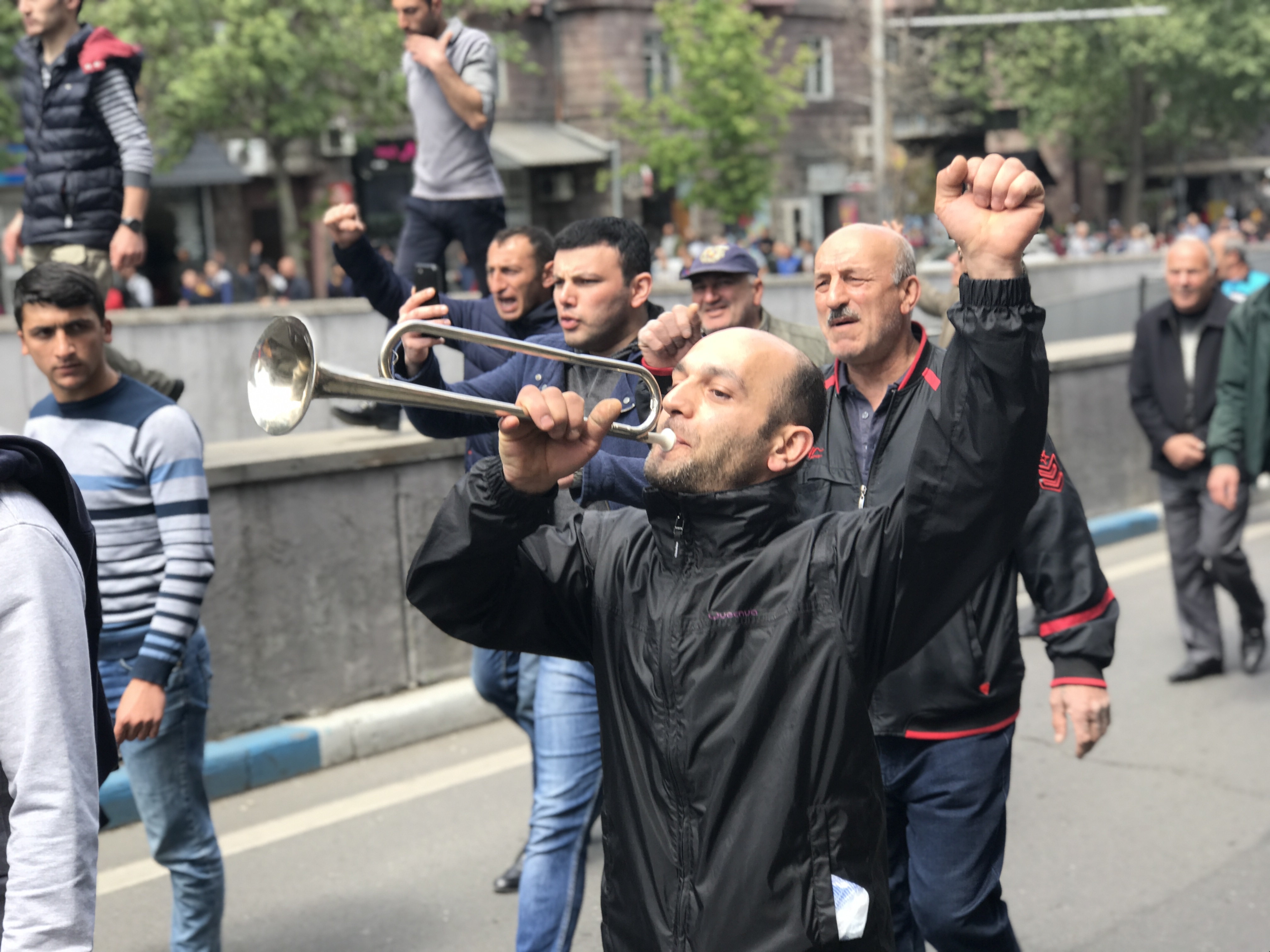 A protester plays a horn during a march in support of Nikol Pashinian, the opposition leader who was arrested on April 22. Protests against the government continued in spite of Pashinian's arrest. (photo: Joshua Kucera)

The Armenian authorities cracked down aggressively April 22 on anti-government protests that have consumed the country over the past week, arresting the protests' leader and temporarily throwing the movement he led into disarray. But the protesters regrouped by evening, holding by far their largest rally to date and showing that anger at the government showed no sign of dissipating.

In the morning, police arrested Nikol Pashinyan, the member of parliament who has emerged as the unlikely new hero of the opposition to longtime leader Serzh Sargsyan. Pashinyan has been the head of the protest movement that has energized the large majority of Armenians fed up with Sargsyan's autocratic, sclerotic rule.

The protests had been conducted in a decentralized fashion, with Pashinyan going on daily marches around the city and leading nightly rallies at the central Republic Square, while other supporters carried out creative acts of civil disobedience around the city.

Nevertheless, the arrest of Pashinyan seemed to disorient the movement. The group that was with Pashinyan when he was arrested in Yerevan's Erebuni district marched defiantly toward the center of the city. One young man burned in effigy a stuffed Cheburashka, the Soviet cartoon character to whom Sargsyan bears some resemblance.

But the marchers grew aimless after they were blocked at several points by police, turning around repeatedly to retrace their steps and at times walking in circles.

As they have in previous marches, the protesters shouted “join us!” to the bystanders who lined the roads or looked out from their apartment windows. This day, though, the cries seemed more insistent and desperate. The mood on the march was notably more somber than on previous days.

“It's time to do something,” said one sixty-something marcher, Serozh Garayan. “We need to get more people, and then we will see what we can do.”

“It's clear” that momentum was lost following Pashinyan's arrest, said another marcher, fifty-something Karine Sargsyan. “This is what they were counting on.”

By evening, though, a crowd of protesters completely filled the central Republic Square and spilled over into the surrounding streets. The mood was again festive, with groups circulating holding massive banners in the Armenian flag tricolor to chants of “Armenia, Armenia.” Young people handed out signs reading “I Am Nikol.”

It was a substantially larger crowd than the rally the night before; one local estimate put it at 115,000 people. The police had promised to break up any rally at the square but they did not follow through on the threat.

Speakers set out a new agenda: the operating slogan would no longer be “Reject Serzh” but “Victory.” “The people have already rejected Serzh,” said one speaker, Ruben Rubinyan. “Serzh thought he was a chess player, but he's a backgammon player who got a bad roll.”

Rubinyan called on protesters to carry on their civil disobedience activities without Pashinyan or other leaders. “I could be arrested tomorrow,” he said.

Pashinyan was arrested barely an hour after meeting with Sargsyan in the morning at the Marriott Hotel on Republic Square. The meeting – televised and attended by dozens of journalists – ended after only three minutes when Sargsyan walked out, complaining that Pashinyan was presenting him with an “ultimatum” to step down. “This is not talks, not a dialogue. It’s just an ultimatum, blackmail of the state, of the legitimate authorities,” Sargsyan told Pashinyan.

Sargsyan also ominously referenced March 1, 2008, when police violently broke up crowds of protesters against Sargsyan's election, killing ten. “You have not learned the lesson from March 1,” Sargsyan said.

Police also arrested two other members of parliament who have been active in the protests, Sasun Mikaelian and Ararat Mirzoyan, along with other organizers.

“The only way for them to deal with these protests was to isolate the leaders and hope that the protests will grow chaotic and that people would get demoralized,” Mikayel Zolyan, a political analyst with the Yerevan think tank Regional Studies Center, told Eurasianet. “You can isolate them but people are still going to go out on the street. Maybe their actions will be less coordinated and effective. We still have to see how that plays out.”

The protests began April 13, in opposition to Sargsyan continuing his rule by moving from the presidency into the prime minister's seat. He did so as the country adopted a new constitution changing to a parliamentary form of government in which the prime minister, rather than the president, is the most powerful figure.