Many Armenians fear that the government is preparing to cede control over Nagorno-Karabakh and are demanding that their prime minister renounce such a concession. 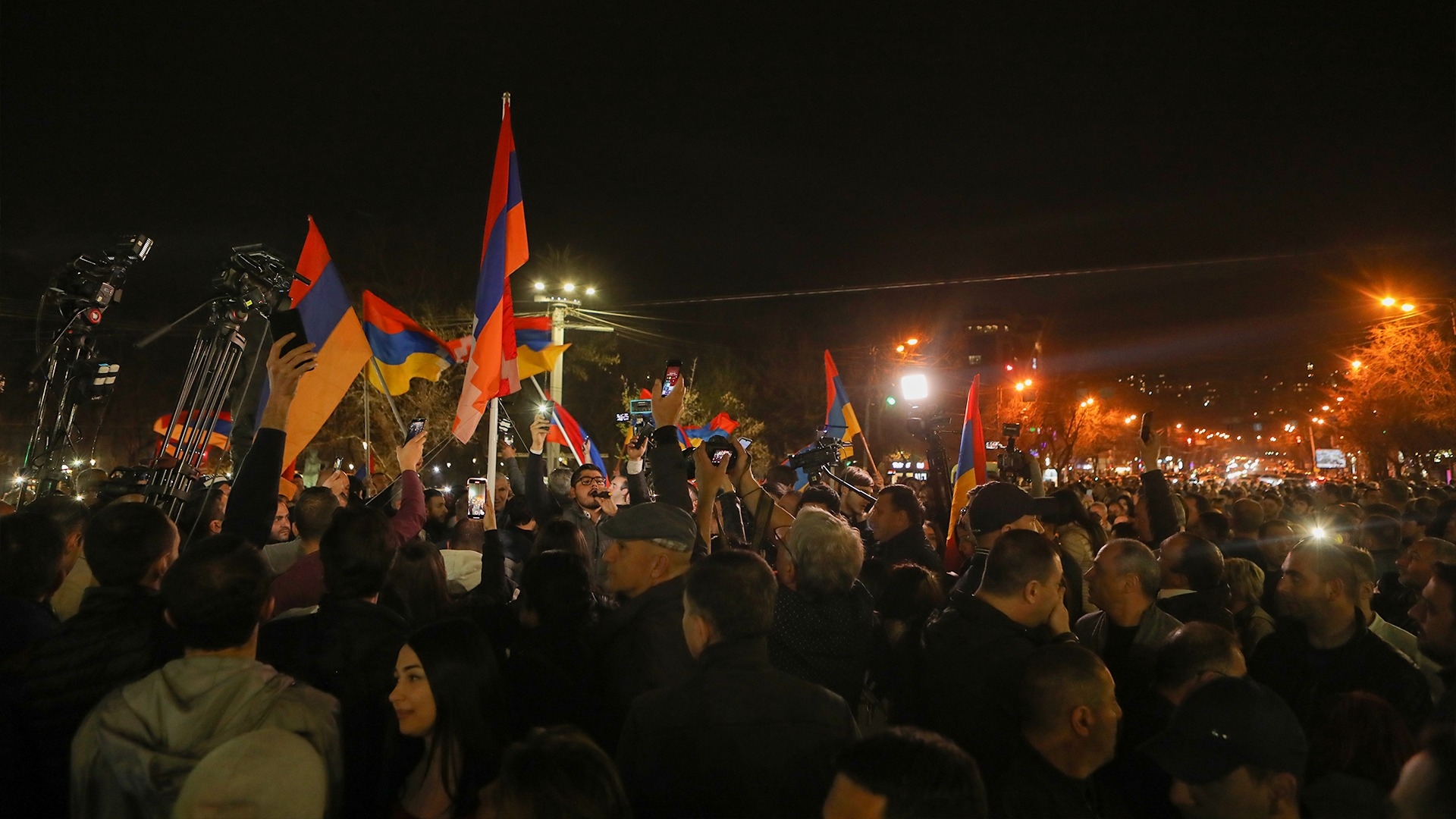 Armenians rally April 5 to demand no territorial concessions ahead of a meeting between their prime minister and the president of Azerbaijan. (photo: Armenia Alliance, Facebook)

Armenia's political opposition has rallied to demand no territorial concessions to Azerbaijan ahead of the two leaders’ meeting in Brussels.

Thousands, in the largest demonstration since elections in July 2021, rallied in central Yerevan on April 5 under a banner reading “Artsakh will not be part of Azerbaijan.” Artsakh is an alternate Armenian name for Karabakh, the territory at the heart of the decades-long conflict between the two sides. "For the sake of Artsakh, let's save Armenia," participants chanted.

Armenian Prime Minister Nikol Pashinyan was to meet Azerbaijan President Ilham Aliyev the following day in Brussels, the first face-to-face between the two leaders since December.

As the government’s public rhetoric has shifted in recent months, many Armenians have begun to fear that the leadership is preparing to cede control over Karabakh.

The rally was organized by the two opposition blocs in parliament, “Armenia” and “I Have Honor,” who accused Pashinyan of putting Armenia’s own security at risk with his conciliatory moves toward Azerbaijan.

"None of us here want war, but we can't surrender to the butcher," Aram Vartevanyan, a senior member of the Armenia Alliance, told the crowd. "We can't lose again because we have nothing to lose anymore," said Hayk Mamijanian of “I Have Honor.”

The rally also saw a rare public appearance by Serzh Sargsyan, the former president of Armenia whom Pashinyan overthrew in the 2018 “Velvet Revolution” and who is now a supporter of “I Have Honor.”

Sargsyan told reporters that he doubted a formal agreement would be reached in Brussels but that Pashinyan and Aliyev may come to a verbal agreement that would be “unacceptable” for Armenians. "The Armenian people will never agree to have Artsakh under Azerbaijani rule under any circumstances,” he said. “Otherwise, Armenia will always be begging for peace."

Public support for ceding control over Karabakh is virtually zero. In the most recent poll by the International Republican Institute, in December, respondents were asked what would be an acceptable solution to the conflict with Azerbaijan. Thirty-five percent favored independence for the territory, 50 percent making it part of Armenia, and 11 percent making it part of Russia. One percent favored the status quo, and less than one percent said “other.”

Speakers at the rally demanded that Armenia must remain Nagorno-Karabakh’s security guarantor and that the country could not sign a treaty with Azerbaijan that would violate the rights of the Armenian population of Karabakh to self-determination.

"Any government that deviates from our core demands will be sent to hell," said Ishkhan Saghatelyan, a member of the Armenia Alliance and a senior official in the Armenian Revolutionary Federation – Dashnaktsutyun.

In Karabakh itself, the territory’s de facto parliament also issued a statement on the eve of the Brussels meeting calling for “Armenian unity.”

“We are certain that the republics of Armenia and Artsakh with the full support of the Armenian diaspora, merged into a single fist, together will be able to withstand regional challenges and stand up for its national interests,” the parliament said in an April 5 statement published on its website.

Aliyev and Pashinyan are meeting to work out the implementation of the ceasefire agreement that ended their 2020 war, and to work on a comprehensive political resolution of the conflict.

The terms under which that political agreement are being discussed have evolved in recent weeks. Baku has offered a five-point proposal to Yerevan, according to which the two sides would recognize each other’s territorial integrity, promise not make claims to each other’s territory in the future, not threaten each other’s security, demarcate the border, and unblock transportation links.

Pashinyan and other officials have said that proposal is acceptable, but also that the rights of Armenians living in Karabakh must be guaranteed.

That has fed suspicion that Pashinyan is prepared to recognize Azerbaijan’s territorial integrity – that is, including Karabakh, which is now protected by a 2,000-strong Russian peacekeeping force.

"We are not hearing statements like ‘Artsakh can't be a part of Azerbaijan under any form,’ instead we hear that Armenia and Azerbaijan are recognizing each other's territorial integrity and shouldn't have any claims over each other's territory," Benyamin Poghosyan, head of the Yerevan think tank Center for Political and Economic Strategic Studies, said in an April 3 program on RFE/RL. “I can conclude that the only claim the Armenian government has on Azerbaijan is to give up that 3,000-square-kilometers area that is now under Russian control, give that territory some status under Azerbaijan, and promise not to kill the people in Artsakh."