They say that the parliament is standing aside while the executive branch unilaterally makes consequential decisions about the future of Nagorno-Karabakh. 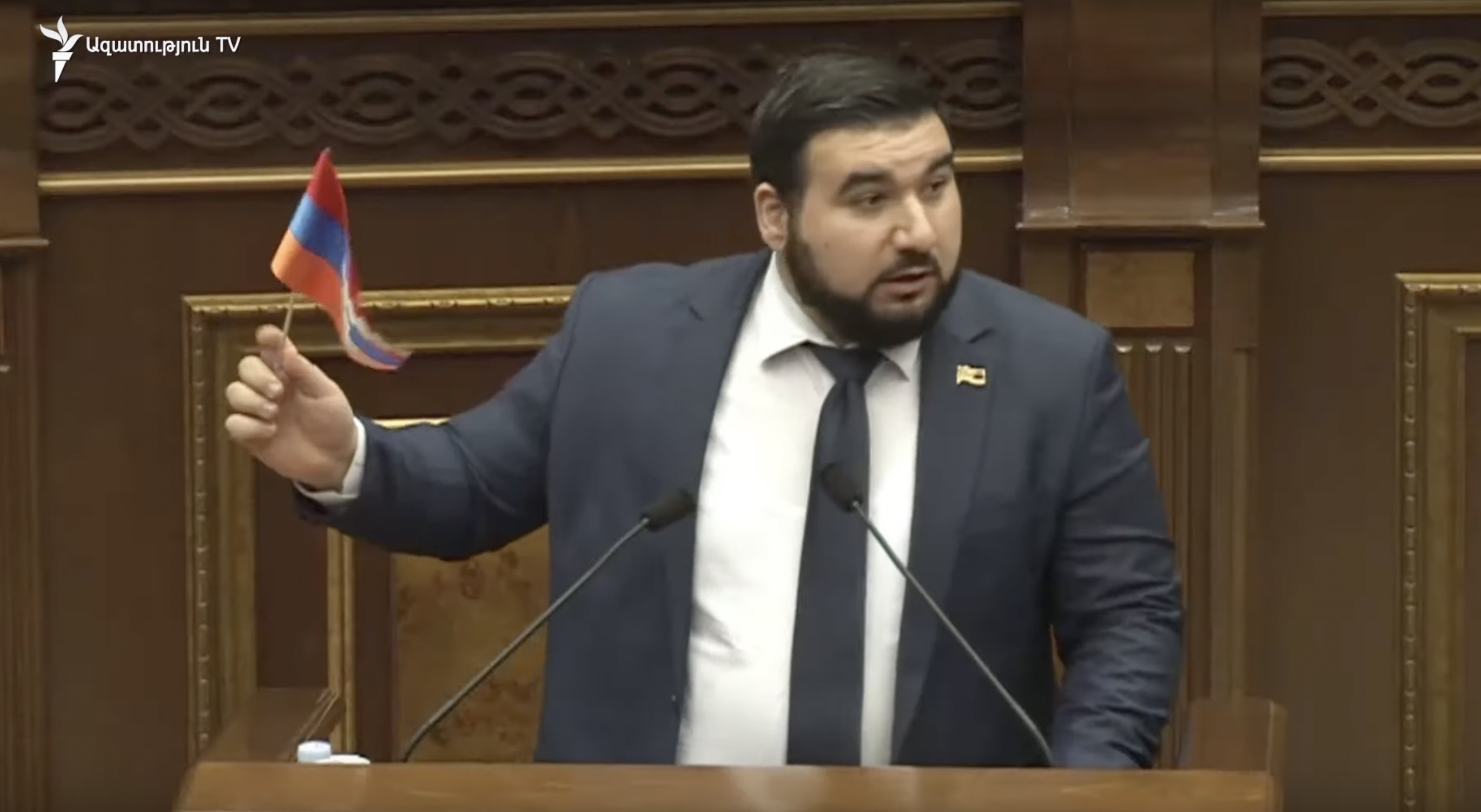 Vagharshak Hakobyan, a member of Armenia's ruling party, takes down a flag of Nagorno-Karabakh from the rostrum of Armenia's parliament after an opposition leader had placed it there. (photo: screengrab, RFE/RL)

As diplomacy between Armenia and Azerbaijan has gained pace, resistance in Armenia has grown to what many fear will be unacceptable concessions on their side.

The two opposition blocs of the Armenian parliament announced on April 12 that they would be boycotting the body’s sessions for the week and walked out en masse. They would instead be traveling to towns on Armenia’s border and to Nagorno-Karabakh, the territory at the heart of the conflict with Azerbaijan, they said.

But when a group of MPs tried to enter Karabakh, they were stopped by Russian peacekeeping troops and not allowed to enter.

It all came a day after the foreign ministers of Armenia and Azerbaijan had a rare one-on-one phone call, discussing the delimitation and demarcation of their mutual border and peace negotiations to bring an end to their decades-long conflict. The call was a follow-up to a meeting four days earlier in Brussels of the leaders of the two countries, where the two sides unprecedentedly agreed to "instruct Ministers of Foreign Affairs to work on the preparation of a future peace treaty, which would address all necessary issues."

Recent signals from Yerevan have pointed to significant concessions: Senior officials have said they are willing to recognize Azerbaijan’s territorial integrity, which many interpret as the government’s willingness to cede control over Nagorno-Karabakh.

That would amount to a “red line” that Armenia should not cross, said Seyran Ohanyan, a former defense minister and now leader of the largest opposition faction in parliament, the Armenia Alliance.

"The provisions stipulated in the Constitution of Armenia, our territorial integrity, sovereignty, are not subject to negotiation,” Ohanyan said in parliament on April 12 before the walkout. “Any option of resolving the Nagorno Karabakh conflict that would make Artsakh part of Azerbaijan is unacceptable," he said, using an alternate Armenian name for Karabakh.

The resistance has forced Prime Minister Nikol Pashinyan on the defensive. On April 13, he explained that the government’s position was that the rights of Armenians in Karabakh should be the focus, not the administrative status of the territory. “If before we made the status of Karabakh the foundation, and guarantees of security and rights proceeded from that, now we are making the guarantees of security and rights the foundation and the status proceeds from that,” he told parliament. “In other words we are saying that status is not the goal, but a means of providing security and rights to the Armenians of Nagorno-Karabakh.”

The opposition has accused the parliamentary majority, Pashinyan’s Civil Contract party, of standing aside while the executive branch takes sole control of the negotiation process.

"Instead of discussing our real agendas and finding solutions to critical issues, they [the ruling party] take a passive position, especially regarding the Artsakh issue,” Ohanyan said. “The parliament has become an appendage of the executive branch, making what should be the country’s main platform for politics apolitical.”

Ohanyan then hung the flag of the self-proclaimed Nagorno-Karabakh Republic on the rostrum of parliament, and opposition members displayed it in front of their seats.

Following Ohanyan’s gesture, a member from the ruling party, Vagharshak Hakobyan, then removed the flag from the rostrum. "A narrative being voiced here suggests that they are traveling to Artsakh to take on the most important agenda and to protect the citizens of Artsakh. I want to argue the contrary,” he said. “By traveling to Artsakh now, they are endangering Artsakh and Armenian citizens. Take this into consideration.”

Amid calls from the opposition for the authorities to take a harder-line stance on Karabakh, the government has instead been proceeding cautiously.

Speaker of Parliament Alen Simonyan responded to criticism that members of the government don’t want to visit Karabakh by arguing that it would only act as a pretext for Azerbaijan to act more aggressively.

"For example, what would Aliyev do to me in my case?” he asked in an interview with RFE/RL. “I'm not going so that it does not become a cause of provocation [by the Azerbaijani side]. In this fragile situation, an action like that could be provocative. I think it [visiting Karabakh] is wrong. The negotiations are ongoing, and I shouldn't serve as a cause for the other side to fire one more bullet."

Still, when the opposition MPs were prevented from entering Karabakh, the Ministry of Foreign Affairs issued a statement criticizing the Russians. “This action contradicts the Trilateral [ceasefire] Statement of November 9 [2020], which envisages the unimpeded connection of Nagorno-Karabakh with Armenia through the Lachin corridor,” the ministry said in an April 12 statement.

While Pashinyan has long faced resistance from the parliamentary opposition, led by figures from the government he ousted in 2018’s “Velvet Revolution,” he is now facing pressure from all sides.

The current negotiations appear to be leading to a situation in which the existing ethnic Armenian population of Karabakh will be forced to leave, said Levon Zurabyan, the vice-chairman of the Armenian National Congress party led by the first president of Armenia, Levon Ter-Petrosyan. “The primary goal of Azerbaijan is getting something that will result in depopulating Artsakh,” he told RFE/RL in an April 12 interview.

The contretemps over the flag in parliament demonstrated “helplessness from both sides … this is kindergarten,” Zurabyan said. “On one hand we have the most incompetent government that doesn’t see any other way out but capitulation. […] On the other, we have an opposition that doesn’t offer a real alternative but offers policies that are radical such as recapturing Hadrut and Shushi [territories lost by Armenians in the 2020 war with Azerbaijan] which is equally dangerous and counterproductive.”