The military clashes this week have become the latest cause for partisan squabbling. 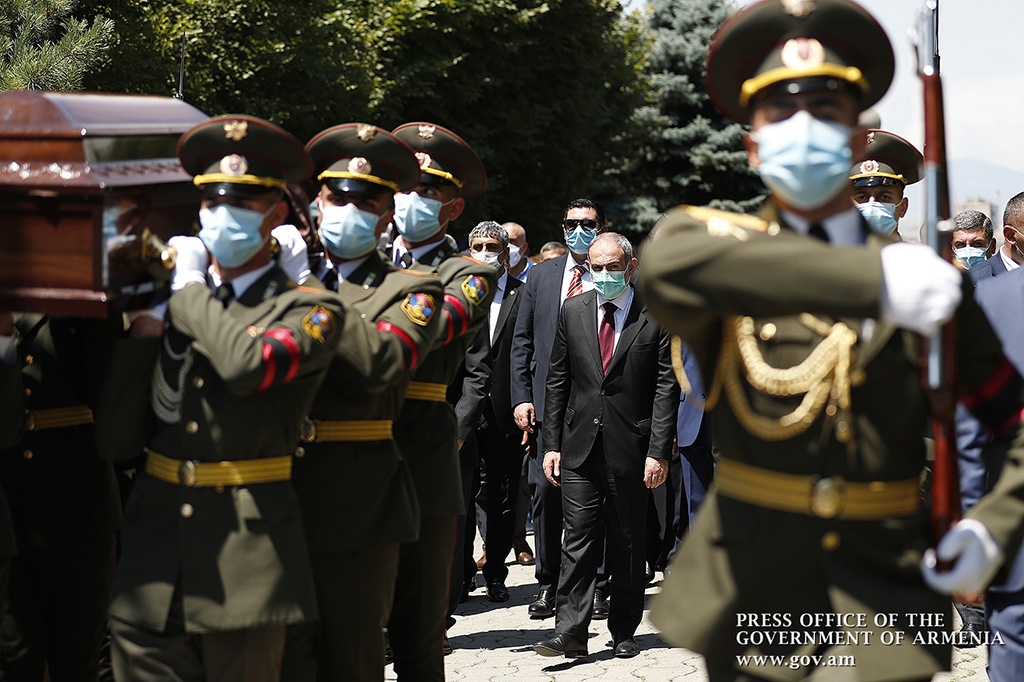 Pashinyan at a military funeral this week (primeminister.am)

Amid the worst fighting with Azerbaijan in four years, the Armenian government's perennial critics have rallied around the army. But they have not spared Prime Minister Nikol Pashinyan their censure.

The fighting, which began on July 12, has been concentrated in the Armenian province of Tavush and across the border in Azerbaijan’s Tovuz province. Residents have been forced to take shelter as fire from Azerbaijan, including from armed drones, has targeted several villages. At least 17 have died on both sides.

For Pashinyan’s domestic opponents the fighting is a chance to reprise familiar critiques, usually on Facebook.

The Republican Party, which held power for two decades before Pashinyan took control in a 2018 “velvet revolution,” has tried to separate its support for the military from its criticism of the government. Deputy RPA head Armen Ashotyan wrote that the authorities are missing a chance to respond to Azerbaijan’s propaganda.

“You will not believe this, but the government’s fakes [users on Facebook], low class propagandists, even in this situation, are focused not on the information war with Azerbaijan, but on their domestic agendas,” he wrote.

Some accused Pashinyan of shaming the army during an existential military crisis.

Arpine Hovhannisyan, a former RPA justice minister, on July 14 claimed the government is spending too much energy “discrediting” the soldiers who have shored up Armenia’s positions over the years. She recalled how, in August 2019, Major-General Grigori Khachaturov expanded Armenia’s position in Tavush by some 140 hectares. Khachaturov’s father, Yuri Khachaturov, was one of the first senior officials to fall when Pashinyan came to power, over his alleged role violently suppressing protests in 2008. He is currently out on bail awaiting trial.

The government is “getting positive press at the expense of a general’s son, whose father has been discredited at the hands of the same people,” Hovhannisyan wrote.

Pashinyan himself has said little to these critiques. But during a July 15 briefing in parliament, his ally Andranik Kocharyan, the head of the foreign relations committee, said RPA critics have failed to see that the army is stronger than it was under their leadership. “Unlike the weakness of defense and security systems during their tenure, today we have advantages and we should be excited and happy with these advantages, because they belong to everyone,” the Armtimes.com quoted Kocharyan as saying.

Another opposition party, Bright Armenia, called for unity, despite its rivalry with Pashinyan. Saying nothing about Pashinyan or his government, party head Edmon Marukyan wrote on July 17, “We must all do our job well and be united so that the rear is strong.”

Yet the head of the largest opposition group in parliament, Gagik Tsarukyan of Prosperous Armenia, used a July 14 call with a Russian counterpart to discuss Armenian domestic developments, its struggle fighting coronavirus, and its economic problems, his office said. In the context of Moscow’s lukewarm support for Pashinyan – most recently as the Moscow-led security bloc to which Armenia belongs ignored pleas for assistance – such a call could look provocative. Tsarukyan’s beef with Pashinyan is personal: Last month officers from the National Security Service searched his home amid investigations into tax evasion, bribing voters in the 2017 parliamentary elections and illegally seizing state land.

Several others repeated charges, widely aired since he came to power, that Pashinyan lacks tolerance for criticism. The prime minister and his allies don’t understand the need for unity, acting like “whoever talks back to them should be put on the ground,” wrote Bagrat Yesayan of the Dashnaktsutyun Armenian Revolutionary Party in a sarcastic post.

Far right groups have tried to blame Pashinyan and his liberal supporters for the latest violence. Veto leader Narek Malyan is behind a years-long harassment campaign against the local office of the Open Society Foundations (OSF), financed by George Soros. (Eurasianet also receives funding from OSF.) Malyan posted photos of local OSF grantees and accused them, without evidence, of treason.

In a television interview, Adkevad leader Artur Danielyan even alleged that Pashinyan had made secret deals with Azerbaijani President Ilham Aliyev that allowed Baku to strengthen its positions.

At the end of the week, the government said Tavush province was calm.