Following a week of attacks from his opponents, now Pashinyan is being abandoned by some of his allies. 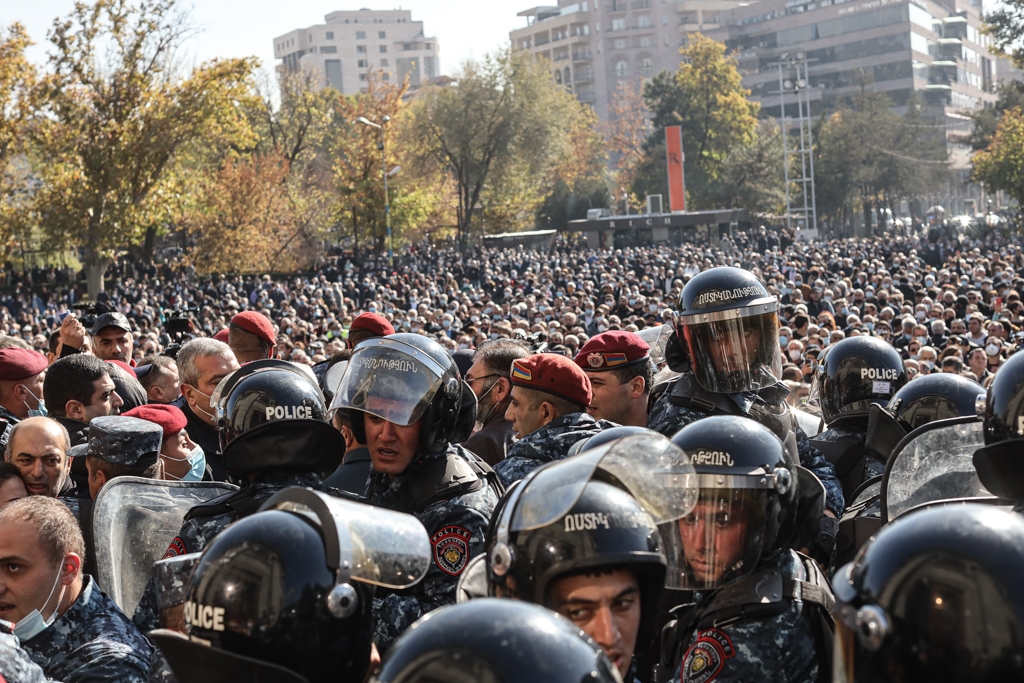 Protesters clashed with police after the truce was announced on November 10. (photo: Jonathan Alpeyrie)

Embattled Armenian Prime Minister Nikol Pashinyan is coming under further pressure after controversial comments on social media that even allies interpreted as a threat to spark a civil war. The country continues to reel following its defeat to Azerbaijan.

“I watched dozens of videos of soldiers from the front line today,” Pashinyan posted on Facebook a bit past midnight on November 16. “I am amazed by the boys' insights. Guys, you are right. I am waiting for you in Yerevan. To finally solve the problems of those who are barking under the walls.”

In spite of the oblique language, the response was immediate and explosive. Many accused Pashinyan of trying to incite violence against his opponents, and even in more generous interpretations that he was engaging in an unproductive search for enemies when the country is in crisis. “Don’t you have anything better to do than to watch dozens of videos?” one user asked under his post.

The post appeared to be the last straw for many of Pashinyan’s allies. Within an hour, a member of parliament from his ruling My Step coalition, Gayane Abrahamyan, had announced her resignation. “I have been expending all my efforts to make the situation better and prevent the worst,” she wrote in her own Facebook post. “But effective immediately I consider my job as a deputy to be over. I apologize for many mistakes.”

Abrahamyan was followed by several others. Varak Sisserian, the chief of staff for Deputy Prime Minister Tigran Avinyan, announced that he was leaving Pashinyan’s party, Civil Contract. Deputy Minister for the Environment Irina Ghaplanyan stepped down. Another member of parliament, Taguhi Tovmasyan, left Civil Contract but remained in parliament.

Pashinyan has been under heavy fire from his political opponents in the week since he signed a capitulation with Azerbaijan following a disastrous defeat in the six-week war between the two sides. Members of his ruling team came under physical attack immediately following the surrender and in the days that followed, opposition parties organized rallies calling him a “traitor” and demanding he resign.

It wasn’t Pashinyan’s first call for vengeance following the capitulation. In a Facebook video shortly after the deal was signed, he said: “I call on all citizens who understand what is happening to take revenge” on members of the former regime, which he ousted in the 2018 “Velvet Revolution,” calling out some by name.

Over the weekend, the National Security Service (a law enforcement body under Pashinyan’s direct command) arrested several opposition leaders on charges of planning a coup. Among those arrested were Artur Vanetsyan, the leader of the Hayrenik party and a former head of NSS appointed by Pashinyan; Vahram Baghdasaryan of the former ruling Republican Party; and Ashot Minasyan, the commander of a volunteer military unit.

“The attackers, who opposed the domestic and foreign policy of the state, intended to seize power by assassinating the head of government,” the NSS said in a November 14 statement.

But the rash of resignations from his allies was a new escalation in the crisis.

Another My Step MP, Lusine Badalyan, said in an open letter to Speaker of Parliament Ararat Mirzoyan that she had resigned “on that disastrous night” when Pashinyan signed the capitulation deal and Mirzoyan was dragged out of his car and badly beaten. “But when you were attacked, I took it back because it would be unfair to abandon you in that condition,” she wrote. “If My Step does not take immediate action at this time, I will resign.”

Pashinyan tried to walk back his comments in the morning. He posted again on Facebook, saying that “violence or incitement to violence can by no means be a tool of government […] now I expect the opposition as well to state clearly that it also renounces violence.”

At a press conference Pashinyan said he was not considering resigning. He later attended a session of parliament, which was boycotted by opposition MPs who said that they would only attend to discuss the prime minister’s resignation.

But other resignations continued: In the afternoon, Foreign Minister Zohrab Mnatsakanyan issued a handwritten resignation note, which his spokesperson posted on Facebook.