Armenian ruling party members have been involved in two physical altercations in recent days. They say they are just responding to verbal provocations. 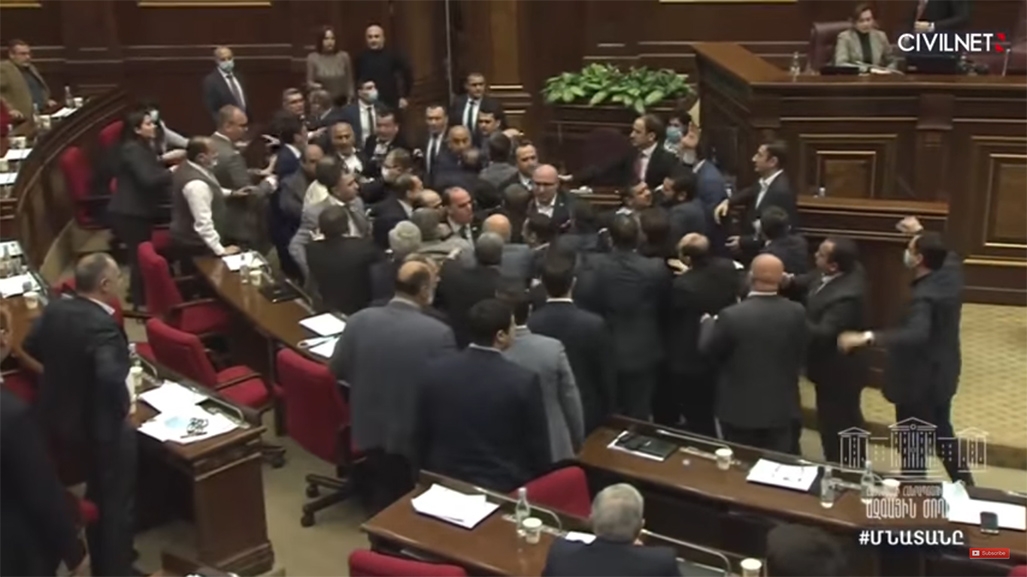 Screenshot of Armenian MPs engaging in fisticuffs on May 8.

Armenian Prime Minister Nikol Pashinyan has long been proud of describing the 2018 “Velvet Revolution” he led as “non-violent.” But two altercations within the space of a few days, both instigated by his allies in parliament, suggest that the new regime isn’t averse to mixing it up.

On May 8 – as it happens, the two-year anniversary of Pashinyan being elected prime minister – the Armenian parliament was the scene of a brawl. The proceedings began with what has become a standard event of the legislature: bickering between the ruling party and the opposition.

Edmon Marukyan, the leader of the Bright Armenia Party faction in parliament, was speaking at the rostrum about a controversy regarding rich Armenians who had sought coronavirus bailout money. (Pashinyan had earlier complained that 70 people who applied to receive the stimulus money “have a billion drams [$2 million] in their accounts,” raising questions about how exactly the government had that information.)

Marukyan was criticizing another member of parliament, Babken Tunyan of Pashinyan’s My Step coalition, who had said that those complaining about Pashinyan’s apparent bank snooping were “stupid” and “scum.” As Marukyan spoke, another My Step MP, Sasun Mikaelyan, began shouting at Marukyan, including saying that he intended to “crush” him.

Mikaelyan then started striding toward Marukyan, who left the rostrum to confront him. Mikaelyan took a swing, Marukyan hit back, and the seats emptied, with some MPs trying to separate the two combatants and others trying to join in.

The fight, naturally, became the talk of Armenia and when Pashinyan weighed in on it he stood up for his ally.

“Why did [Marukyan] walk off the rostrum and swiftly move towards Sasun Mikaelyan? For engaging in a political dialogue?” Pashinyan asked. “The incident was a provocation, that’s the only conclusion I can draw especially after watching the video more than three times.”

Pashinyan went on to complain that he and his allies have been under constant attack for two years, and that Marukyan – a former ally of Pashinyan under the corrupt old regime – was now serving the former authorities.

"We have grounds to suspect that you [Marukyan] and your activities are an integral part of a plan to use psychological, moral and ultimately physical violence against My Step,” he said. The prime minister went on to brand Marukyan’s party as “parliamentary servants” of former Presidents Serzh Sargsyan and Robert Kocharyan.

Curiously, although Pashinyan referred to watching the fight on video, Manukyan claimed that Pashinyan had been in the chamber when it happened and “could have stopped it but he didn’t.” At least one video, albeit from a TV channel linked to another opposition party, Prosperous Armenia, appeared to show Pashinyan in the hall when the fight took place.

That fight followed one a few days earlier, also involving a My Step MP. Alen Simonyan, a deputy speaker of parliament, ran into one of the leaders of Armenia’s small far-right movement, Artur Danielyan, on the street in Yerevan on April 29. In Simonyan’s account, Danielyan used a vulgar expression against him and Simonyan responded by head-butting him.

“Yes, giving into a provocation is unacceptable, and I think that we will draw conclusions from this and will not give into similar provocations in the future,” Simonyan said following the parliamentary brawl. He then tied the event to his own fight. “Out of nowhere, he [Danielyan] used vulgarities of a sexual nature. You want to say that this has no connection to what happened today?”

Pashinyan said that the ruling party has been left with no choice but to respond physically to the pressure against them.

“They want to force us to choose: either we turn into people who beat people outside their houses, or the members of our team have to be afraid to leave their homes,” he said. “We will not allow this. We will put you down on the ground.”