Prime Minister Nikol Pashinyan called another rally in which he accused the army chief of staff of working on the orders of the former regime. 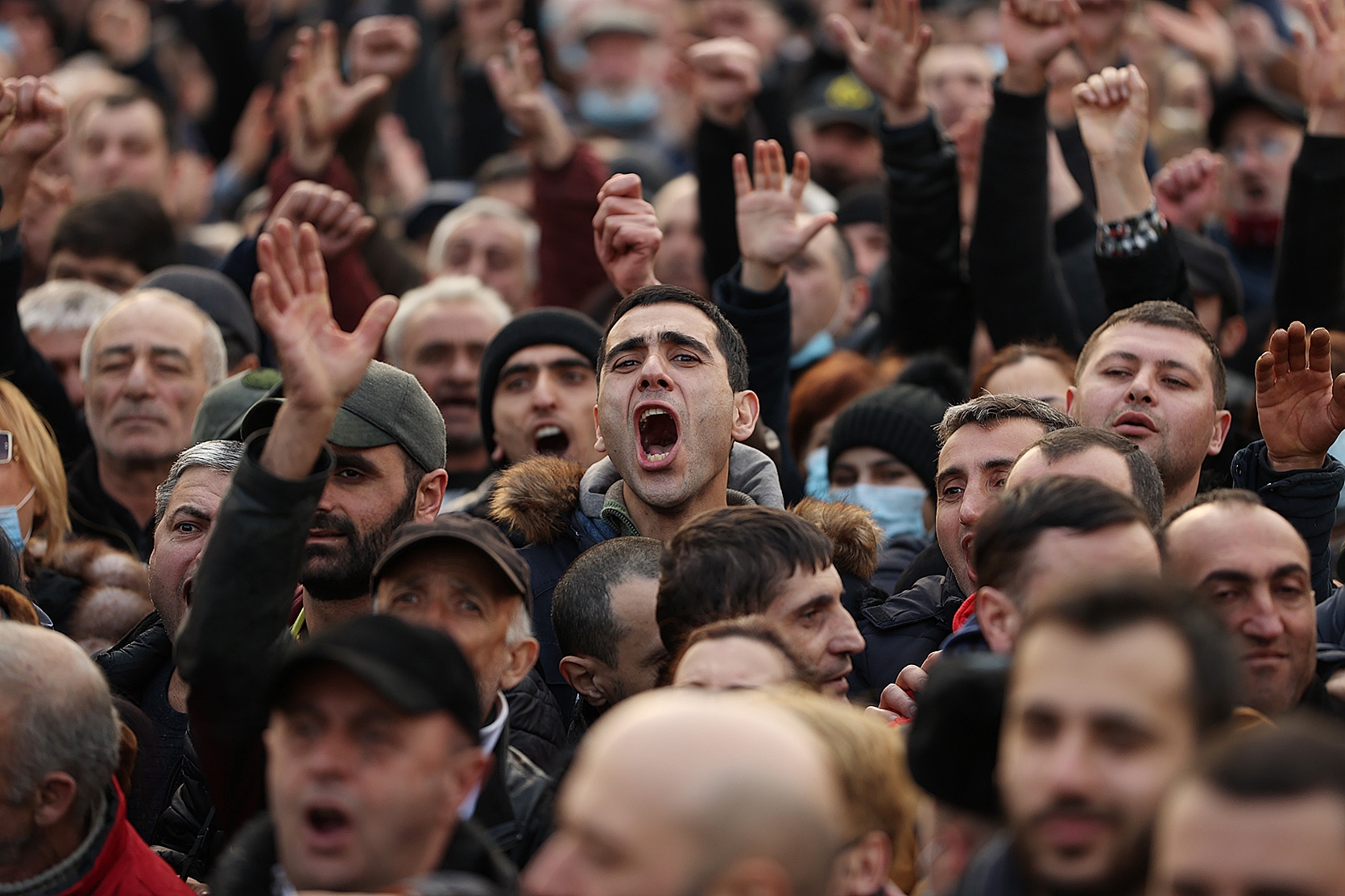 Armenia’s figurehead president has refused to sign off on an order to fire the chief of staff of the armed forces, becoming yet another element to the metastasizing political crisis gripping the country. Armenian Prime Minister Nikol Pashinyan responded by calling another rally, at which he accused the military of carrying out the orders of the former regime in order to “crush democracy under tanks.”

Following an unprecedented challenge by Armenia’s military leadership, Pashinyan on February 25 tried to fire the chief of staff. But such a move requires the signature of President Armen Sarkissian, who had three days to approve Pashinyan’s order. Pashinyan called the military officers’ demand that he step down a “coup attempt,” and at a hastily organized rally later in that day he said that if Sarkissian refused to fire the chief the president would effectively be “joining the coup.”

Two days later, Sarkissian announced that he wasn’t going to sign. In a statement, he tried to take a middle ground. “It is indisputable that the Armed Forces must remain neutral in political matters,” he said. “It is also evident that due to war, the Armed Forces personnel need all our support and attention today more than ever.” He added that “frequent changes in the personnel cannot regulate the current situation in the country.”

Sarkissian has largely been a figurehead, and this is the first such decree he has refused to sign in his time in cohabiting with Pashinyan. Sarkissian originally was appointed by the former ruling regime, which Pashinyan ousted in the 2018 “Velvet Revolution.” But he found a modus operandi with the new regime and developed an independent persona as an international statesman representing Armenia.

Since the loss in last year’s war with Azerbaijan, though, he has been distancing himself from Pashinyan while not joining the opposition alliance, led by former regime figures, that has been demanding Pashinyan’s resignation. “We emphasize that the president of the republic does not support any political force and makes decisions guided exclusively by state and national interests,” his office said in his February 27 statement.

Pashinyan wasn’t convinced. In a February 28 Facebook live broadcast, he said Sarkissian’s explanation “doesn’t make any sense” and called on his supporters to again gather for a rally the following day. “I will show that this decision is groundless and has no legal basis. This is an important conversation so that we can record and understand this,” he said.

March 1 also is the anniversary of one of independent Armenia’s darkest days, when in 2008 security forces violently cracked down on protests against fraudulent elections. Ten people were killed.

Pashinyan, who rose to political prominence in part because of his role in those protests, sought to combine the events of 13 years ago with those of the current day. "There will be no new March 1sts in Armenia," he said in his Facebook broadcast.

At the rally, he claimed that the army chief of staff, Onik Gasparyan, was “making a political statement by the demand of Serzh Sargsyan and the Republican Party,” referring to the former president and ruling party. “They want to crush democracy under tanks. Armenia can’t have that kind of head of the armed forces,” he told the crowd, which chanted “Onik – traitor!”

He also repeated his call to Sarkissian to sign the order firing Gasparyan, reading aloud a statement made earlier in the day by the country’s National Security Council. “According to the law, the proposal to appoint or dismiss the chief of the armed forces … is under the discretion of the prime minister,” the statement said. “The Security Council asks the president to sign the decision by the prime minister.”

“I hope that Armen Sarkissian will make decision that benefits the republic,” concluded Pashinyan after he finished reading the statement.

Pashinyan did offer a concession of sorts, saying that he would be open to early elections if the opposition agreed to them. That marks yet another reversal on that question: he had said he was open to snap elections in December, before walking that back in February.