His comments came in an interview two weeks before the country transitions to a parliamentary system. 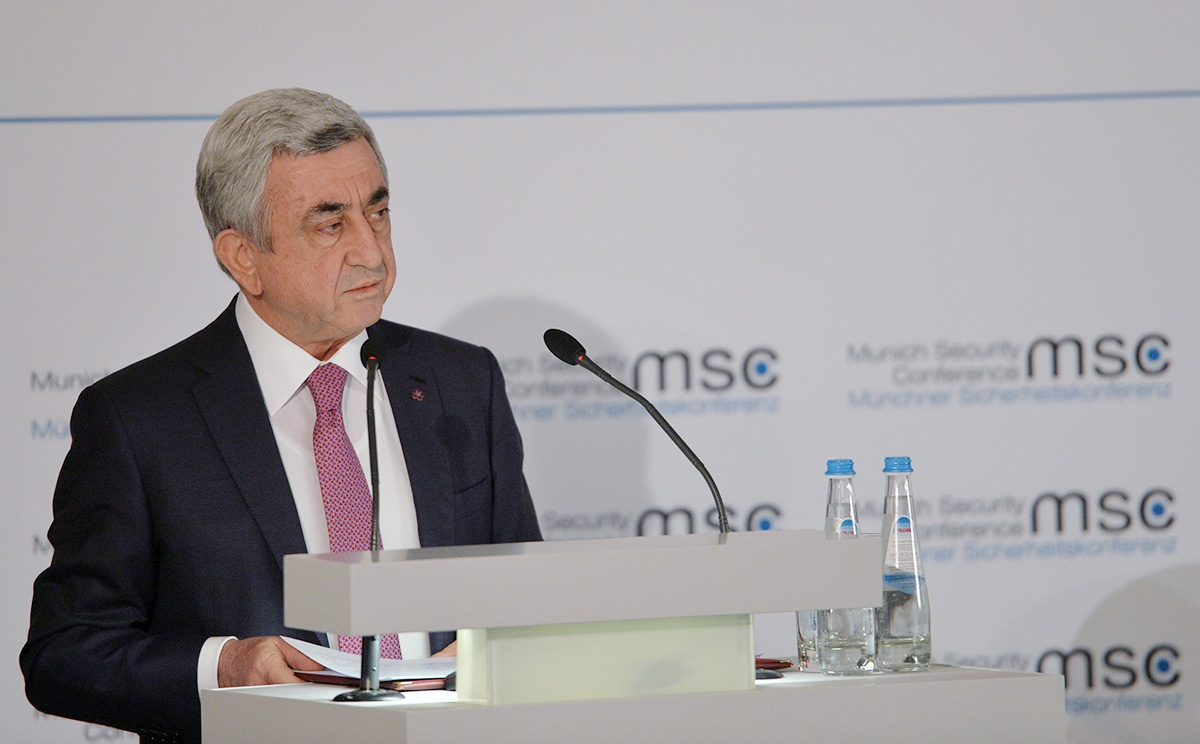 Armenian President Serzh Sargsyan speaks at the Munich Security Conference in February 2018. In a new interview, he hinted that he would be nominated as prime minister in the new parliamentary system of government. (photo: president.am)

Armenian President Serzh Sargsyan hinted that he aims to extend his decade-long rule in a March 19 interview. The comments came two weeks before his presidential term is set to expire and the country transitions to a new political system under which the prime minister – possibly Sargsyan – will be the most powerful figure.

Speaking with the Tert.am news service, Sargsyan walked back his 2014 pledge to not stay in power after Armenia makes its long discussed transition from a presidential to a parliamentary republic. Whether or not Sargsyan would slide over to occupy the prime minister post has been the subject of much speculation in Armenia.

The 2014 pledge was pretty hard to misinterpret. If Armenia were to choose a parliamentary form of government – which it later did – “then I will also not aspire to the post of prime minister,” he said. “I believe that one person must not aspire to the reins of power in Armenia for more than twice in a lifetime.”

Sargsyan justified his apparent change of opinion by citing fighting in Nagorno-Karabakh and recent internal unrest, which he said have combined to fundamentally alter the political climate in the years since he made his pledge not to remain in power.

Sargsyan also accused opponents of taking his 2014 statement “out of context.”

“I still do not aspire to the post of prime minister,” he said. “But I have never regarded myself as someone who is guided by prejudice or rigid thinking. I cannot fail to reckon with the reality and think that I bear no responsibility for the future and our country’s smooth course.”

The transition is set to take place on April 9, the date Sargsyan’s term expires. His allies have already begun mobilizing their support for his candidacy as prime minister.

Sargsyan went on to speak of ongoing “discussions” within his ruling Republican Party of Armenia and its junior coalition partner, the Armenian Revolutionary Federation - Dashnaksutyun, on who should be the country’s next prime minister.

“I don’t know when we will finish those discussions,” he said. But he said that if he were in fact nominated, he would prioritize handing over the reins to younger figures. “I will be spending more time transferring our country’s entire visible and not visible experience of the past years to young political leaders,” he said. “This is an issue which is extremely important right now.”

Some say this statement may signal the president’s intention to groom successors and influence Armenian politics for years to come.

Chatham House analyst Anahit Shirinyan wrote on Twitter that if “Sargsyan wants to stay in power, wasting the benefit of the doubt he had (if at all) over the Constitutional shift to a parliamentary system. Question is how much opposition/public resistance this will generate, given the starkly divided Armenian opposition.”

Others were quick to notice the parallels with Vladimir Putin, who was elected to a fourth presidential term in Russia under controversial circumstances on March 18. The Russian president famously switched roles with Prime Minister Dmitri Medvedev in 2008 and continued to influence the country’s politics behind the scenes.

Director of Yerevan’s Regional Studies Center Richard Giragosian wrote: “[It’s] pretty sad to note just how much Armenia tends to mimic Russia in this case, Armenians and Russians both have leaders who don’t leave office.”