An outtake of Pashinyan’s speech has caused heads to roll and the prime minister to lash out at the media – again. 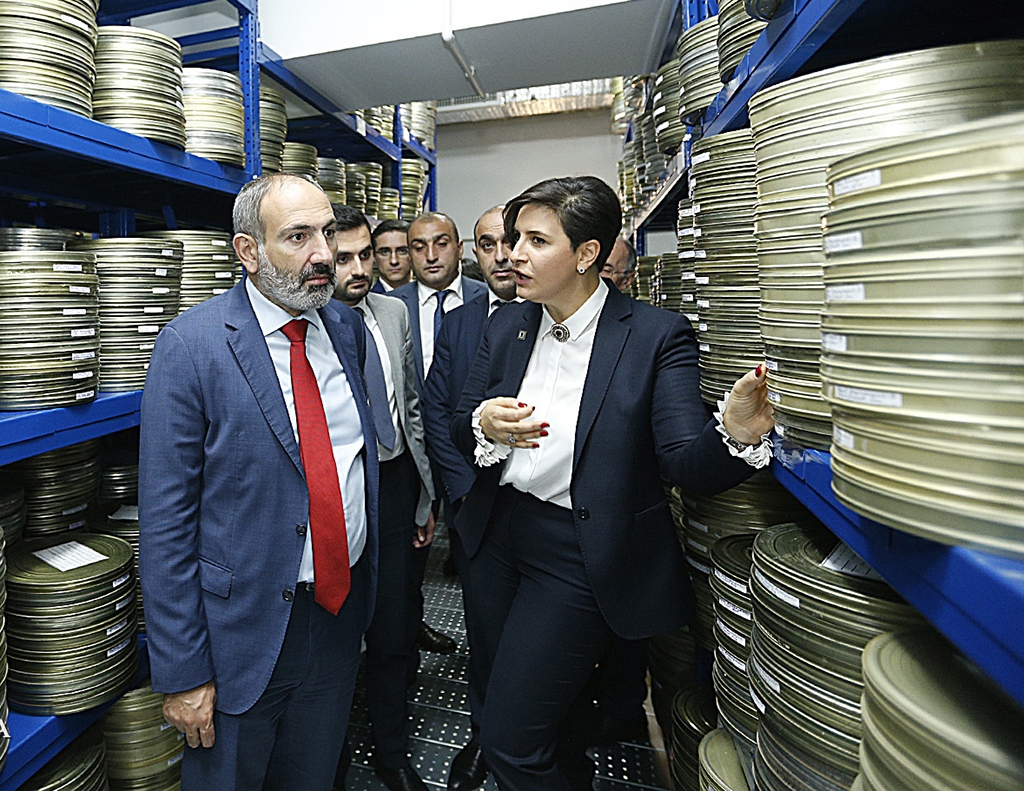 Pashinyan with Public TV director Margarita Grigoryan during a visit to the state broadcaster in September. (primeminister.am)

Allies of Armenian Prime Minister Nikol Pashinyan are outraged that footage of him drinking water and coughing have leaked online. Amid calls for answers, the top leadership at Armenian public television has resigned.

In most democracies, this would be a tempest in a teapot. Pashinyan looks nothing less than human in the offending video, as he prepares to record an address on the continuing COVID-19 lockdown. But the prime minister, a former journalist, has cultivated an especially confrontational relationship with his erstwhile colleagues since coming to power in early 2018.

The scandal began on April 18 when outtakes from the routine speech appeared online, edited to include sultry lounge music and pictures of the now-familiar spiky-headed coronavirus emerging from the premier’s mouth. The head of Pashinyan’s My Step ruling faction in parliament, Lilit Makunts, demanded the responsible party come forward. If not, she threatened, My Step would invite the Television and Radio Commission, the independent state body that regulates media, before parliament for questions.

“The fact that the premier didn’t know he was on air poses security risks,” Makunts told news website 1in.am on April 20.

Rather than dismiss the video as a trivial practical joke, the opposition has demanded “consequences.”

In an April 19 apology, the Public TV Company of Armenia said the live feed was mistakenly broadcast to stations around the country for 20 minutes ahead of the speech, prompting some social media users to blame opposition-controlled media for the leak.

The next day, Public TV Company Executive Director Margarita Grigoryan resigned. Vardan Hakobyan, the creative director who was in charge of the live feed, also resigned. More senior management at the network departed on April 21.

The episode has offered Pashinyan-friendly media another punching bag.

The Armenian Times, a newspaper edited by Pashinyan’s wife Anna Hakobyan, reported that the video was part of a grand conspiracy. Citing its own “well-informed sources,” The Armenian Times claimed that the original footage was leaked to a television station controlled by the Armenian Revolutionary Federation Dashnaktsutyun, a political party outside parliament. The article said that the head of that station then gave the footage to the 5th Channel, a popular station that supports former President Robert Kocharyan, who has been jailed under Pashinyan.

For his part, Pashinyan has used the episode to attack the media yet again. On April 19, during a Facebook live broadcast, the prime minister tarred unfriendly journalists with a broad brush: Before the “Velvet Revolution” he led in 2018, “99 percent of the media and 70 percent of journalists received money from the [former] authorities. Now they don’t get it [the funding]. The whole media field is furious that it is not receiving money now,” he said.

Pashinyan has often shown himself thin-skinned to criticism, repeatedly accusing critical journalists of supporting the former authorities. Many in the media say this us-versus-them approach has created a climate of intimidation.

Though it is true that much of Armenia’s media is owned or controlled by figures loyal to the old regime, the Pashinyan government’s steps to reign in “fake news” and muzzle reporting have been roundly criticized by international press freedom groups.