Armenian soldiers on trial in Azerbaijan

Some of the soldiers have been used as bargaining chips, and more deals appear to be in the works. 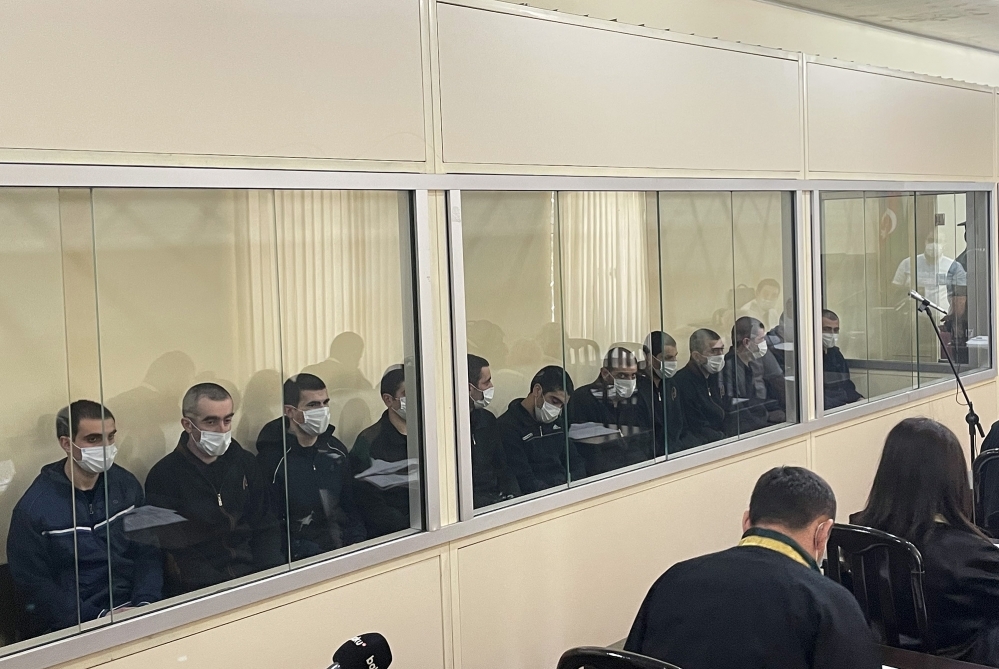 Some of the Armenian detainees in a photo distributed by Azerbaijani state media.

Prosecutors say the bulk of the soldiers entered Azerbaijani territory following the end of hostilities, violating the November 10 ceasefire agreement that insisted Armenian soldiers be withdrawn from Nagorno-Karabakh and the surrounding regions. Baku has called them “terrorists” and “saboteurs” who must face legal accountability.

Armenia, though, considers the soldiers “prisoners of war,” and has demanded that Azerbaijan return them as stipulated in the ceasefire statement, in which the two sides agreed to return all “prisoners of war, hostages and other detained persons.” It has not explained how or why the soldiers crossed the border from Armenia following the ceasefire.

Those soldiers are being tried jointly, 53 of them in four separate groups, on charges including terrorism, weapons possession, illegal formation of an armed group, and violating the border. They face up to life in prison.

The concurrent trials have been covered widely by the Azerbaijani press, and the accused have said they are not guilty. Some have testified that their commanders did not tell them where they were being deployed.

“They deceived us,” one soldier, Gegam Serobyan, testified. “Otherwise I would not have entered another country’s territory with a weapon.”

The trials come as Baku has been seeking to use the Armenian soldiers as bargaining chips to gain concessions from Yerevan, above all maps of land mines. On June 12, as the first trials were just about to start, 15 prisoners were released and sent back to Armenia, while Armenia agreed to hand over maps of mines in the Aghdam region.

Following that deal, former member of parliament Nazim Baydamirli joked that perhaps justice was not Baku’s primary concern in the trials. “Weren’t these detainees terrorists?” he asked on Facebook.

Analyst Elkhan Shahinoglu, head of the Baku think tank Atlas Research Center, also suggested that the trials were connected to ongoing negotiations for the maps. “The trial of one of the groups of Armenians is about to start,” he told RFE/RL. “They will be convicted and then extradited under certain conditions, and we will continue to see exchanges of Armenians who did not cause any Azerbaijani casualties for mine maps.”

Back in Yerevan, family and other supporters of the soldiers held in Azerbaijan have been organizing an ongoing sit-in outside the government building.

They complain that both the Armenian government and the international community have been unable to get the Armenians returned. “The trials are absurd, our boys are alone there,” one relative told RFE/RL.

International organizations have consistently been calling on both sides to release all the detainees they still hold. A May 28 statement by the American, French, and Russian co-chairs of the OSCE’s Minsk Group called for “the release of all prisoners of war and other detainees on an all-for-all basis.” Armenia is believed to have already released all the Azerbaijani soldiers it had detained.

Yerevan has been relatively silent on the trials, though officials have been consistently demanding that all Armenians being held by Baku be released unconditionally. Armenians say that Azerbaijan is holding more than 100 prisoners of war; Baku has acknowledged holding only 60 and has been silent on the fate of the remaining soldiers and civilians that Armenia has identified as having been in Azerbaijani custody at some point.

“They are trying to make the captives into a subject for bargaining, which is unacceptable,” said Tatevik Hayrapetyan, an Armenian member of parliament, at a June 30 session. “There is a clear statement, there is an obligation” to return the prisoners, she said.

Armenia’s human rights ombudsman has complained that the proceedings are show trials that “violate human dignity.”

“The extensive press coverage of trials encourages hatred. In Azerbaijan there are calls to torture and kill the captives,” the ombudsman, Arman Tatoyan, wrote on Facebook.

In parallel to these proceedings, there have been two more court cases involving the war.

Two foreigners of Armenian descent, one Lebanese and the other Russian, have faced charges that they fought on Armenia’s side. The highly publicized trials come as Azerbaijan itself has come under international condemnation for using Syrian mercenaries during the war.

On June 14, Lebanese citizen Vicken Euljekjian was sentenced to 20 years in prison on charges including terrorism and mercenary activity. Euljekjian’s partner, Maral Najaryan – who was herself detained until being released and extradited to Lebanon in March – testified that he was paid more than $2,000 a month to fight for the Armenian side. But in his trial Euljekjian accused her of lying and said that he was press-ganged by Armenian armed forces but never fired a weapon.

The Russian, Eduard Dubakov, has been charged with similar crimes. He was indicted on June 30, and his trial is set to start July 7.

Armenia has already tried two Syrian mercenaries for their participation in the war. In contrast to the Azerbaijani proceedings, their trial, which lasted only one day, was held behind closed doors; they were given life sentences.

International watchdog groups have not been monitoring the trials, and Azerbaijani human rights organizations also have steered clear.

In May, Armenian anti-war activists including Georgi Vanyan and Yuri Manvelyan appealed to Baku to release the soldiers, and a group of prominent Azerbaijani activists asked their government to comply. Investigations into the soldiers’ activities “has not revealed any grave criminal activity,” the appeal said. “We have no doubt that this will make a serious contribution to the peace process. The mothers of these soldiers are waiting for them at home and will be grateful for your decision.”