The deal has raised questions of conflict of interest in a government that has made a priority of prosecuting corruption among members of the former regime. 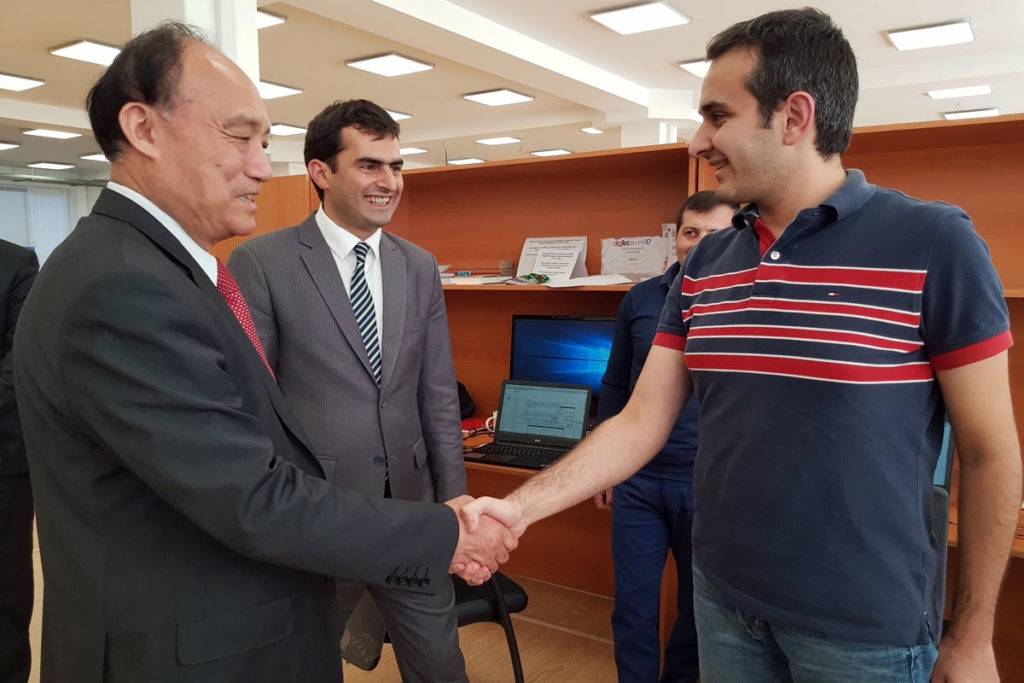 Minister of Transport, Communication and IT Hakob Arshakyan (center) at a meeting between Secretary General of the International Telecommunication Union (ITU) Houlin Zhao and officials at Grovf, a company that Arshakyan co-founded. Arshakyan's work as minister is benefiting his former business partners, including at Grofv, raising accusations of a conflict of interest. (photo: Grofv)

On November 1, Armenian Prime Minister Nikol Pashinyan announced the approval of a project called Engineering City, an IT campus to be built on public land on the outskirts of Yerevan. The $21 million project is projected to create 2,000 new jobs and train a further 1,500 young IT professionals.

Half the money is to come from a loan to the government from the World Bank, the other half from National Instruments, an Austin, Texas-based IT company whose local subsidiary is one of Armenia’s largest tech employers.

But the official overseeing the project, Minister of Transport, Communication and Information Technologies Hakob Arshakyan, until recently worked for National Instruments. He also co-founded two companies that are involved in the project, as well, meaning that he effectively oversees $10.5 million in public investment that is directly beneficial to private businesses closely tied to him. The mixing of public and private business has raised concerns about conflicts of interest in a government that came to power on a platform of eradicating the widespread corruption of the former authorities.

Arshakyan worked for seven years at National Instruments, leaving the company in December 2017 as regional partner program manager. He then co-founded the systems-integration startup Araxis Engineering, which lists its address at Engineering City. Araxis’s connection to Engineering City was first reported by the news website panorama.am.

The connection elicited some consternation on Armenian social media. “This is clearly a conflict of interest. In a normal country, Minister Hakob [Arshakyan] would have officially recused himself from any involvement in this program,” said one posting cited by Panorama. “The minister shouldn’t borrow money from taxpayers in order to finance a project that includes his own company.”

In a statement addressing the accusations, the Transport Ministry rebuked “the attempts to portray Araxis Engineering as a beneficiary” of the project, saying that it “has no connection to the Engineering City project” and that the company was terminated on May 22, 2018. The statement concluded by calling on the press “to stay away from distributing accusations fabricated by fake users.” But as of the time this report was posted, Araxis Engineering is listed as active in the state register of the legal entities, and company’s LinkedIn page lists its address as “Engineering City.”

While the minister’s official resume omits his work for Grovf, his LinkedIn profile lists him as co-founder and chief operating officer of the company from March to May 2018. An archived snapshot of Grovf’s website corroborates the LinkedIn info. Since then, the page was updated to remove any mention of Arshakyan.

Arshakyan’s private sector career was interrupted by the Pashinyan-led “Velvet Revolution.” Arshakyan had been a longtime member of Civil Contract, the party Pashinyan leads, and in May he was named first deputy minister of transport, communication and IT.

Pashinyan’s November announcement of Engineering City neglected to mention that the project had actually been already launched by the previous government: then-Prime Minister Karen Karapetyan launched the project at a March cabinet meeting. But in the interim, the responsibility for Engineering City was taken away from the Ministry of Economic Development and assigned to Arshakyan’s ministry.

It’s unclear what motivated the bureaucratic move, which served to create a much more blatant conflict of interest. But in the weeks before the decision, the economic development ministry fought to keep control of the project, an internal dispute that was first reported by panorama.am.

Eurasianet was able to independently verify that account and to establish the date of communication between the two agencies: August 1, 2018. After the project had been re-assigned in September, the economic development ministry conceded and made no attempts to reclaim it, a ministry official told Eurasianet. The official spoke on the condition of anonymity, citing the sensitive nature of the information.

And when the minister of transport, communication and IT was fired, in October, Arshakyan assumed the position.

His official job quickly intersected with his former private career: In October, shortly after being appointed minister, Arshakyan showed Secretary General of the International Telecommunication Union (ITU) Houlin Zhao around Engineering City, including introducing him to his former business partners at Grofv, a company press release reported.

A spokesperson for Arshakyan did not respond to Eurasianet's requests for comment.