The formerly ruling Republican Party was shut out of parliament, leaving the new government with no true opposition. 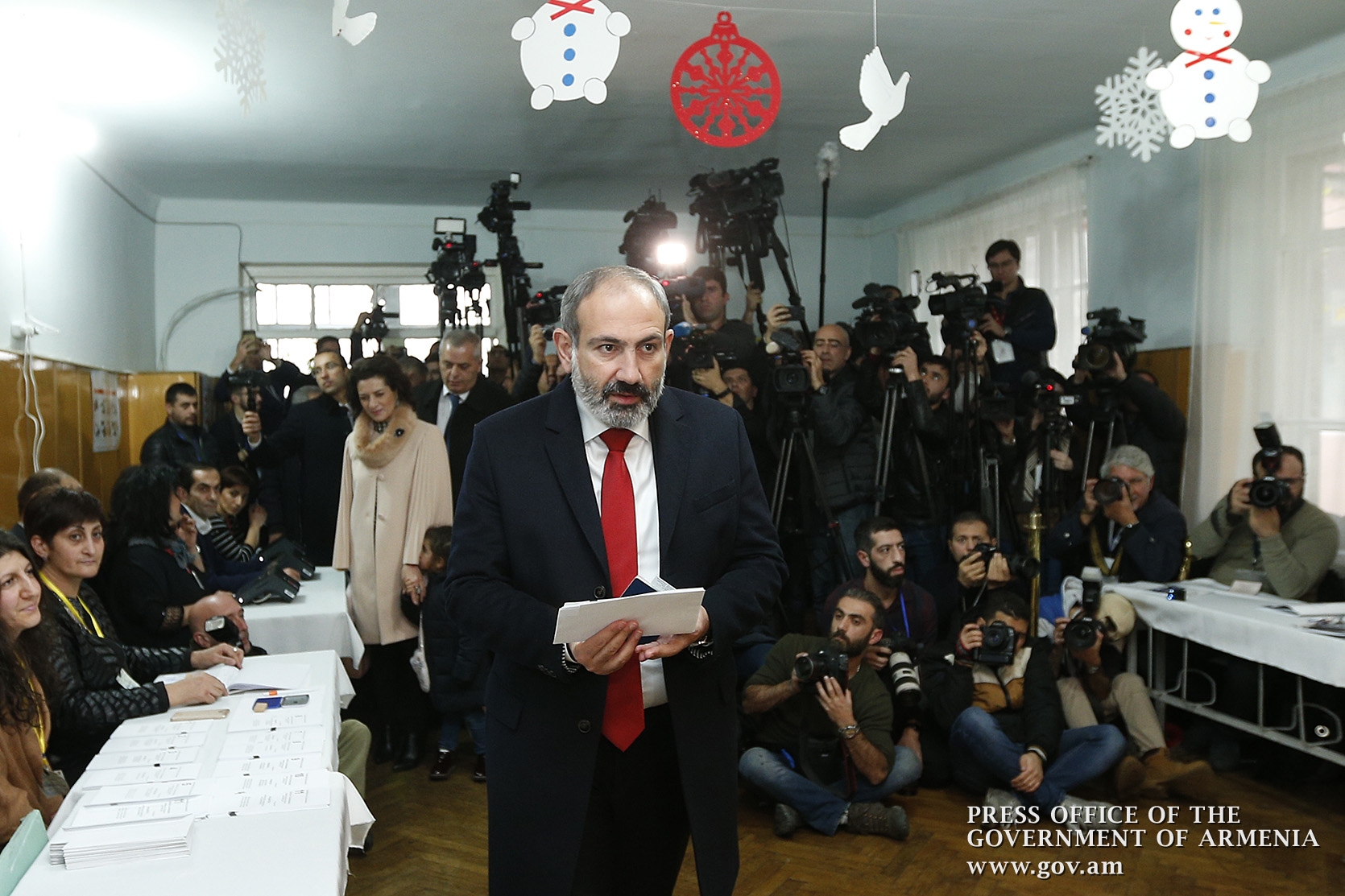 Armenian Prime Minister Nikol Pashinyan has won a resounding victory in parliamentary elections, taking more than 70 percent of the vote, the country’s electoral commission has announced. He will have a largely pliant parliament to work with, as the other two parties that passed the threshold are expected to put up little resistance.

The December 9 election also saw a humiliating defeat for the formerly ruling party, the Republican Party of Armenia, which got 4.7 percent of the vote and will be left out of parliament after dominating Armenian politics for more than a decade. The party’s rule effectively ended this spring after massive street protests, led by Pashinyan, forced the government to resign. But until this election they continued to hold a majority in parliament.

“Powerful, mighty people!” Pashinyan wrote on his Facebook page after the results were announced. “I love you all, I am proud of you all, I bow before you all.”

The Central Election Commission announced on December 10 that Pashinyan’s My Step alliance won 70.44 percent of the vote. Prosperous Armenia, the party led by oligarch Gagik Tsarukyan, took second with 8.27 percent. Bright Armenia, the party that was in a bloc together with Pashinyan’s party in the outgoing parliament, took third with 6.37 percent.

“The landslide victory means institutionalization of the results of the revolution,” said Anahit Shirinyan, a Yerevan-based analyst for the think tank Chatham House. “If so far [Pashinyan] has had de facto legitimacy, now he has de jure legitimacy and authority.”

At a polling station in Echmiadzin, a small city just outside Yerevan and the ancient seat of the Armenian church, a poster at the entrance reminded voters: “Don’t Sell Your Vote.” Previous elections in Armenia have been marred by wide-scale violations, including bribery, but the new government criminalized vote-buying.

“He [Pashinyan] is clean, that’s the most important thing,” said Zorik Babayan, the 60-something director of an art school in Echmiadzin, after voting for My Step. “He’s the one who can carry Armenia forward.”

Babayan predicted a defeat for the Republicans. “No one is going to vote for them,” he said. “For twenty years, our people moved backwards, not forwards. They are corrupt, everyone knows it.”

Only one voter surveyed by Eurasianet didn’t plan to vote for My Step, and she was still a supporter: Nelly Muradyan, a 20-something with fluent English, said she voted for Bright Armenia in order to ensure a supportive opposition for Pashinyan. “I don’t see very much difference between them and My Step,” she said, referring to Bright Armenia. “It’s not right to have only one party, so I decided to give my vote to one that has a similar voice to Nikol Pashinyan.”

Turnout was under 49 percent, compared to more than 60 percent in the last parliamentary elections in April 2017. Analysts explained the drop – in an election that Pashinyan portrayed a pivotal to cementing the gains of the “revolution” – by the fact that the various unsavory methods that the former authorities had used to get votes were abandoned in this race.

In the last elections, political scientist Hrant Mikaelyan calculated that up to 350,000 votes were “mobilized artificially,” he told Eurasianet, making the turnout in this election roughly similar if those votes were discounted. The 49 percent figure is also misleading, he added, because the voter rolls contain many Armenians who live outside the country. Based on Mikaelyan’s estimates of the population actually living in Armenia, the turnout amounted to about 62 percent of those voters. “That is not very high, given the situation, but it’s not low either,” he said.

Pashinyan, at a late-night press conference after the turnout figures were released, suggested that voter complacency also may have contributed to the low numbers. “People see that everyone around them is voting for the My Step Alliance and therefore they decided to go about their business since the choice has been made,” he said.

He added that he would now move to amend the country’s electoral legislation. “We already have the package of amendments but most importantly we need to have new electoral lists, to precisely know how many voters there are in Armenia at the given moment,” he said.

Electoral reform is just one item on the agenda now that Pashinyan has full control of parliament. Pashinyan will now have “more freedom to deal with critical reforms such as in the justice system or the economic sector,” Chatham House’s Shirinyan said.

But he’ll also have to manage the large expectations that he has built up among Armenians who expect him to solve the country’s many deep-rooted problems, from pervasive poverty to difficult relations with Russia to a simmering conflict with Azerbaijan.

“A crushing victory like this is a double-edged sword,” Kevork Oskanian, a political scientist at the University of Birmingham, told Eurasianet. “On the one hand, this majority will allow Pashinyan to push through any reforms – including constitutional changes – without much resistance. On the other hand, this will mean that the ‘buck’ will stop with him: It’ll be quite difficult to lay blame on anyone else should such reforms not succeed.”

The other two parties in parliament are expected to offer little resistance. Bright Armenia is a formal ally to Pashinyan, and Prosperous Armenia has thrived as a systemic opposition party through several governments thanks to its unwillingness to challenge successive ruling parties. And thus far the new government and party leader Tsarukyan have formed a comfortable cohabitation with one another.

But Armenia’s true democratization would require the demise of one-man parties like Prosperous Armenia, Oskanian said, and that could set up a conflict. “The interesting question to ask is whether Pashinyan would push through, and implement, tough legislation banning or limiting the financing of political parties by ultra-wealthy individuals. He would have to, if he’s serious about the country’s democratic development, and this is the point at which things between Pashinyan and Tsarukyan could become interesting,” he said.

The Republicans’ future is unclear, as they now face the prospect of being out of parliament for at least five years. “This is a rather long time and it’s going to be hard to keep the party together,” analyst Mikaelyan said.

Serzh Sargsyan, the former president and prime minister of Armenia, who is still chair of the Republican Party, has barely been seen in public since being drummed out of office in the spring protests. He made a rare appearance to cast his vote in a school gymnasium in Yerevan, but the machine registering his fingerprints had difficulty recognizing him, a humiliation caught on video and much mocked on Armenian social media.