Armenian youth, the ‘engine of the revolution,’ fight for a fairer society

One activist called the protests a “school for democratic engagement.” 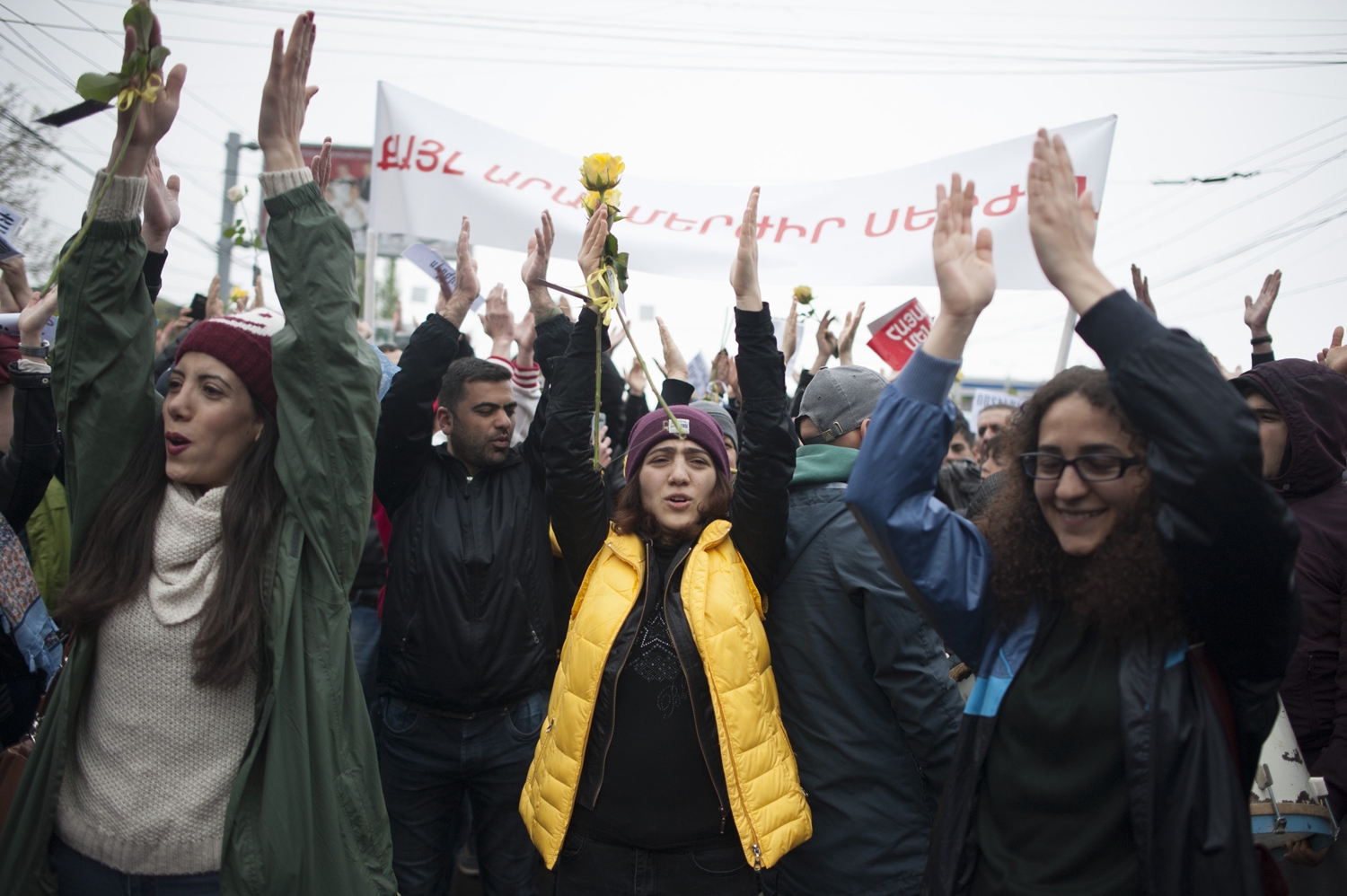 For many of the activists who took to Yerevan's streets in recent weeks to overthrow long-time leader Serzh Sargsyan, his Republican Party of Armenia – which has ruled since 1999 – is the only leadership they've ever known.

The heavy participation of young Armenians was one of the most striking features of the protest movement. University and high school students took to the streets en masse and young working class men with their white Lada Nivas blasting rabiz music became a common backdrop to the protests. In one image that went viral, children emulated their elders by erecting roadblocks with toy cars.

As a result, the relatively middle-aged Nikol Pashinyan, at 42, is expected to be elected prime minister on May 8, taking over leadership of the country from the 63-year-old Sargsyan. The transition has renewed hope among young people in a country that has long offered them few prospects.

Under Republican leadership, the official unemployment rate rose to 19 percent last year – and over 37 percent for people under 35. The country’s foreign debt has tripled since Sargsyan took office in 2008; 30 percent of the country lives below the poverty line; and Armenia's youth have been moving abroad in record numbers.

“The brain drain was a huge blow to the country – we didn’t want to leave but we also didn’t see a future here,” said Grigor Yeritsyan, 28, head of Armenian Progressive Youth, an NGO. “Pashinyan has brought back hope – and young people are now talking about staying here to rebuild their country.”

Dissatisfaction among Armenia's youth has been steadily growing, as has their organizational strength. One key learning experience was the 2015 protests known as Electric Yerevan, which started as demonstrations against high energy prices but grew into a broader movement akin to the global Occupy movement.

“I had been actively involved in politics since 2012,” said Sona Ghazaryan, 24, an activist in the #RejectSerzh movement, one of the youth-led groups that drove the protests. “But it was Electric Yerevan that changed everything. That movement’s use of social media was unprecedented and really gave use an idea of what we were capable of.”

This time, organizers took it to a different level: “We are extremely organized,” she added. “Entire teams designed logos, monitored web traffic and arranged the best times to launch certain information. Others worked on targeting different segments of society to make our message stick.”

“We got to practice real active citizenship. It was like a school for democratic engagement,” said Yeritsyan.

One major complaint among young people was the devaluing of education. In November 2017, new legislation made it more difficult for students to defer military service. Armenia, which uses conscripts to guard its borders in its conflict with neighboring Azerbaijan, has become one of the world’s most militarized societies under Republican leadership.

“It is important to keep the country safe, but the military should not dominate society,” said Davit Petrosian, 25, a student activist who led protests against the new concept last year and who has been actively organizing students in support of Pashinyan. “The concept was only designed to help the previous government keep power – it did not improve national security.”

Petrosian complained that the government has been underfunding universities to the point that some can’t afford soap or toilet paper in the bathrooms. “The Republican Party has no respect for education,” he said.

Lara Brattea, 20, a musician and activist on Republic Square says today’s young people are a forgotten generation. “The [Republican] party has no understanding of youth culture and they haven’t been investing in its development,” she said. “We want leaders who take notice of us and help young artists and musicians to thrive.”

The youth-heavy protests also allowed some marginalized groups in Armenia’s conservative society – such as feminists – to take to the political front lines.

“Young women were out chanting, ‘Serzh is not our father, we don’t need a father,’ mocking the ruling party’s patriarchal notion that Serzh would protect the country as ‘father of the nation’,” said Anna Zhamakochyan, a sociologist working for the liberal think tank Socioscope.

“Marginal views got to become part of the mainstream,” Zhamakochyan said. “Everyone from feminists and LGBT groups to bikers and religious conservatives took part.”

There were limits to the inclusiveness, however.

LGBT activists participated in the protests, but deliberately kept a relatively low profile. “Often the LGBT community is talked about as if it’s invisible,” said Mamikon Hovsepyan, an LGBT activist and founder of PINK Armenia. “Participating allowed the LGBT community to show people that they are students, shopkeepers, bus drivers and activists just like them.”

But Hovsepyan said the community made a strategic decision not to fly LGBT banners for fear of “harming” Pashinyan’s movement in the deeply conservative country. He believes nationalistic elements would have used the participation of the LGBT community to “discredit the protests.”

Sasha Sultanyan, 23, an activist for the country's small Yezidi religious minority, said the protests also brought Armenia’s national minorities out onto the streets to show that they share in the same wider struggles against corruption and nepotism.

But he also noted that the dominant message of the protests was about Armenianness. “I support the movement, of course, but the leaders have not really been thinking about minorities and often talk about the Armenian nation rather than a more inclusive, civic movement,” Sultanyan said. Part of the reason, he argues, is that Armenia needs to appeal to its large diaspora, and that talk of the Armenian people rather than citizens gains more traction overseas.

Nevertheless, on balance Sultanyan was optimistic: “Pashinyan’s team is young and well educated – we hope they will have intelligent solutions to these issues.”

The success of the movement has inspired young activists to keep pushing.

“The new authorities will struggle to contain the expectations of the youth, who have acted as the engine of the revolution,” Yeritsyan of the Armenian Progressive Youth NGO said.

“The bars and cafes in the city are alive with serious discussions about how best to organize our society,” added Ghazaryan of the #RejectSerzh movement. “We can't afford to lose this momentum.”