Armenians and Azerbaijanis are called to war

The mobilizations in both countries are the first since the war in the 1990s. 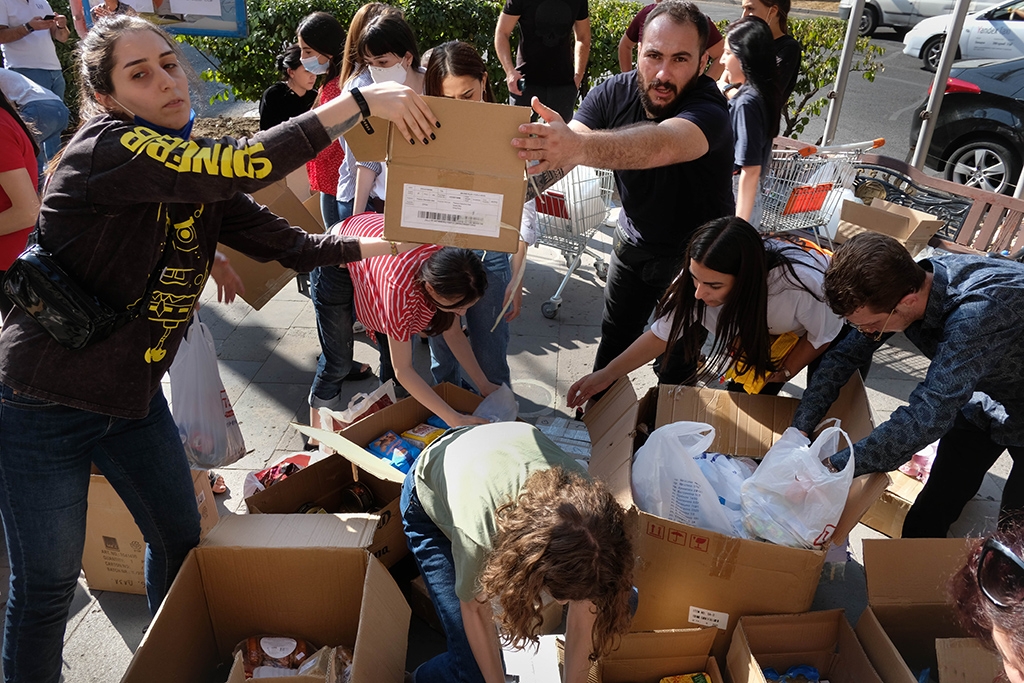 A food, clothing and medical supply drive at Yerevan Brusov State University. Volunteers gather, box and seal donations, along with letters for the soldiers on the front lines. (Photo: Winslow Martin/Eurasianet)

Reserve troops from across Armenia and Azerbaijan have been mobilized into military service as the fighting between the two sides continues with no end in sight.

This is the first time that either side has called up its reserves since the ceasefire was signed a quarter-century ago, and has underscored the seriousness of the clashes.

In Armenia, and in Armenia-controlled Nagorno-Karabakh, officials announced general mobilizations the day fighting broke out, on September 27.

One 35-year-old Azerbaijani man, who was born in Karabakh, heard from the State Service for Mobilization and Conscription early in the morning while he was still in bed. “I’m going to fight for my homeland,” he told Eurasianet. He spoke, like all sources in this story, on condition of anonymity. “We will solve this problem today and not pass it along to future generations.”

An Armenian in his late twenties was watching the television news about the fighting with his family in Yerevan when he heard from his local military commissariat. “I got the call at almost midnight” on September 28, he said. He left home to report 20 minutes later and was shipped out to Nagorno-Karabakh the next day. “This is it,” he told Eurasianet. “We don’t have a choice, we’re going all in.”

Azerbaijan launched a heavy offensive early in the morning of September 27, with the apparent aim of taking back substantial parts of the territory that Armenian forces won during the war between the two sides as the Soviet Union collapsed.

With the fighting in its fourth day, the intensity appears to be only growing, making the manpower needs for both sides uncertain. So far, the Armenian side has reported eight civilians and 80 military personnel killed. Azerbaijan has not announced the numbers of military deaths but has reported 14 civilians killed.

In both countries, military service is mandatory (with some exceptions) for young men, and after they finish they are registered in a reserve system. If the Ministry of Defense determines that it needs additional personnel, they can be called up to report to their local commissariat.

“I call on the reserve personnel to present themselves to their district commissariats. For the homeland, for victory,” Armenian Prime Minister Nikol Pashinyan posted on Facebook.

There also have been volunteers who have presented themselves at commissariats to offer to serve. In Azerbaijan, the State Service for Mobilization and Conscription has reported large numbers of people trying to volunteer.

In Armenia, some volunteers are reportedly being turned away.

“I registered but haven’t been called up, and they told us not to even volunteer because they don’t need us to pile up in Karabakh,” one Armenian man told Eurasianet. “They only need professionals now, particularly on artillery,” he said, though he thought that could change. “According to what they need everything could be mobilized very quickly. I’m expecting a call at any moment.”

In Azerbaijan, there have been cases of officers showing up at reservists’ homes and taking them directly to serve.

The mother of one 23-year-old who finished his military service a year ago told Eurasianet that some military officers appeared at their home late at night on September 27 to take her son. “He was at home, sleeping when they came and took him away,” she told Eurasianet. “I haven’t heard from him since. I don’t know where he is or what he is doing. I hope this is over soon and he can come back.”

In both countries, images of young men heading to the front lines have dominated media and – in Armenia, at least – social media. Azerbaijan has to some degree shut down social media since the beginning of the fighting, making the conversation there more muted.

Nevertheless, there has been a burst of patriotic posting under the hashtag #KarabakhIsAzerbaijan, and emotive videos of men boarding buses on their way to the war zone. Kamil Zeynalli, a prominent athlete from Baku, volunteered to serve and posted a selfie with a Kalashnikov and his new brothers in arms.

In Armenia, social media posts about volunteers and call-ups have taken a new hashtag, #WeWillWin. Champion wrestler Gegham Torogmyan volunteered to serve, which the country’s wrestling federation announced in a Facebook post reading “God protect all our soldiers.” The news website Hetq posted a photo of a young couple parting as the man boarded a bus to the front lines; they had been scheduled to be married on October 10.

All the reservists Eurasianet spoke to said they approached their upcoming duties with a sense of purpose.

A 56-year-old Baku man volunteered after his two sons had been mobilized. “This is a perfect time to start the liberation of our lands,” he said. “Chances happen only once a century. We should give credit to the Azerbaijani government for this.”

An Armenian tank specialist approached the situation with gallows humor. “I’m going to be the first one to die,” he said with a laugh. (He also asked not to be identified.) “It is what it is, what can we do? This fight is forced on us.”