Perhaps counterintuitively, the situation on the front line is the most peaceful it's been since the fighting in 2016. 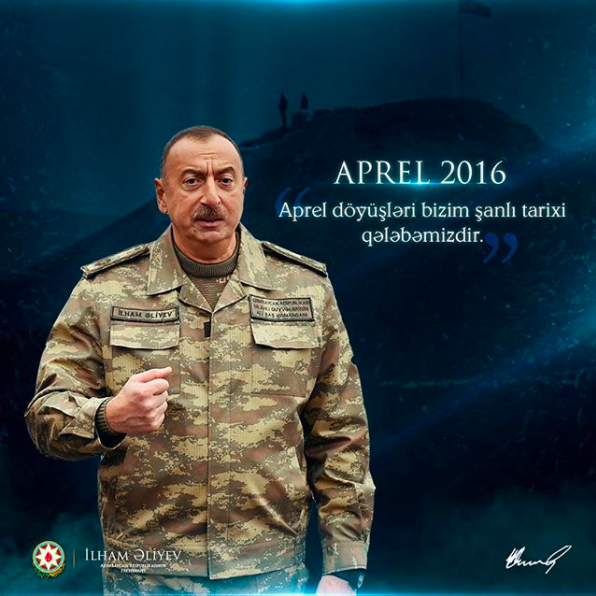 An Instagram post from Azerbaijani President Ilham Aliyev, with the caption “The April War was our glorious historical victory.”

On April 2, Armenians and Azerbaijanis marked the second anniversary of the outbreak of heavy fighting now known as the “April War” or “Four-Day War,” in which at least 200 died in the worst bloodshed since the two sides signed a cease fire in 1994.

The two sides took the occasion to blame each other for the violence and to reiterate maximalist claims, suggesting that lasting peace is as far off as ever.

Azerbaijani officials, meanwhile, claimed that their offensive was the result of Armenian artillery attacks on civilians. Trend News, a pro-government news site, commemorated the anniversary with an article arguing that “On the night of April 2, 2016, and during the day, all the frontier positions and settlements of Azerbaijan were subjected to heavy fire by the Armenian Armed Forces. Six civilians were killed, including two children aged under 16.”

Armenians argued that it was the Azerbaijanis who targeted civilians. “Two years ago, Azerbaijan launched a large-scale offensive against Artsakh/Karabakh, using artillery, rocket systems, helicopters and tens of thousands of forces,” Artak Beglaryan, the deputy ombudsman of the unrecognized Nagorno Karabakh Republic, tweeted. “Azerbaijani forces perpetrated brutal atrocities against civilians and servicemen, but got a relevant military reaction.”

“Armenia has to understand that the occupation of Azerbaijan’s lands, including the Kalbajar district, is temporary,” he said in a statement. “All responsibility falls on Armenian side for the maintenance of the status quo of occupation.”

President Ilham Aliyev, for his part, posted an image on Instagram of himself wearing military fatigues with the caption, “The April War was our glorious historical victory.” It was ostensibly posted from Lala Tepe, a bit of land that the Azerbaijanis conquered during the fighting, the first time any territory had changed hands since 1994.

Some Azerbaijanis used the anniversary to promise more territorial gains. “Azerbaijan’s military victory in 2016 has once again demonstrated that Azerbaijan has a powerful army capable of liberating its occupied territories,” Azerbaijani MP Bakhtiyar Aliyev told Trend.

He went on to argue that the Armenian side has been “creating myths” about its military capabilities, but that the 2016 conflict exposed limitations in Armenian capabilities. “If [we can’t achieve peace through negotiations], there is a mighty Azerbaijani army. According to assessments by international organizations and experts, Azerbaijan has a strong army and equipment,” the MP said.

Meanwhile, at an arms exposition in Yerevan, at which Armenia showed off its own progress in the weapons industry, visitors were shown a live feed of the line of contact with Azerbaijan.

In spite of the bellicose rhetoric, the situation around the front line is in fact unusually peaceful these days. Analyst and sometime Eurasianet contributor Emil Sanamyan noted that March 2018 was the first month since June 2016 that neither side reported a combat death: “[S]omewhat counterintuitively #Aprilwar has had a stabilizing effect on #Karabakh LoC [line of contact], at least in this short-term.”