Both societies quickly moved to help soldiers and civilians suffering with post-traumatic stress, but there are too few specialists in the region to adequately address all the needs. 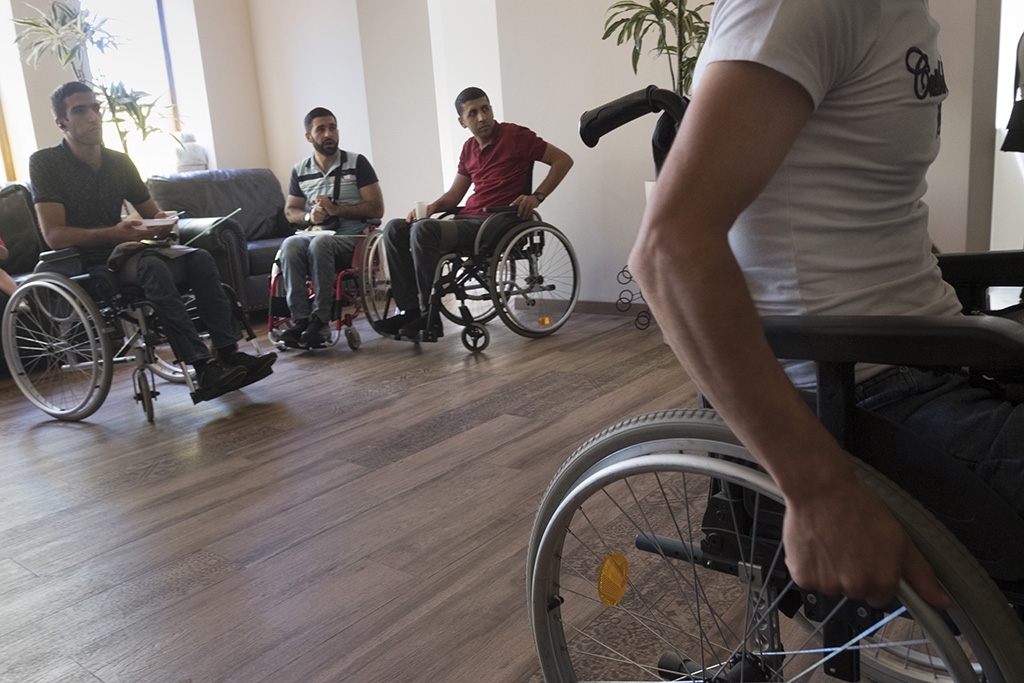 The Second Karabakh War is nearly a year in the past. But the psychological wounds on both sides of the conflict remain.

In both Armenia and Azerbaijan, soldiers and civilians continue to suffer from the aftereffects of last fall’s 44-day war. Governments and private initiatives moved quickly to bolster the two countries’ limited psychiatric capacity, but questions remain about how they will manage to deal with what promises to be a long-term problem.

It is a problem that both societies have been reckoning with for decades – since the last war they fought in the 1990s.

“For 30 years we have been in a situation of war but we still don’t have a unified system for psychological and social assistance to soldiers,” said Hayk Khachikyan, an Armenian psychologist who has counseled war veterans. “Even soldiers who serve two years [the usual term for a conscript] come back so traumatized, let alone those who took part in the war,” he told Eurasianet. “They have serious problems with social adaptation, they come back shocked, mentally crushed.”

Rey Karimoghlu, an Azerbaijani journalist and veteran of the first war, said that this winter four or five soldiers a day were contacting him asking for help with their psychological problems following the war. "This problem has existed for many years,” he told the BBC’s Azerbaijani service. “We have been talking about the need to solve this problem for so long but the problems remain. We [first-war veterans] are used to this but they [second-war veterans] are not."

Azerbaijani media have recorded eight suicides of veterans around the country as of June; seven of them had fought in last fall’s war.

Gulara Mansurova said that her son Yunis had become noticeably more aggressive after returning from the front. “He was saying some guys were not even in serious fighting and they got medals, while he went all the way to Shusha and got nothing in return; I was telling him to thank God for coming out alive,” she told Eurasianet.

When he visited the family home near Baku on leave in January, she suggested he may need help. “He would get angry, saying, ‘Why in the world do I need a psychologist?’” she recalled, in tears. “But when he was calm, he would agree, saying, ‘Let me settle my release from the army, then we will go.’” A week after arriving home, however, he hanged himself.

In Armenia, the state prosecutor’s office released a statement in June saying that it had connected a number of recent suicides and suicide attempts to post-war psychological trauma. The report described one veteran, following his suicide attempts: “After the war ended he could not sleep, he had visions of the bodies of killed soldiers, he was constantly afraid and did not want to live.”

Both societies have marshaled what resources they have to aid soldiers and others who are suffering.

During and immediately after the war, more than 100 Armenian psychologists volunteered to work with soldiers in inpatient care, holding a total of about 11,000 counseling sessions as of December 2020. “This greatly contributed to the fact that many complications that we expected to see did not develop among these people,” Armen Soghoyan, the head of the Armenian Psychiatric Association, told Eurasianet.

Soghoyan leads one of eight organizations that cooperate as the Psychological Support Consortium, which won a government tender to provide psychological help to those affected by the war. Before the government program started in June, the consortium’s member organizations were working without funding. “That couldn’t last long,” Soghoyan said. “Back then we were sitting passively, waiting to see who will come to us for help. But now the government provides us with the list [of soldiers and their family members], we contact them, invite them for consultations.”

The consortium also provides a hotline that was originally set up to address the COVID-19 pandemic. Once the war started, the hotline shifted to helping those affected by the war.

Many Armenian soldiers from the recent war who need medical care are treated at the Soldier’s Home, a rehabilitation center established in 2018 by the Ministry of Defense and Yerevan State Medical University.

At Soldier’s Home, all patients meet with psychologists to determine whether they need therapy. Apart from its therapists on staff, the center cooperates with on-call psychologists from Yerevan State University’s Center of Applied Psychology.

During the war, the center set up a rapid response project to help those injured, displaced or otherwise affected by the war. With support from the United Nations Development Program, the center established a separate psychological care initiative and has helped over 200 people during the past six months. “They undergo a sustained psychotherapeutic process, which means not one, but regular meetings, six to eight meetings on average,” said the center’s director, David Gevorgyan.

While most psychological support programs operate from Yerevan, regional initiatives also have emerged. In Kapan, in southern Armenia on the border with Azerbaijan, the local community center and NGOs provide psychological help to families displaced from Nagorno Karabakh.

When the family of one woman, who gave her name only as Gayane, was forced to flee their home in Karabakh to Kapan, her middle son began to act out, refusing to go to school and not communicating with his friends.

But Gayane started taking her son to group therapy sessions run by World Vision-Armenia and the community-run Kapan Center for Children and led by psychologist Anush Grigoryan. The sessions worked, Gayane said: “He’s great, like normal, he lives his life like he did before.”

Another member of the group, Inna, said she felt isolated before joining. “We carried all that in us. Somehow we couldn’t talk about this, share it with people, because there are people who do not understand. But here, Miss Anush does understand, it is possible to open up and talk.”

In Azerbaijan, several state agencies have initiatives aimed at helping both soldiers and civilians with post-war psychological issues. Three ministries – the Ministry of Emergency Situations, the Ministry of Labor and Social Protection, and the Ministry of Defense – each launched its own working group to help people affected by the war.

The social protection ministry oversees two agencies responsible for citizens’ appeals regarding post-war-trauma-related issues. One, the State Social-Medical Examination and Rehabilitation Agency, helps veterans get placed at one of 12 state-run rehabilitation facilities around the country. The government has been publicizing the work of these centers, emphasizing that the state is caring for those who won the war and that the country has the resources to do it.

Another public entity, the Social Services Agency, has created a hotline for veterans and families of fallen soldiers. The hotline has so far received 1,600 calls since the end of the war; psychologists and psychiatrists on the line can refer callers to online therapy sessions. The most common symptoms it has seen are stress, depression, anxiety, hallucinations, and panic attacks, the agency told Eurasianet in written responses to questions.

The agency also arranges in-person consultations. It started a week after the end of the war in the heavily hit cities of Barda and Terter, and later expanded across the country. The program lasted until the end of February, and in that time served nearly 3,000 families, the agency said.

In March, the family of Emin Safarov, who fought for Azerbaijan in last year’s war, began to fear that he was threaten his wife and children. Although by that time the Social Services Agency had stopped offering in-person consultations, it quickly responded to the family’s call and sent two psychologists to meet with them, Safarov’s wife, Parvana Safarova, told Eurasianet.

“They listened to all of us. We felt much better after the meeting. They talked to the city hospital and agreed with the psychologist there to work with Emin,” Safarova said. After a few sessions with that psychologist Emin decided to stop, saying that the conversations reminded him too much of the “bloody” days of the war, but Safarova said she hopes he will eventually start again.

Azerbaijan has “a shortage of specialists” qualified to help with people suffering from post-traumatic stress disorders, said Azad Isazade, a psychologist who worked in camps for displaced people following the First Karabakh War. But he said he hopes that the experiences gained from the more recent conflict will advance the field in Azerbaijan and help educate a new generation of psychologists.

In Armenia, too, there is a lack of qualified specialists. “The level of professional training is far from being optimal,” said Gevorgyan of the Center of Applied Psychology. “There are of course some very good specialists, there also are many who took refresher courses, but it is worrying how often we witness a dilettantish approach.”

“Even counting not very good ones, we don’t have enough specialists to ensure 100 percent accessibility” to those who need help, he said.

Funding, too, is uncertain. In August, the charitable organization All Armenia Fund announced that it was ending a project paying for veterans to receive psychological care. Government funding for the Psychological Support Consortium also is scheduled to expire by winter.

But Soghoyan of the Armenian Psychiatric Association said he hopes the program can be extended, perhaps with support from international organizations. “This is drastically needed. Ending the project would be a problem,” he said.