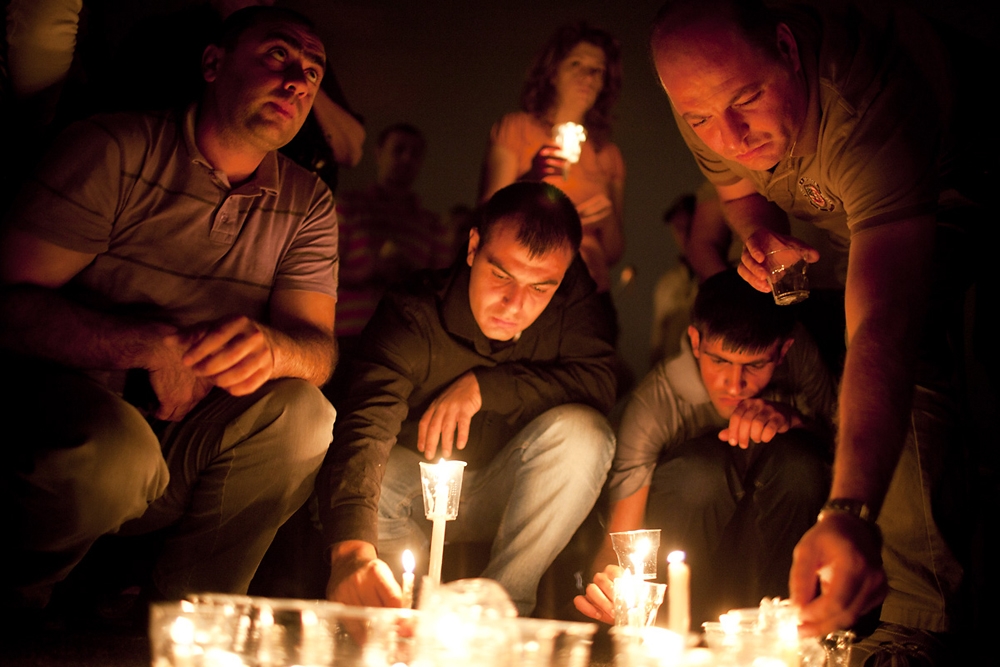 The June 29 death of an army doctor after a brutal beating by guards at a Yerevan restaurant has sparked an emotional outcry in Armenia against the use of private bodyguards.

But to most Armenians, these are no Kevin Costners. TV series and stereotypes alike depict private bodyguards as unthinking muscle machines, heavily adorned with gold jewelry, who automatically obey their “masters’” commands to inflict violence. Their existence, dating back to Soviet times, is seen by critics as a natural by-product of the corruption that plagues Armenian business and politics.

“They’re kind of morons, monster-like characters who would kill you if you dare approach them,” charged pollster Aharon Adibekian.

Thirty-three-year-old Vahe Avetian never regained consciousness after his June 17 beating by guards at Harsnakar, a Yerevan restaurant owned by Ruben Hayrapetian, the chairman of Armenia’s Football Federation and a parliamentarian for the ruling Republican Party of Armenia. Avetian, an army doctor, had gone to the restaurant for a party with friends and, reportedly, became embroiled in a verbal dispute with a waiter over the establishment’s dress code.

Taking to the streets, protesters have demanded that Hayrapetian, a 49-year-old multi-millionaire businessman with interests in tobacco, textiles, gas stations and a hotel, lose his seat in parliament and face criminal responsibility for Avetian’s death. They have called for a boycott of Harsnakar, the wall of which is already covered with flyers calling it a “slaughterhouse,” a “crime site,” and for the “end to oligarchy.”

“Those behind this crime and those who committed this must be held responsible both in the courtroom and before the public for spitting upon us, for killing us and destroying the human in us,” fumed human rights activist Arthur Sakunts, chairperson of the Helsinki Assembly’s office in the eastern town of Vanadzor.

Opposition-friendly media have cited unnamed restaurant-related sources who claim that the Football Federation boss, popularly known as “Rubo the German” [allegedly for a relative’s cursing of German soldiers during World War II], personally ordered the guards to punish Avetian and his companions.

For many, the Avetian case brings back sour memories of the 2001 murder of Georgian citizen Poghos Poghosian, who was beaten to death in a Yerevan café’s bathroom by the bodyguard of then President Robert Kocharian. The bodyguard, Aghamal “Cuckoo” Harutiunian, was given a two-year suspended prison sentence for negligent homicide.

Critics charge that Poghosian’s case shows that two criminal codes exist in Armenia – one for those with connections to the powerful, and one for ordinary citizens.

“If they hadn’t gotten away with the … incident then, this wouldn’t have happened either,” argued Aram Manukian, a senior member of the opposition Armenian National Congress. “Where are our generals, the actors from popular TV series?” he asked in reference to prominent public figures. “Why are they keeping silent now?”

For the past eight years, Armenia has debated the need for a special law on bodyguards that would require bodyguards to have a license, to have received professional training and to follow a specified code of behavior. The nationalist opposition Armenian Revolutionary Federation and the Republican Party of Armenia have drafted a joint bill on the issue, but the draft has not yet been put to a vote.

Amidst ongoing manoeuvring for next year’s presidential elections, all of Armenia’s main opposition parties have loudly condemned Avetian’s death and what they characterize as the lack of equal justice before the law.

“This is such a scandalous incident that all of us should express our protest against this,” said Prosperous Armenia parliamentarian Naira Zohrabian during Avetian’s July 2 funeral.

With one eye on its accused MP, the Republican Party of Armenia itself appears somewhat divided on the topic.

In June 17 comments reported by Vestnik Kavkaza, Galust Sahakian, head of the party’s parliamentary faction, argued that “when a politician runs to such services [private bodyguards], he should quit politics.” The draft law regulating bodyguards will become law by 2013, he predicted.

In comments to EurasiaNet.org, however, Republican Party spokesperson and parliamentarian Eduard Sharmazanov pushed away from the notion that Hayrapetian carries responsibility for the doctor’s death.

“One should not see political implications behind the incident in Harsnakar,” argued Sharmazanov. “What has Hayrapetian to do with this?” he asked, describing the businessman as “a decent and moral person.”

“This is an incident that happened. The police will handle this legally, and those guilty will be punished,” he said.

In an apparent attempt to show that the government is not ignoring Avetian’s death, Defense Minister Seyran Ohanian visited the doctor’s family on the day of his July 2 funeral in Yerevan.

But, for now, civil-society activists do not appear to expect much from the government in terms of a crackdown on bodyguards. Instead, they are banking on public solidarity to bring change.

Said military-reform activist Tsovinar Nazarian at a June 30 candlelight protest outside of the Harsnakar restaurant: “Our unity today puts pressure on criminal oligarchs, their guards, and various nicknamed characters in general.”