Armenians feel they are facing their fight alone

While Armenians have been disappointed by the lack of a strong international response to the war with Azerbaijan, the isolation also has encouraged a sense of unity and solidarity. 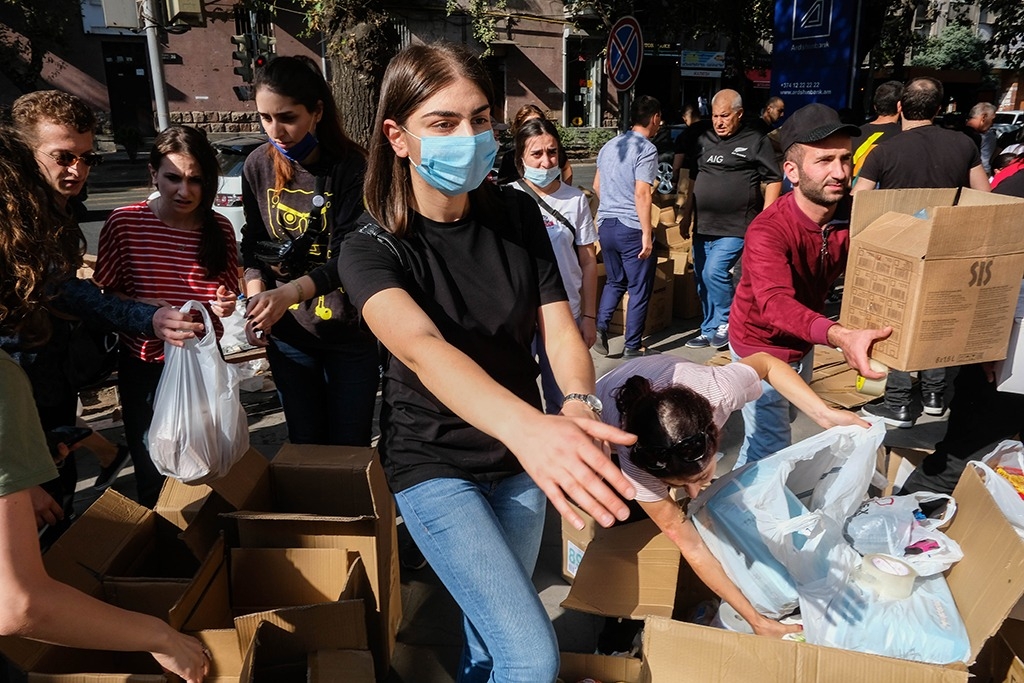 Two weeks into their most momentous war in a generation, Armenians feel like they are fighting for their lives – and that they are doing it alone.

The international community has stayed relatively unengaged during the ongoing conflict with Azerbaijan, a fact that has frustrated Armenians – but also strengthened their sense of internal unity.

“Armenia is in a sense alone,” said Gayane Simonyan, a 29-year-old IT worker who has temporarily left her job to organize aid for refugees from Nagorno-Karabakh, whose ethnic Armenian residents have been subject to a punishing bombing campaign from Azerbaijan, forcing tens of thousands of them to flee to Armenia.

Simonyan noted that Russia, a treaty ally of Armenia, has largely been standing aside as the fighting raged, and that the United States is a NATO ally of Turkey, which has been heavily backing Azerbaijan.

“Armenians always have been alone in their fights, and that is what’s happening this time as well,” she told Eurasianet.

In his rhetoric, Prime Minister Nikol Pashinyan has invoked the example of Sardarapat, the legendary 1918 battle in which greatly outmanned Armenian forces, on their own, fought back an advancing Ottoman Empire.

“This is our Sardarapat,” Pashinyan said in an October 3 televised address to the nation. “Their goal is not territory, their goal is to finish the Armenian genocide.”

The heavy Turkish involvement in the Azerbaijani offensive has brought up inevitable resonances with the 1915 genocide, in which the Ottoman Empire massacred or drove out nearly its entire population of ethnic Armenians.

The sense of threat from Turkey is such that Azerbaijan has receded to a secondary place in the Armenian discourse about the war.

“By getting involved in this conflict, Turkey has forced our hand, we will fight till the last drop of blood before we live under Turks,” said one Lebanese-born Armenian, who spoke to Eurasianet on condition of anonymity.

Immediately after fighting started on September 27 with a heavy Azerbaijani offensive, Armenian social media users began appealing to the international community for a strong reaction against Azerbaijan and its Turkish backers.

International soccer superstar Henrikh Mkhitaryan issued a call on Twitter for the leaders of the United States, France, and Russia to be more active in bringing an end to the fighting. “Our youth is dying on the front line,” he wrote. “I am calling on you to use your full power in halting this human tragedy.”

During the conflict Armenia has gotten much sympathetic coverage from the international media, and voices of support from politicians and other figures around the world. Armenians were cheered by a recent European Union parliament hearing on the conflict in which politician after politician stood up to support Armenia and criticize Azerbaijan and Turkey.

But little concrete has come of that moral support and as time has passed, many Armenians have come to lose hope in a strong international response. One popular hashtag, #DontBeBlind, speaks to Armenians’ sense that the world is not looking as closely as it should be.

Olympic champion wrestler Arthur Aleksanyan complained in an October 5 Instagram post about the inaction of the international community. “You have been silent about it while the children, mothers, and youth of Armenia are left alone with terrorists,” he wrote. “It is impossible to think anything but that THE WORLD HAS GONE BLIND FROM AZERI OIL AND PETRODOLLARS.”

One popular social media post going around among Armenians has quoted Martin Luther King, Jr.: “In the end, we will remember not the words of our enemies, but the silence of our friends.”

As the international community stands aside, many Armenians are reaching into a well of national unity and solidarity. “We can’t put our hope in anyone,” said Hrant Svyatelski, a 41-year-old who was an intelligence officer in the war with Azerbaijan in the 1990s.

“Nobody is afraid of those terrorists,” he said, referring to Syrian mercenaries that Turkey is widely reported to have hired to help the Azerbaijani armed forces. “There are no better fighters that Karabakhtsis,” he told Eurasianet. “In the worst case this will turn into a guerrilla war because nobody will leave Karabakh. So many things happened that mean that we can’t forgive them and they can’t forgive us.”

The sense of existential threat has led some Armenians to consider radical moves if the war continues.

“Either we lose everything or win, there is no other choice,” said Arsen Galstyan, a 32-year-old IT worker. “Armenians could disappear, and we can’t accept that. So there is a big chance the entire country could turn into ASALA.”

ASALA, the Armenian Secret Army for the Liberation of Armenia, was a terrorist group that operated in the 1970s and 80s, assassinating more than 30 Turkish diplomats around the world for that country’s refusal to acknowledge the genocide.

“I have full faith in the Armenian army, we have no choice but to win – the other option is to be ethnically cleansed” from Karabakh, said the Lebanese-born Armenian, who was discussing the war with some friends in a central Yerevan cafe. “But even if that starts to happen another ASALA will come, and this time every silent country that stood and watched as we were massacred will again live in fear.”

Another young woman interrupted with a grim joke: “If that happens, we’ll just bomb our own nuclear plant,” she said, referring to the Metsamor nuclear energy facility. “Why not? If we don’t get to live, no one else does either.”

For now, though, most Armenians see no room for such despair.

“People are confident and unified and we’re not expecting any military support at the moment, we just need support on the diplomatic front to block Turkey from involving more forces” in the conflict, said Vahan Khachatryan, a 29-year-old filmmaker who had just returned from Karabakh. “There is a feeling that only we have our backs, and that’s a great feeling.”