About 40,000 civilians have fled from Karabakh into Armenia, where they are being accommodated in schools, hotels, and in volunteers’ homes. 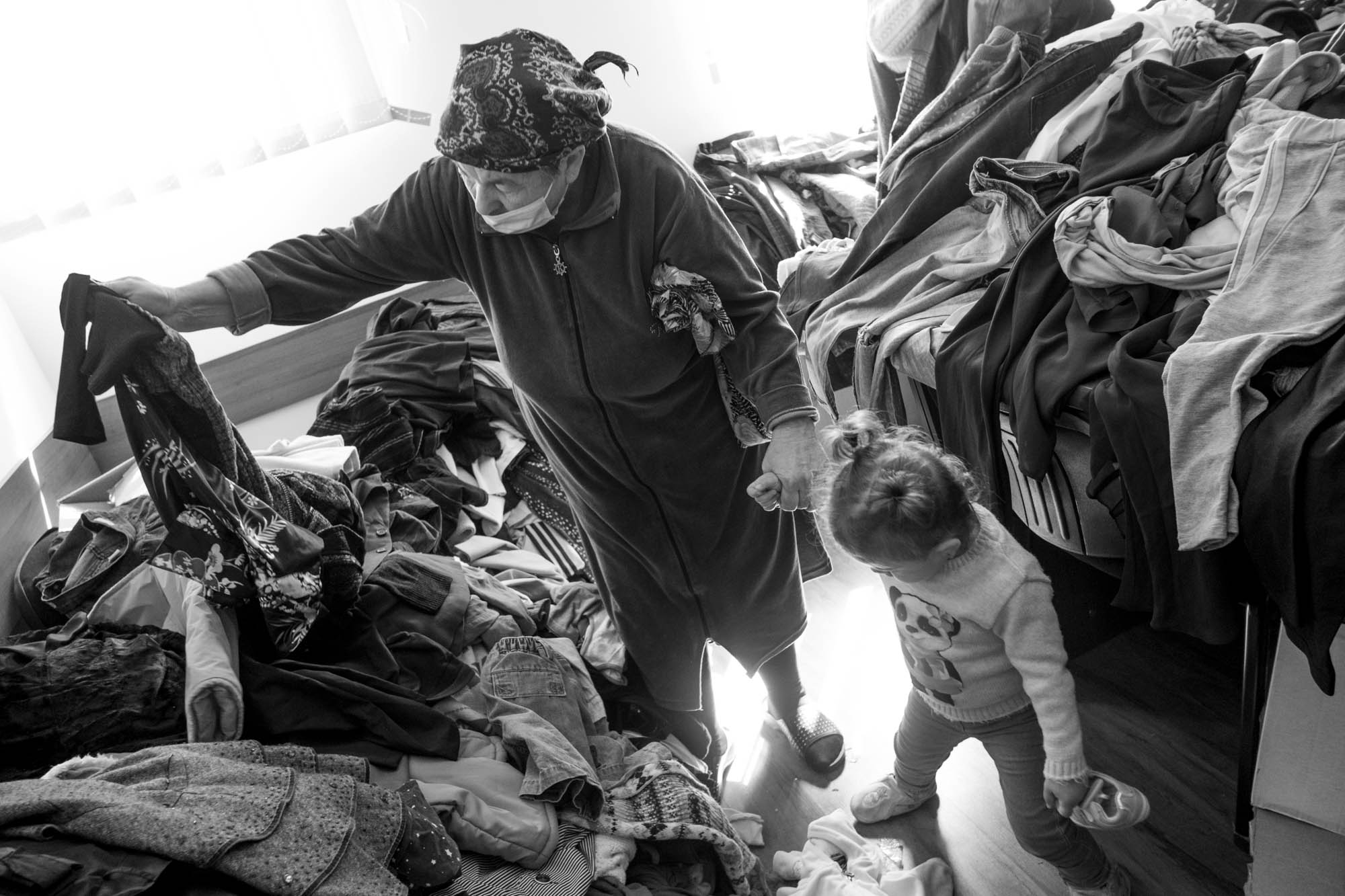 A woman from Karabakh and her grandchild look through clothing donations at the Masis town hall. (photo: Winslow Martin)

Vardider Nahabetyan sat on a folding chair and waited to find out where her new home would be.

She was surrounded by dozens of others doing the same; the women’s headscarves and the men’s baggy sweaters marked them as villagers. Nahabetyan and her family raised pigs, cows, and horses in her home village of Jivani, on the eastern edge of Nagorno-Karabakh.

When Azerbaijani forces began their offensive at the end of September to retake control of the territory, the Nahabetyans held on for a couple of weeks. But in the end they were forced to flee.

“The Turks attacked,” she said. “They were bombing every day, it became impossible to live there.” (Her precise reference was unclear: Among many Armenians “Turks” has long been a slur for Azerbaijanis; but in this war Azerbaijan also has gotten substantial military backing from Turkey.)

Eventually she made it to this Yerevan community center, one of tens of thousands of civilians who have been displaced in the war between Armenians and Azerbaijanis.

About 90,000 people have been displaced as a result of the war, according to government estimates. Most of those have moved to safer places away from the heaviest fighting, either within Armenia or Nagorno-Karabakh. But about 40,000 have crossed the border from Karabakh into Armenia, said Tatevik Stepanyan, Armenia’s Deputy Minister of Labor and Social Affairs. That’s out of a total population of about 150,000 in the territory.

Azerbaijan’s government has reported about 40,000 civilians displaced from areas near the fighting.

In the first few days the evacuation of Armenians from Karabakh was done via local ad hoc organization – “in a very Armenian way,” Stepanyan told Eurasianet. It’s subsequently become more systematized, based on emergency plans that the ministry had previously developed.

On the border between Karabakh and Armenia, there are aid workers registering each person, and buses waiting to ferry them to different locations across Armenia. People with family in Armenia to stay with are transported to those places, and everyone else gets bused to the community center in Yerevan, which ministry officials call the “triage center.”

(People who have fled from Karabakh to Armenia are not technically, according to international law, refugees, since Karabakh residents usually have Armenian passports. They are thus formally classified as “spontaneous arrivals.”)

The triage center has been appropriated from a local branch of the international scout movement run by the Armenian General Benevolent Union, a New York-based charity group.

The center is staffed mostly by volunteers, including many scouts. They feed and shelter the arrivals – there are several rooms filled with rows of beds – until more comfortable accommodation can be found for them, usually within a day or two, at hotels, schools, or in private homes.

The staff also help occupy the many children who fled. One volunteer showed Eurasianet photographs of drawings that some of the children who passed through had done, including of a house with a tree in the front yard that had been destroyed in the fighting.

New arrivals get their temperatures checked and are handed face masks, too. Many of them have spent days or weeks in cramped underground shelters in Karabakh where COVID-19 runs rampant. “If they’ve been in Stepanakert or Shushi [the two largest cities], if they’ve been in basements with 20-30 people, then we’re more vigilant,” said Varuzhan Mazmanyan, a doctor who volunteers at the center. “If they have symptoms, we send them out immediately to get tested.”

Once they are settled, they continue to receive support from local authorities across the country.

At a repurposed theater in the southern city of Goris, the Armenian city closest to Karabakh, are stacked huge boxes of pasta, bags of potatoes, diapers, and other necessities. The warehouse is run by the local mayor’s office and staffed largely by enthusiastic teenagers, who gather the provisions to be shipped out to spots around the province where the new arrivals have settled.

The products come from different sources – the government buys some, and individuals and companies donate others. “For me, it’s a really amazing cooperation between NGOs, the government, and the business sector,” Stepanyan, the deputy minister, said.

Some of the volunteers themselves are from Karabakh, like 17-year-old Yana Mirzoyan, whose family fled Stepanakert the day after the fighting started on September 27. When the Azerbaijani bombings began, “we thought it was a storm or maybe an earthquake. I’d never heard anything like it, it was so scary,” she said.

The Ministry of Labor and Social Affairs has also worked out agreements with other ministries to ease the transition for those fleeing from Karabakh, Stepanyan said. The Ministry of Education has allowed children from Karabakh to attend any school in Armenia they like, and the Ministry of Health now allows them to visit any state clinic. Karabakh residents also can now collect their pensions in Armenia.

On the day that Eurasianet visited the triage center it had received about 100 new arrivals, staff said. The flow of arrivals has abated for the most part, Stepanyan said: “Now, very few people are coming.”

Now, the question for those who have fled is if and when they can return. The fighting appears to have no end in sight, but Karabakhis are putting on a brave face.

Nahabetyan’s husband and two sons have remained in Karabakh, fighting. “In my heart, I know we’ll return,” she said.