Armenians Protest Putin -- But Not His Military Aid 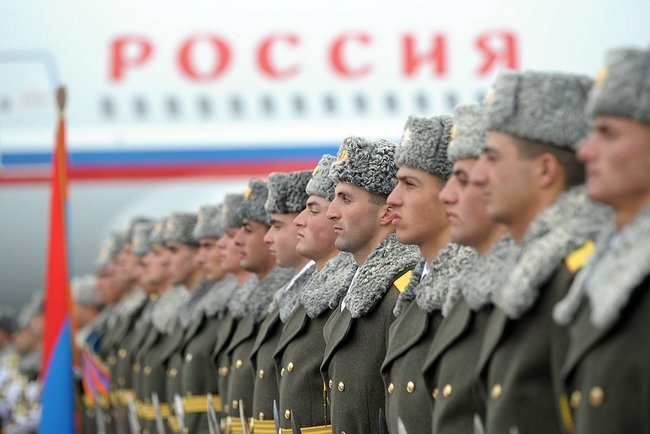 Russian President Vladimir Putin visited his country's military base in Gyumri, Armenia, while unprecedented protests against Putin took place in the capital, Yerevan. Protesters objected to Armenia's plan to join the Russia-led Customs Union -- which they say Putin bullied their president, Serzh Sargsyan, into -- and Russian pressure generally. But one key element of the Russian-Armenian relationship remains relatively unquestioned in Armenia: Russia's military role in the country.

After Russia scored some remarkable successes in getting ex-Soviet republics Armenia and Ukraine to suspend their work toward integrating with the European Union, it has faced a fierce backlash, most notably in Kiev. But even the much smaller protests in Yerevan were remarkable given Russia's role as Armenia's traditional protector against neighboring, hostile Turkey and Azerbaijan. So it was probably no coincidence that Putin chose as his entry point to Armenia the most potent symbol of Russia's protective role, the military base at Gyumri.

"We believe that the presence of Russian troops on Armenian territory helps strengthen stability and security in the South Caucasus, and increases the level of practical cooperation between Russia and Armenia – both CSTO members – in military and technical spheres," Putin said during his visit.

Putin's visit took place against the backdrop of a notable expansion in Russia's military presence in Armenia. Just in the last couple of weeks, Putin announced that Armenia would be more tightly integrated into Russia's air defense system and news emerged that Russia plans to add a helicopter squadron to its air forces in Armenia. And the commander of the Gyumri base for the first time seemed to suggest that Russia would fight Azerbaijan in the case of a renewal of fighting in the disputed territory of Nagorno Karabakh. (Though Russian Defense Minister Sergey Shoigu later appeared to walk back those remarks.) During his visit Putin promised that Armenia would get weapons supplies at domestic Russian rates, though it's not clear how this differs from current practice.

Armenia's halting attempts to move toward the EU this summer were an attempt to "divide the military-security dimension with Russia from political-economic integration with the EU and decrease the dependence on Russia," Sergey Minasyan, a Yerevan-based analyst, told The Bug Pit. That proved untenable when Russia started to press on its ex-satellites' EU ambitions, he said. The decision to join the Customs Union was based on a variety of factors, including the military ones listed above, as well as economic ones like natural gas supplies and dependence on Armenia diaspora remittances from Russia. So, Minasyan said, "if Armenia escalated with Moscow on EU/Custom Union issues it could damage or at least endanger all these issues."

And thus, unlike Ukraine, Armenia really does depend on Russia for its security. Which explains (in part) why you have a million people on the streets in Kiev and 1,000 in Yerevan -- and why those 1,000 don't raise objections to Russia's military presence in their country. This is a sensitive issue for Armenians -- and their numbers seem to be increasing -- who want to reduce their country's dependence on Russia.

"As for the Trans-Caucasus region, Russia will never leave this region. On the contrary, we will make our place here even stronger," Putin said in Gyumri. "We will strengthen our position here." In the current context, it's not clear whether that was a threat or a promise.