With Azerbaijani demonstrators settling in for the long haul on the Lachin Corridor, Armenia is questioning whether Moscow is willing or able to end the standoff. 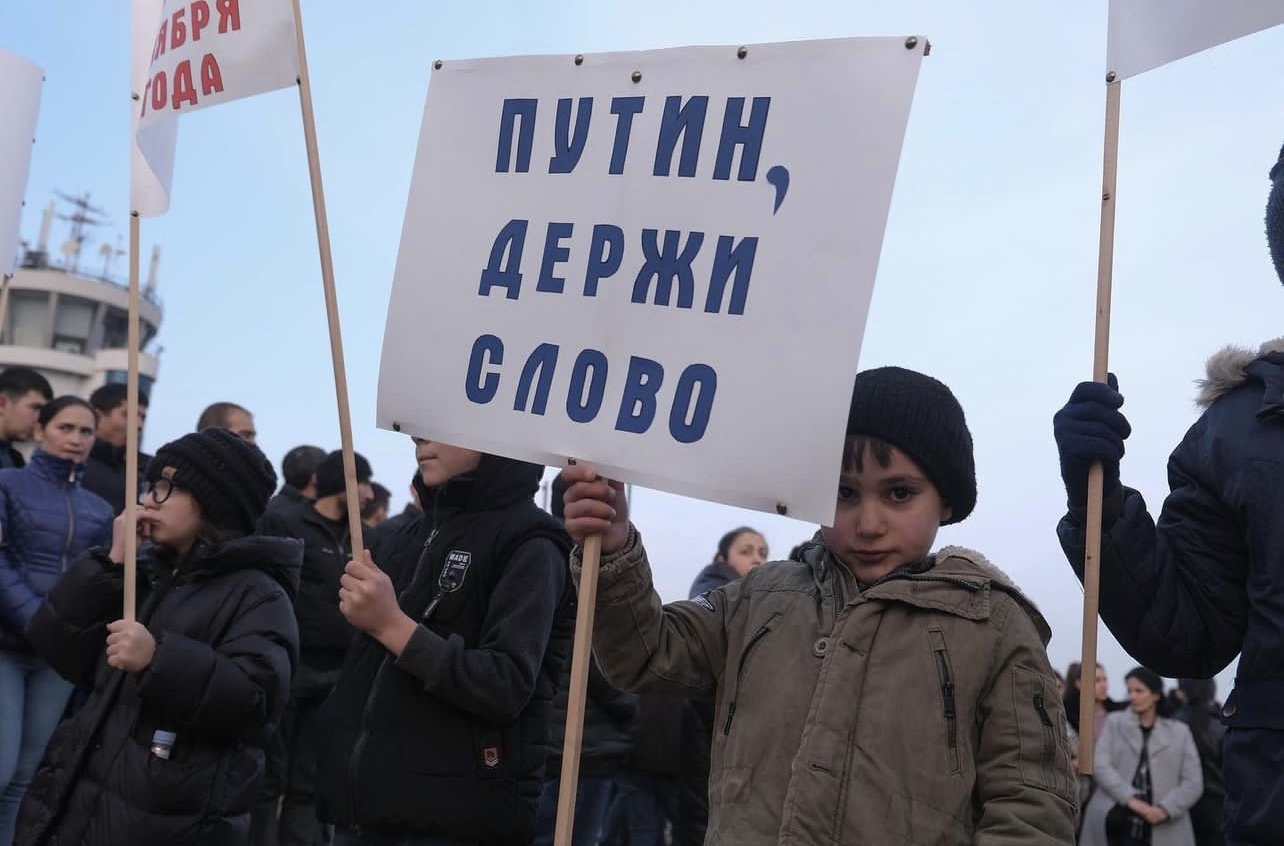 As the near-total closure of the only road in and out of Nagorno-Karabakh enters its third week, the ongoing standoff has sparked fears that the precarious humanitarian situation is threatening to undermine the fragile Moscow-brokered peace agreement that ended the war over the breakaway region two years ago.

On December 29, Armenian Prime Minister Nikol Pashinyan hit out at the Russian peacekeeping contingent stationed on the road, known as the Lachin Corridor, for failing to restore the flow of goods and people 17 days after Azerbaijani government-supported environmental protesters set up camp on the highway. “Armenia is a firm supporter of the Russian peacekeepers in Nagorno-Karabakh,” Pashinyan said during a government session, “but it is unacceptable for us that they are becoming a silent witness to the depopulation of the Nagorno-Karabakh region.”

Those comments came just days after the Secretary of Armenia's Security Council, Armen Grigoryan, argued that the crisis was a result of efforts from Russia and Belarus to push Armenia to join the Union State that already binds those two former Soviet republics. “Armenia is under pressure in this regard, but when our democratic structures resist, we receive a different type of pressure — of the military variety,” he claimed in an interview with public television.

Thousands of Karabakh Armenians turned out as part of a series of rallies on December 27 against the ongoing blockade, with dozens setting up a picket line outside the gates of the Russian peacekeeping mission’s headquarters at an unused airport near Stepanakert, the de facto capital of Karabakh. Locals held signs addressing Russian President Vladimir Putin: “keep your word,” went one; another read “we believed you.”

The Kremlin was a signatory to the tripartite agreement that ended the Second Karabakh War in November 2020. That agreement put the five-kilometer-wide Lachin Corridor under the control of Russian peacekeepers, “which will ensure the communication between Nagorno Karabakh and Armenia.” Now, supplies are running low after close to three weeks without regular shipments, and Moscow’s troops have made no attempt to move the protesters off of the road.

“In Artsakh, there is a lack of food products, fuel, medicine, and other essential items,” officials from the de facto Operational Headquarters of the Artsakh Republic told Eurasianet. Artsakh is an alternative Armenian name for the unrecognized Nagorno-Karabakh Republic. “It is obvious that the continuous closure of the road will cause a serious humanitarian crisis in Artsakh.”

Azerbaijan initially denied that the highway was being obstructed, but has since blamed both the Russians and the Armenians themselves for the standoff – insisting that the protesters have stood aside for humanitarian cargo and publishing several videos of vehicles belonging to the peacekeepers and to the Red Cross passing through the checkpoint. State media claims that Ruben Vardanyan, the newly-appointed state minister of Nagorno-Karabakh, is a Russian-backed agent of influence and has given orders for traffic to be held up on the road.

“There are no restrictions on the movement of cars on the Lachin road; there is no intention of the Azerbaijani protesters to stop traffic along the road, on the contrary, they are ready to facilitate the movement of civilian vehicles, especially ambulances, and the Azerbaijani side has taken steps to promote dialogue with local Armenian residents,” Baku’s Foreign Ministry said in a December 27 statement.

However, reports from Stepanakert show empty shelves in the central market, and several grocery stores have reportedly closed their doors to customers due to a lack of produce. “There’s no flour, sugar, oil or vegetables,” one local told Eurasianet over the telephone, “but you can still find other things – like chocolate.”

“Four hundred tons of food and medicine used to arrive in Artsakh daily from Armenia,” the operational headquarters told Eurasianet. “It is at least not serious to reason that one or two cars of medicine [passing through the Lachin Corridor] can solve the problem of the humanitarian crisis.” However, they confirmed that a number of Red Cross vehicles had been able to transport two critically ill patients to hospitals in Armenia and had brought in medicines.

The demonstrations on the road began on December 12, ostensibly over allegations the Karabakh Armenians were polluting the environment by illegally mining gold in the region, inside Azerbaijan’s internationally-recognized borders but held by its ethnic Armenian majority since a war that followed the fall of the Soviet Union. Now though, it has broadened into the most serious challenge to Russia’s role in the region for years.

“The current standoff is a win-win situation for Baku: If the eco-activists, Azerbaijani officials and ordinary citizens are allowed into Karabakh and to inspect the mines, it would mean everyone, including the Russian peacekeepers and ‘Nagorno-Karabakh Republic’ leadership acknowledges and further legitimizes Azerbaijan`s sovereignty over the territory,” Rusif Huseynov, director of Baku’s influential Topchubashov Center think tank, told Eurasianet. “If they are not allowed, then the standoff continues by further deteriorating the situation, psychologically, inside Karabakh; both sides, Azerbaijanis and Armenians, blame the Russian side.”

“In this current context, the Kremlin seems not to possess enough leverage on Baku and cannot force the Azerbaijani side to unblock the road,” Huseynov said.

On the sidelines of a meeting of the Commonwealth of Independent States in St. Petersburg on December 26, also attended by Azerbaijan President Ilham Aliyev, Pashinyan told Putin that “it turns out the Lachin Corridor is not under the control of the Russian peacekeepers.” He has since called on Moscow either to seek a United Nations mandate for its mission in Nagorno-Karabakh, or to open the door for a multinational peacekeeping contingent.

Responding to the demands from Yerevan, Kremlin press secretary Dmitry Peskov said on December 29 that “international peacekeepers can only be brought in with the agreement of both sides, not just Armenia but also Azerbaijan.” Peskov also branded Grigoryan’s claims that Moscow is using the crisis to punish Armenia for resisting joining the Union State “provocative.”

Other countries, including the United States, have since called on Azerbaijan to restore the flow of traffic through the Lachin Corridor, while the United Nations Human Rights office issued a statement earlier this week pressing “the sides to resolve pending issues through a dialogue.”

Despite growing condemnation from abroad, the Azerbaijani demonstrators on the road show no sign of giving up. Adnan Huseyn, an activist staying in the makeshift encampment told Eurasianet that “we will be here for as long as it takes, until our demands are met. For years our lands have been under occupation, and now they are being exploited illegally.”

“We’re outside in cold weather in a mountainous area – it’s not easy, but the conditions for protesters are very nice. There’s hot food, coffee, tea. I really like how clean the area is being kept and how we’ve started using eco-friendly packaging for food. Nobody can stand 24/7, so we take eight hour shifts and replace each other. There are dorms here for the construction workers, tents and mobile containers equipped with heating, so wherever there is a place to nap or take a quick shower, we do that.”

At the same time, he adds, “we’ve been face-to-face with the Russian peacekeepers, and we haven’t had any issues. We don’t provoke them and they don’t provoke us. The only issue we have is they won’t tell us why they can’t let our experts inspect the environmental damage caused by the mines.”