Armenians warily travel along “the new road” to Karabakh

Days before Azerbaijan launched an assault against Armenia, Armenians began using a new, Azerbaijan-constructed road to travel between Nagorno-Karabakh and Armenia. 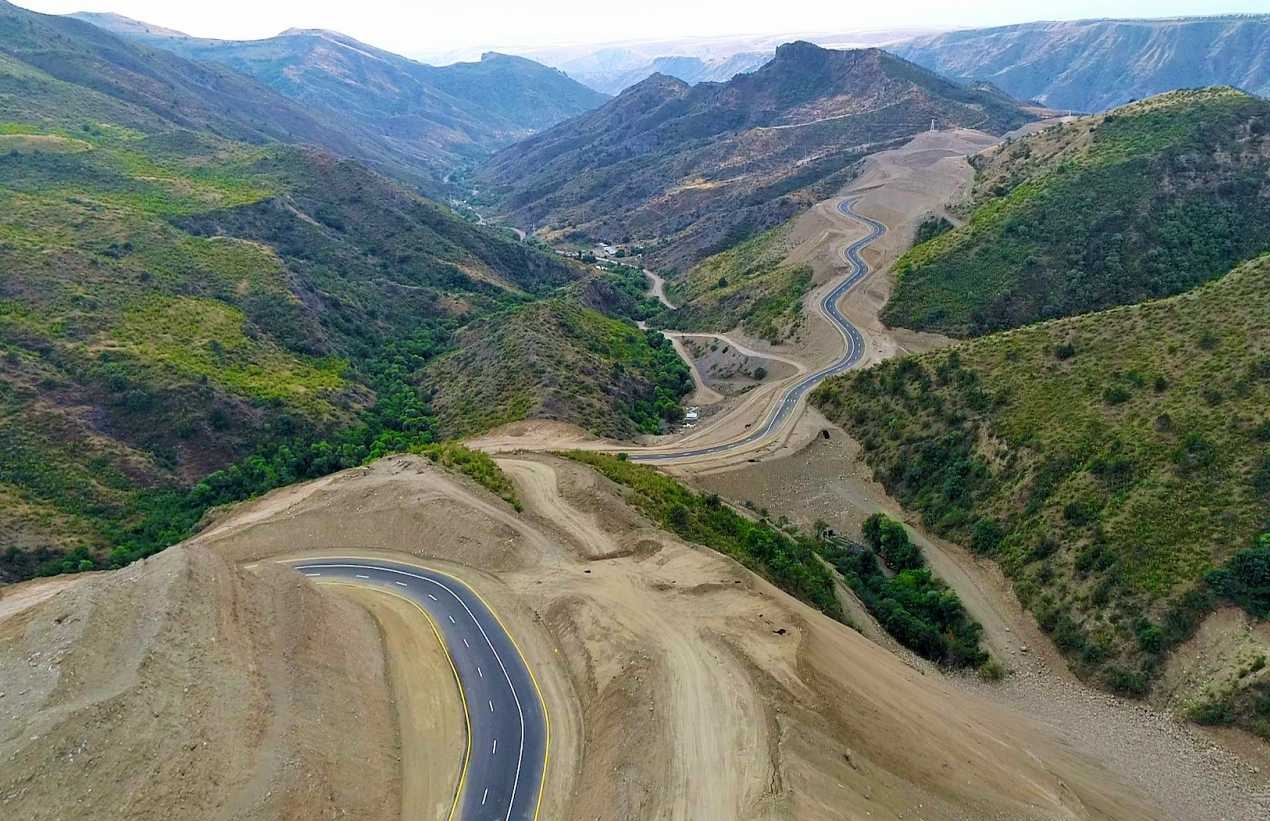 For nearly 25 years, traffic between Armenia and Nagorno-Karabakh traveled along a road known as the Lachin Corridor. It was constructed in 1998, shortly after Armenians won the territory in a war with Azerbaijan, and funded by Armenian diaspora members with money raised at a telethon. Since then, it has represented a critical lifeline for the Armenian residents of Karabakh.

On August 30 at 8 p.m., that road was closed, and traffic was immediately diverted to a new road roughly parallel to the old one, but slightly to the south. Called simply “the new road” by residents, this one has been constructed mostly by Azerbaijan, which retook the territory as part of the ceasefire agreement that ended the second war between the two sides in 2020.

The future of Armenians’ presence in Karabakh is precarious: Armenia appears to be heading toward signing a peace agreement that would cede control of Nagorno-Karabakh to Azerbaijan, which the current ethnic Armenian residents of the territory fear would lead to their ethnic cleansing.

For now, though, they have a new, modern road to travel between Armenia and Karabakh.

In a promotional video celebrating the construction by Azerbaijan’s state road agency, the narrator identified it as “the new highway that does not enter the city of Lachin.” That is the regional capital that the old road went through, and which Azerbaijan recently retook with great fanfare.

For the Armenian residents of Karabakh, the road remains their only outlet to Armenia and the outside world. While the initial reviews of the road have been good, there have been concerns about its safety as well: both about how easy it will be to drive in winter, and whether it will remain free from Azerbaijani control.

When Eurasianet's correspondent recently traveled on the new road, much was familiar: Russian peacekeepers continued to operate as they had since 2020, checking travelers’ documents at their relocated checkpoints. Some Azerbaijani construction machinery was visible from the road, apparently erecting new Russian posts. 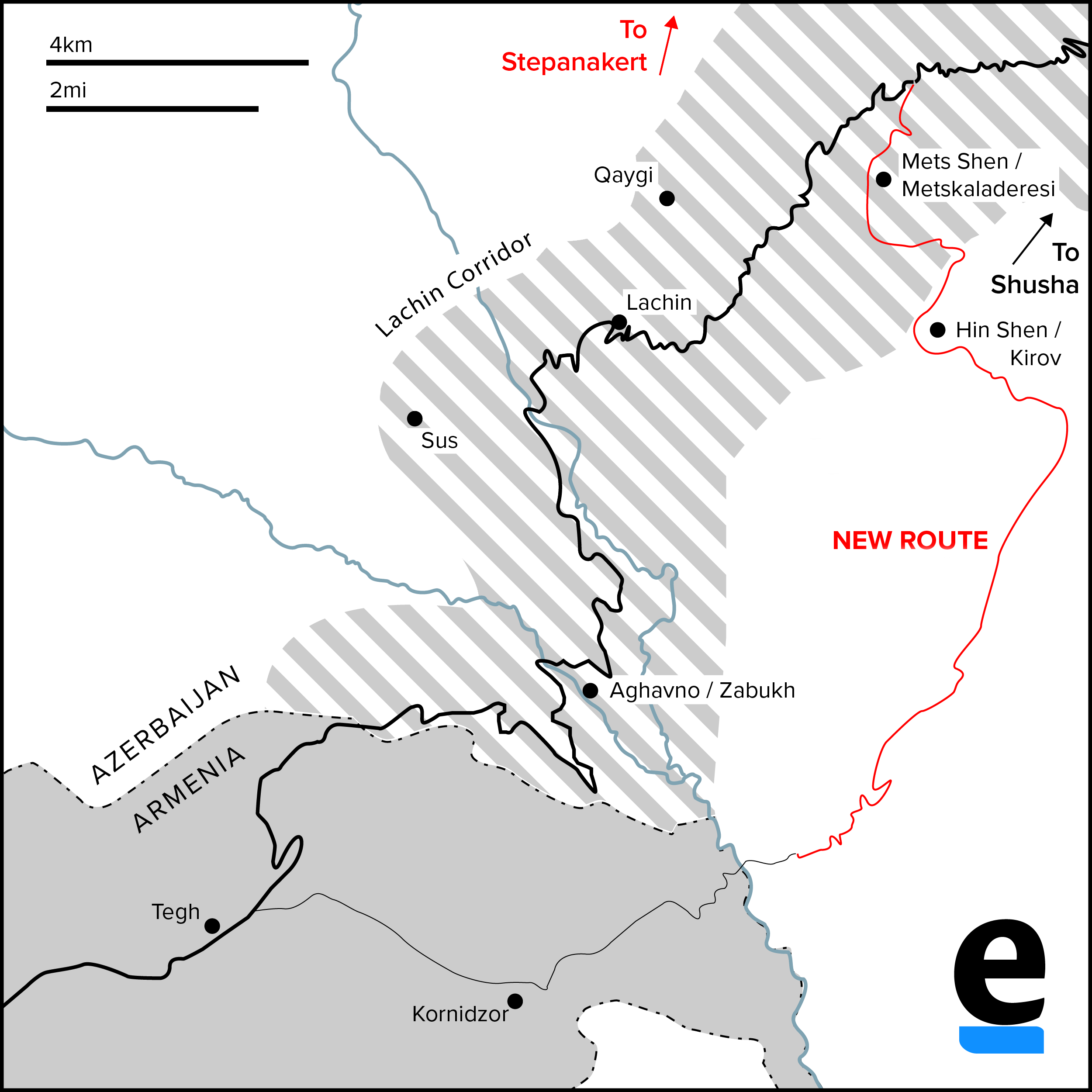 But the difference on the road itself was obvious. The new road is smoothly paved with gleaming new signs, a contrast to the old route that had become potholed from lack of maintenance. But it is also noticeably steeper in parts, with more turns, qualities that have concerned many drivers.

“There are too many turns and sharp rises. The old road was bumpy, but here the slopes are sharper and longer, and it’s not wide enough,” one taxi driver who regularly plies the route but did not want to be named told Eurasianet.

Some have worried that once winter arrives, the road may not be passable by ordinary cars.

"It seems like the winter will be difficult," one driver told local news site 1lurer.am. "The road is not appropriate for cold weather, I am going to have to get a new car. I drive a taxi, and this road is not meant for cars like that, I will need a four-wheel drive," another said.

Eurasianet’s source was not so sure. “It is dangerous in the winter, but if they plow the roads when it snows, it’s possible to manage it,” he said.

While the old road had a maximum grade of 17 percent, there are spots in the new road of up to 22 percent, said Mikael Nahapetyan, a senior member of the opposition Citizen’s Decision party.

He described the road as a dangerous “trap for Armenians” and criticized the local authorities for allowing the road to be constructed this way. “This actual ‘alternative’ road will deprive Artsakh of a stable and reliable connection with Armenia in the winter season,” he wrote in a Facebook post, using the Armenian name for Karabakh.

Nagorno-Karabakh’s de facto Ministry of Urban Development assured residents that the road meets international standards and that it will maintain the road in order to guarantee safe transit even in winter. It noted that at some of the sharpest turns, a third lane has been added for safety.

Another concern is that one Azerbaijani military post has reportedly not been moved from the route of the new road. Although the ceasefire statement calls for the Russian peacekeepers to control a five-kilometer buffer around the road, a post near the village of Kirov (which Armenians call Hin Shen) lies only about 800 meters from the new road. There have been cases of rocks apparently being dropped from above on the cars traveling along the road, which locals blame on the Azerbaijani soldiers at the post, the community leader of Hin Shen, Samvel Sargsyan, told news site 1lurer.am.

But Sargsyan also said that the road could create new economic opportunities for Hin Shen and other communities along the new route.

The new route is not entirely complete. While the ceasefire agreement stipulated that a plan for a new road should have been formulated within three years, Azerbaijan had finished most of its section in a year and a half and began to pressure Armenia to speed up its section. An early August Azerbaijani offensive appeared motivated at least in part to force a quicker pace.

That month Armenia began construction of a 10-kilometer section on its territory, which will connect the new road from the Karabakh border to the current road at the village of Tegh. In order to speed up the adoption of the new road, Karabakh Armenians quickly constructed a five-kilometer temporary bypass road to use until the new road in Armenia is complete.

“While Azerbaijan has taken consistent and rapid steps to construct a new road that will contribute to the safe and peaceful coexistence of peoples, the Armenian side is prolonging the construction of the section passing through its territory without any reason,” one member of Azerbaijan’s parliament, Mazahir Efendiyev, told the state news agency Azertac.

Armenian officials argued that, according to the ceasefire agreement, they had three years to work out a plan for the construction with Azerbaijan. Following Azerbaijan’s August offensive along the Lachin Corridor, the Secretary of Armenia’s Security Council, Armen Grigoryan said that Azerbaijan's demand to stop using the old road was not legitimate since "Armenia has not approved any plan."

Less clear is the fate of another incomplete section closer to Stepanakert. One of the primary rationales of the new road was to bypass the city of Shusha, which the current road just skirts.

But the priority was the section of the new road that went around Lachin. To many Azerbaijanis, their country’s victory in the region appeared incomplete as long as they didn’t have control of these communities. Shortly after the 2020 ceasefire was signed, Aliyev highlighted the importance of regaining control of Lachin. “If Lachin … did not return to Azerbaijan, then there could be no agreement,” he said.

Correspondingly, the entry of Azerbaijani troops into Lachin on August 26 was widely celebrated in Azerbaijan.

There seems to be less urgency for a new road bypassing Shusha, though.

“For now there's no precise plan for it,” one source in the de facto Karabakh government told Eurasianet on condition of anonymity. “The first part has been implemented but there are no discussions about the second part that will bypass Shushi [the Armenian name for the city]. It's uncertain at the moment.”

The inauguration of the road comes as Armenians and Azerbaijanis are negotiating over another strategic road, connecting Azerbaijan’s exclave of Nakhchivan to the rest of the country through Armenian territory. Azerbaijan has called the future road the “Zangezur Corridor,” and has argued that its legal arrangements should be identical to those on the Lachin Corridor.

The new road to Karabakh was “just a road, not a corridor” and that it will be part of the current negotiations over the other road, argued Azerbaijani military analyst Adalet Valiyev. “Its [the new Karabakh road’s] future status will be more related to the status given to Zangezur Corridor,” he told the news agency APA.

For their part, Armenians have rejected the comparison.

“The wording about the so-called corridor is unacceptable for us, and this is a red line for us, because in our region, according to the trilateral statement, we have one corridor, and this is the Lachin Corridor,” Pashinyan said in an interview with Al Jazeera on June 14.