The charges mark a significant escalation in the new government's legal campaign against the old regime. 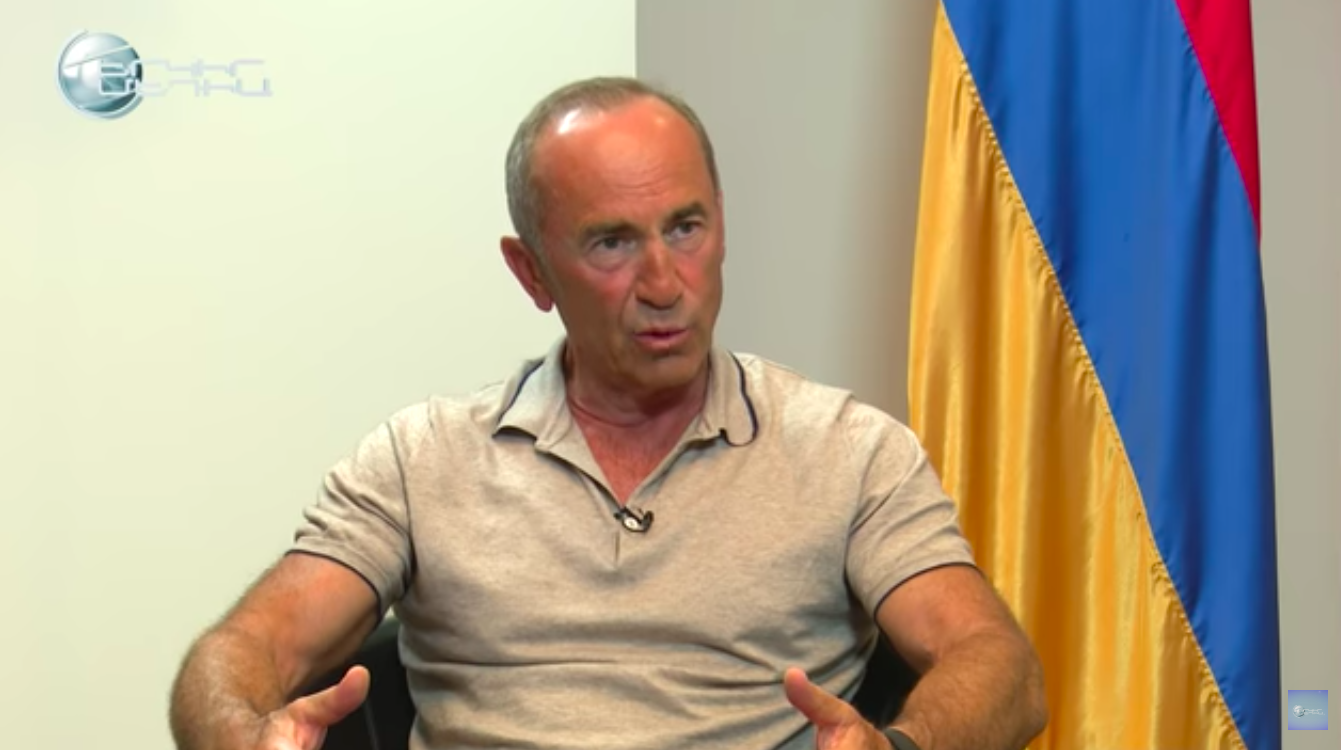 Former president of Armenia Robert Kocharyan gives a TV interview after being questioned by investigators.

The second president of Armenia, Robert Kocharyan, has appeared in a Yerevan court after having been charged with “usurping state power,” a significant escalation in the new government's legal campaign against the old regime.

Kocharyan, who has been living in Moscow, landed in Yerevan on the night of July 25 and the next day appeared for questioning at the offices of the Special Investigative Service (SIS). SIS immediately filed charges against Kocharyan and asked the Shengavit District court to detain him.

In a television interview following the three-hour questioning, Kocharyan complained that he had been invited by investigators to testify as a witness, but their first statement was that he was being instead charged with a crime.

“This is political persecution, it’s vendetta by the velvet revolution, of love and harmony… I never thought that in our reality it would be possible to create such an artificial criminal case,” he said, according to news website CivilNet. “What is happening here is a bomb under Armenia’s statehood.”

Kocharyan failed to appear at the hearing that started late that night and it was eventually rescheduled for the following morning.

The charges come out of a broad investigation that the SIS is conducting into the events of March 1, 2008. That is one of the darkest episodes in Armenia’s post-Soviet history, when demonstrators gathered in Yerevan to protest elections that they believed were stolen by Kocharyan, then the president, and his ally Serzh Sargsyan, who had just won the vote. Police and military units broke up the protests violently; two policemen and eight protesters were killed

Not long after, Kocharyan moved out of Armenia and since 2009 has served as a director for Sistema PJSFC, one of Russia’s largest investment companies.

After Nikol Pashinyan led street protests that ousted Sargsyan in April and brought Pashinyan himself to power, the SIS began a broad investigation into the events of March 2008.

Earlier in the month, the SIS revealed charges against former defense minister Mikael Harutyunyan, who also was accused of “usurping state power.” It’s still unclear whether Harutyunyan will turn himself in. A dual Armenian and Russian citizen, he resides in Moscow and the Russian constitution forbids the extradition of its citizens.

“Usurping state power” is a criminal offense under Armenia’s Criminal Code and is punishable by 10 to 15 years of prison.

The SIS explained the charges against Harutyunyan by claiming that he “and other persons” conspired to use the military against protesters by issuing an order to form a unit of military officers tasked with putting down the riots. Although the SIS still hasn’t specified how it believes Kocharyan “usurped” power, the charges may be on the same grounds.

The charges will inevitably raise questions of a conflict of interest.

The SIS reports directly to the prime minister and is headed by a political appointee. And Pashinyan has a close connection to the case: In 2008, he was part of the losing campaign of Levon Ter-Petrossian and helped organize the protests against the vote. After briefly going into hiding, he was convicted to a seven-year jail term for his role in the demonstrations. Pashinyan was released under an amnesty the following year.

In Armenia and on Armenian social media, the reaction was enthusiastic. “We've lived to see the day,” wrote RFE/RL reporter Karlen Aslanyan, echoing the mood of the many.

But Pashinyan's opponents weren't buying it.

The newspaper Armenian Times reported that also questioned on July 26 was Armen Gevorgyan, a deputy prime minister in April and May 2018. Gevorgyan was a chief of staff in both the Kocharyan and Sargsyan administrations, but is believed to be the particularly close to the former. In U.S. Embassy cables released by Wikileaks, he was described as “Kocharyan’s man” and “intensely loyal” to the second president.

Also questioned was Yuriy Khachaturov, who in 2008 was chief of the Yerevan military garrison and today is the secretary-general of the Collective Security Treaty Organization, a Russia-led security bloc of which Armenia is a member and Khachaturov its first non-Russian head.

As it happens, the flurry of charges took place as Pashinyan was in Russia, in St. Petersburg at a meeting of the Eurasian Economic Union.