A dispute over whether or not Azerbaijan had expanded its military presence on the border further has sharpened a longstanding dispute between the two sides. 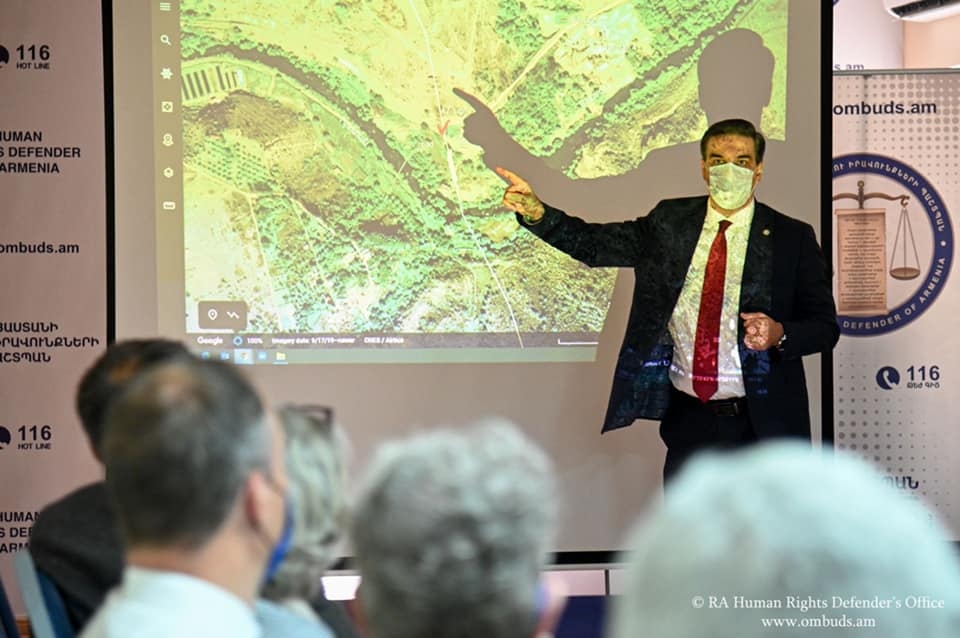 On October 18, Armenia’s outspoken human rights ombudsman Arman Tatoyan announced that Azerbaijani forces were fortifying their presence in a small bit of Gegharkunik province where they reportedly have been stationed for several months.

“They continue building new roads, increasing the number of servicemen and armaments at the posts,” Tatoyan wrote on his Facebook page. “Active engineering work is being carried out to reinforce their positions.”

The announcement prompted an unusual rebuttal from Armenia's ministry of defense, which issued a statement calling Tatoyan’s claims “obviously exaggerated” and “detached from reality.” Tatoyan shot back in another Facebook post, accusing the MoD of feeding into an Azerbaijani disinformation campaign by impugning his claims.

The confrontation represented a new spark in a long-running tension between the government and the office of the ombudsman, who has taken a highly visible role calling public attention to the fragile security situation along the Azerbaijani border following last year’s war.

Tatoyan was appointed to the post of ombudsman in 2016, two years before the “Velvet Revolution” that brought the current government, led by Prime Minister Nikol Pashinyan, to power.

Initially, Tatoyan took a low profile under the new government. But starting after last year’s defeat in the war with Azerbaijan, he has become far more outspoken. That has led to criticism that he has remained loyal to the former regime, which since last year’s war has also heavily attacked the current authorities on security issues.

Tatoyan has stayed quiet about his own political sympathies, though his take on human rights often dovetails with that of the opposition. In 2019, when the country was debating whether to ratify the anti-domestic violence Istanbul Convention, he remained on the sidelines as opposition figures assailed the government on the topic. Human rights organizations also have criticized Tatoyan for failing to properly condemn violations of LGBTQ rights.

He is regularly praised by opposition figures while sparring with government officials and ruling party members of parliament.

In one session of parliament in May, when Tatoyan presented his annual report on the work of the ombudsman’s office, Maria Karapetyan, a member from the ruling Civil Contract party, criticized the ombudsman, reminding him that he is “not a politician” and that the “aggressive tone and content” of his speech were “not appropriate for the institution that he represents.” Tatoyan responded by complaining that ruling party members “overtly falsify facts” about his work.

Tatoyan also criticized the state-run public television for becoming a “government propagandist” because, Tatoyan claimed, the channel’s news programs did not cover his statements about the situation on borders in Syunik province. In response, the leading Public TV host invited Tatoyan for an interview and accused him of taking a political position.

In March, the government proposed a bill that would reduce funding to the office of the ombudsman. Government officials denied that there was any political motive behind the bill, but some human right defenders criticized the decision as an infringement on the ombudsman’s independence.

While Tatoyan had failed in the past to act on other critical issues for human rights in Armenia, he deserved credit for his work after the war, said Nina Karapetyants, the head of Armenia’s Helsinki Association. And the government’s bill would have set a dangerous precedent for the political independence of future ombudsmen, too, she added. The government eventually withdrew the bill.

This round of conflict has dragged on, as well, with the defense ministry and Tatoyan continuing to issue mutual accusations.

And the spat has drawn in other officials. The Secretary of Armenia’s Security Council, Armen Grigoryan, accused Tatoyan of supporting the political opposition, noting in an interview with news site Rusarminfo that the ombudsman only had a few months left in his term and suggesting that when that happened Tatoyan would openly enter politics. (Tatoyan’s term ends in February 2022.)

Meanwhile, the opposition again stepped up to defend him. “While we hear from Europe that the Human Rights Defender Arman Tatoyan is a ‘Status A,’ high-class official with exceptional public trust -- which for us doesn’t even need proof -- the Secretary of the Security Council is hurrying to call him a ‘counter-revolutionary’ and biased,” wrote Lilit Galstian, an opposition member of parliament, on her Facebook page.