Over the past several days Lake Sevan has turned an alarming shade of green. The algae bloom is a symptom of the dire, complex ecological situation around the country’s biggest body of water. 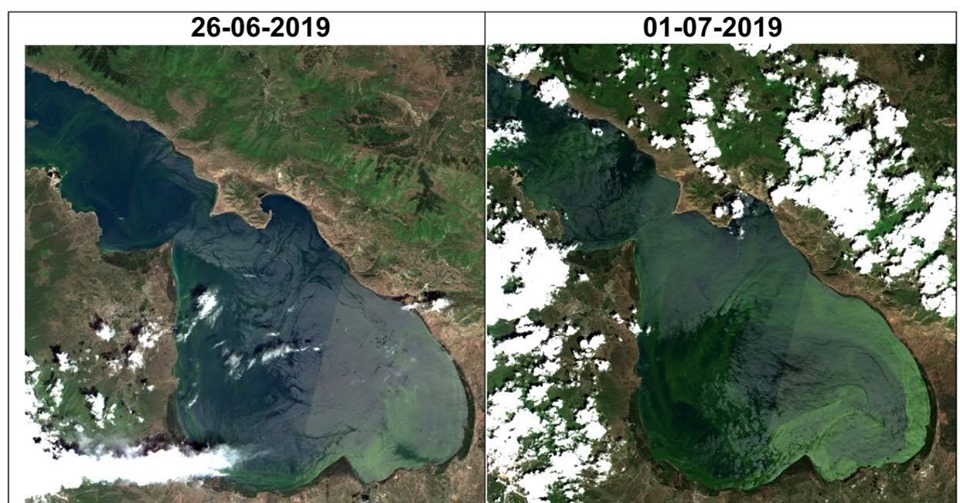 Armenia’s iconic Lake Sevan has turned an alarming shade of green in recent days, spurring a nationwide debate about how to save the country’s scenic jewel and major water source.

The algae bloom was first reported in late June, the latest recurrence of a problem that has existed since the 1960s. Heavy use of the lake’s water for irrigation has caused its level to drop, and overfishing and sewage dumped into the lake have further degraded the water quality.

But in the last several years, the problem has accelerated and many scientists fear that the lake may be on the verge of dying.

“We are still destroying Lake Sevan through our thoughtless actions,” environmentalist Karine Danielyan told a press conference on July 8.

Danielyan said that environmentalists had warned the government “months ago” about the dire situation around Sevan, but that they did not take action. “No one was interested,” she said. “We do not see a systematic strategy toward solving any problem in the country, especially ecological ones.”

The Ministry of Environment has been calling attention to the problem and claims to be working on a solution. On July 4 the ministry shared satellite photos on its Facebook page of a dramatic greening of the lake over just several days at the end of June. The ministry said it was trying to reduce the amount of water taken from the lake for irrigation, and that it was working with German scientists to study the problem. It noted that the European Union had given Armenia a five million Euro grant to address the problem.

While on a tour around the region, EU President Donald Tusk was in Yerevan on July 10 and visited Sevan along with Prime Minister Nikol Pashinyan.

Environment Minister Erik Grigoryan, speaking on July 4, said that the water would begin to clear up within 7-10 days. An RFE/RL dispatch from the lake on July 10 reported that the situation was “slowly” improving.

The head of the State Water Commission, Vardan Melkonyan, told reporters that the amount of water being taken out of the lake for irrigation has substantially declined: 29 million cubic meters so far this year, compared with 43.5 million cubic meters in the same period last year.

Grigoryan also said that global climate change was causing similar problems in other bodies of water, like the Black Sea and Russia's Lake Baikal. The government’s initiatives should cause the lake’s level to rise six meters, solving the problem, he said.

But many were critical of Grigoryan’s efforts. “If we don’t see a change in the Sevan issue in the next five days, the minister of environmental destruction should resign,” wrote activist Arman Gharibyan on his Facebook page.

A former head of Armenia’s environmental inspection body has alleged corruption around environmental management of the lake. Artur Grigoryan, who was hired by Pashinyan last June, said that he informed the prime minister in January about large-scale illegal fishing operations in Sevan, in a July 9 Facebook post. Grigoryan also posted photos of canned whitefish that he said were illegally fished from Sevan.

Grigoryan said the issue was discussed at a meeting of the government and that Pashinyan “angrily” demanded that regional authorities and police deal with the situation. But Grigoryan said that he was fired shortly thereafter, while Pashinyan was at the World Economic Forum in Davos, Switzerland. And the thorough inspections that were promised around Sevan never happened, he wrote.