Protestors expressed long-held resentment toward Sargsyan, who has led Armenia through a period of economic stagnation and high-level corruption. 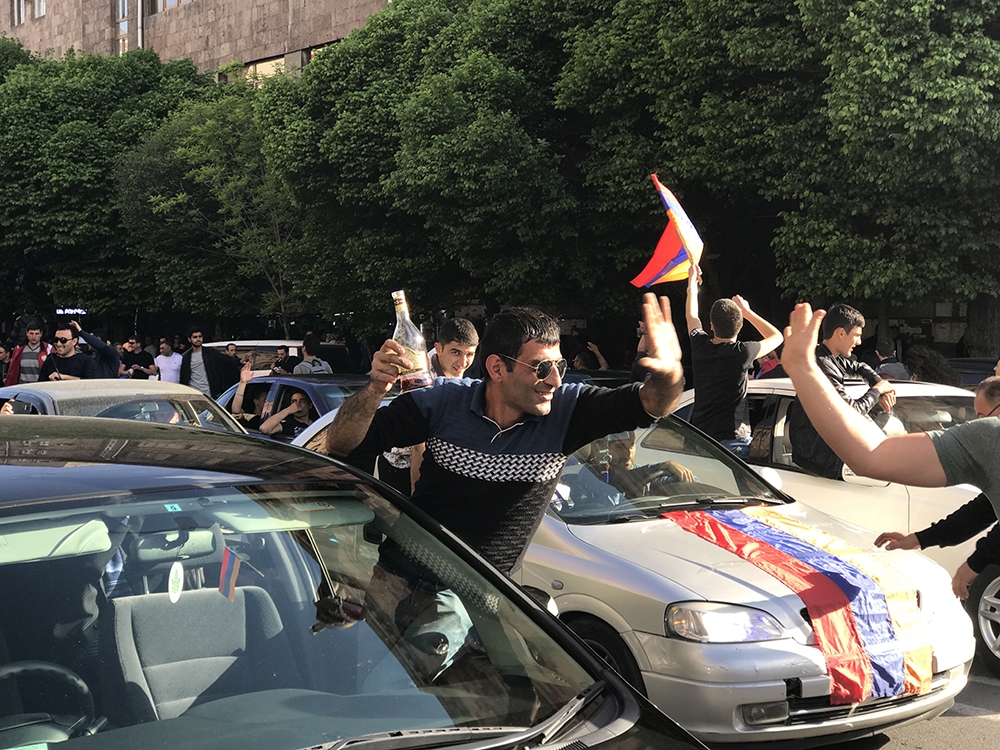 Revelers took to the streets of Yerevan after Armenian Prime Minister Serzh Sargsyan stepped down on April 23. (All photos by Joshua Kucera)

Armenia's longtime leader stepped down April 23, toppled by an overwhelming wave of peaceful, homegrown protests in what had been one of the post-Soviet world's most stagnant states. The move set off a wave of unprecedented celebration in the country and set the stage for what promises to be a dramatic, unpredictable political future.

“I am giving up the post of the country’s prime minister,” Serzh Sargsyan said in a statement. “The movement in the streets is against my tenure. I comply with your demand.”

He also gave credit to the leader of the protests, whose arrest the day before only gave more energy to the movement and made it appear unstoppable: “Nikol Pashinyan was right. I was mistaken. There are a number of solutions in the current situation, but I will not resort to any of them.”

The resignation was the culmination of 10 days of protests in Yerevan and elsewhere in Armenia aiming to force Sargsyan out. Protestors expressed long-held resentment toward Sargsyan, who has led Armenia through a period of economic stagnation and deep, high-level corruption. But they were catalyzed by Sargsyan's announcement two weeks before that he would take over the prime minister position as the country shifted from a presidential to a parliamentary one, thus offering the prospect of his continuing to rule indefinitely.

Armenia has seen a number of large street protest movements throughout the last several years, making most observers skeptical about the efficacy of yet another one. But this time the built-up resentment, combined with the political skills of Pashinyan, created a momentum that the government couldn't stop.

The stunning news of Sargsyan's resignation sent tens of thousands of revelers into the streets of Yerevan, streaming into Republic Square, the geographic center of the protest movement, in utter jubilation.

Groups broke into circle dances, shouted “Victory!” and “Armenia!” Men in track suits gave one another huge bear hugs; one group of civic-minded teenaged girls was even picking up empty plastic bottles on the street. Some just sat quietly in the square, satisfied by being surrounded with their joyous fellow citizens.

“It's like our nation is reborn,” said one of the celebrants, Sona Makasyan.

Asked what she thought awaited Armenia next, Makasyan jumped up and down. “It's gonna be great!” she said. “No, we know that there are struggles ahead, but this is the first step. It's a new Armenia.”

Many of the revelers went out of their way to thank police officers on the scene. Throughout the protests, many Armenians feared that a violent crackdown could be coming, and there were scattered cases of police arresting protesters violently.

But those episodes were forgiven, as the decisive crackdown never came. One twenty-something girl took off the red beret of one of the special police forces, put it on and posed for a selfie with him as he smiled bashfully.

“I hope that now everything is going to be done for the good of the people, that police will serve the people and not the leaders,” said another celebrant, Karen Muradyan.

One nearby red-bereted officer, Karen Hayapetyan, was accepting congratulations from passers-by. He laconically expressed hope that “it will all be better now,” but added that “we have always served the people.”

Sargsyan's resignation was only the last in a series of dramatic developments throughout the weekend. Earlier on Monday, Pashinyan was released from jail, a day after he had been arrested in what proved to be an ill-conceived attempt to behead the protest movement and disorient it. Protesters instead responded by coming out to a massive rally, with a crowd estimated at over 100,000 people.

Pashinyan was released shortly after a group of soldiers was seen, in their uniforms, marching with the protesters in Yerevan. Protesters had been looking for signs of defections from the government, and the sight of the soldiers heartened them. It may also have disheartened Sargsyan.

“First they offered me that Serzh Sargsyan would resign in October, then in two months, then on April 25,” Pashinyan told the crowd in Republic Square in the evening after his release. “I made my offer on behalf of all of you: Serzh Sargsyan must resign within two hours. And that is what happened"

Pashinyan called for a “people's candidate” to be elected as prime minister within a week, and then new elections as soon as possible.

The dramatic transition opened up a slew of fundamental questions about the country's political future, none of them immediately answerable. The government did announce that Sargsyan's replacement would be Karen Karapetyan, the former prime minister and now a deputy prime minister. It was unclear, however, whether the government saw that as a long-term arrangement or if he would just be a caretaker. Pashinyan said he is scheduled to meet Karapetyan on April 25.

The protesters in the streets were not represented by any significant political movement. Sargsyan's Republican Party and its allies control nearly all seats in parliament, the only exception being the Yelk Alliance, from which many of the protest leaders, including Pashinyan, came. But Yelk holds only nine of the 105 seats in parliament.

The Republicans' dominance of Armenian politics is due as much as anything to its ability to pressure Armenians, especially government workers, to vote for it, as well as to buy off their votes. One of Pashinyan’s demands has been new, free and fair elections, but it's not clear how that will happen.

The road ahead also is beset with geopolitical pitfalls. Armenia is highly dependent on Russia, and Sargsyan was a relatively loyal ally to the Kremlin. Yelk, meanwhile, has a pro-Western orientation and advocated for leaving the Russia-led Eurasian Economic Union. And Russia has long been fearful of popular revolutions in post-Soviet states.

But after Sargsyan resigned, Russian Foreign Ministry spokeswoman Maria Zakharova issued a surprisingly positive statement: “A people who can even in the most difficult moments in their history not break apart and maintain respect for one another, in spite of categorial disagreements, is a great people. Armenia, Russia is always with you!”

Geopolitics was all left for another day, however. In the evening, as Pashinyan spoke, the streets surrounding the square were filled with impromptu dance parties powered by car-stereo DJs.

“It's impossible to describe our situation now,” one reveler, Marina Muradyan, said. “It's just fantastic.”