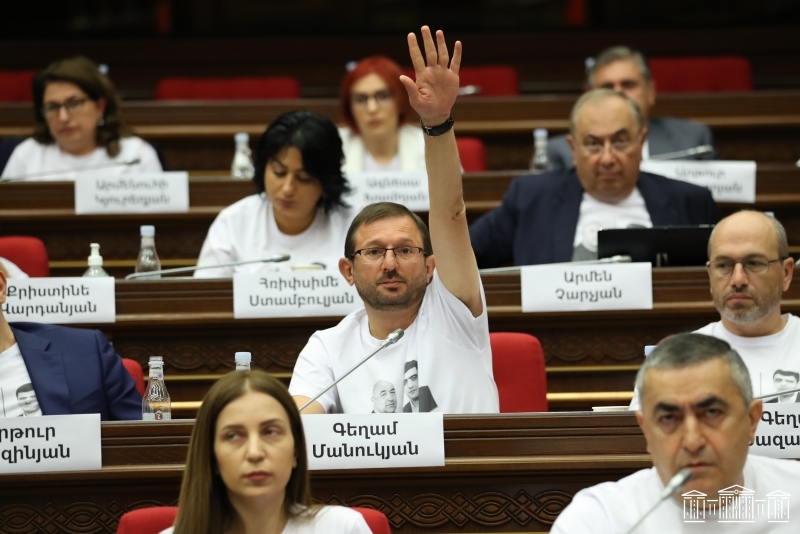 Opposition members of parliament at the body's first sitting on August 2. (photo: parliament.am)

Armenia today faces no shortage of pressing issues. But just over two weeks into its tenure, the country’s new parliament is showing little inclination to take them on, consumed as it is instead with bickering.

The parliament was seated on August 2 and, like the previous parliament, is dominated by allies of Prime Minister Nikol Pashinyan; his Civil Contract party has just under two-thirds of the seats in the body. But unlike the last parliament, elected at the end of 2018, the opposition this time is a radical one, unwilling from the outset to cede an inch to the ruling party.

Seyran Ohanyan, a former defense minister and now the head in parliament of the largest opposition bloc, the Armenia Alliance, described their role after losing the June elections in martial terms, as if the ruling party were the enemy: "When you don't complete the mission during combat but occupy positions, you have to hold and strengthen them to prepare for the next attack."

The tone was set on the first day of parliament, when members of the Armenia Alliance showed up to the session wearing T-shirts depicting the faces of several recently arrested opposition figures and the caption “political prisoners.” Those on the T-shirts were local officials from the tense Syunik province, on the border with Azerbaijan, and who the opposition argues were arrested for their resistance to Pashinyan. Two of them would have been representing the Armenia Alliance in parliament had they not been in jail. (Officially they have been charged with crimes including embezzlement and abuse of power.)

The Armenia Alliance members interrupted the beginning of the session demanding that the jailed officials be freed. “Our two colleagues, elected MPs, are behind bars, said Armen Rustamyan, an Armenia Alliance MP. “We can’t start this new parliament sitting overlooking the fact that the law is being violated – they have immunity,” he said. (Civil Contract officials have argued that parliamentary immunity does not apply to the would-be MPs given that their alleged crimes took place before the parliament was seated.)

“Is this a parliament or a circus? On the first day, the first session agenda is bickering,” wrote one Armenian on Facebook. “People, did you see the bastards you brought to parliament? The killers are talking all day about destroying Armenia,” wrote one another social media user, referring to the opposition.

Since then, the parliament has managed to elect a speaker, deputy speakers, and heads of committees – and do little else.

The highlight of its brief tenure so far has been a dispute over personal insults.

The source of the argument was a new law, passed by the outgoing parliament on July 30, criminalizing “grave insults” of government officials. That gave rise to questions over what constitutes a grave insult.

In the August 11 session of parliament Anna Mkrtchyan, an MP from the other opposition bloc, I Have Honor, used the phrase “capitulator Nikol” to describe the prime minister. Speaker Alen Simonyan then asked her to turn off her microphone, and the newly elected deputy speaker from the Armenia Alliance, Ishkhan Saghatelyan, came to Mkrtchyan’s defense arguing that terms like “land giver” or “capitulant” – epithets that have been widely applied to Pashinyan since the defeat in last year’s war with Azerbaijan – do not count as insults but as “political assessments.”

One MP from Civil Contract, Narek Grigoryan, shot back that such language was “unacceptable,” and the verbal melee began. The quarrel escalated when Speaker Simonyan, of Civil Contract, called in security and ordered the livestream broadcasting the session online to be cut off. Journalists covering the session in person also were ordered to leave the press box.

The episode kicked off a debate about the freedom of the press in covering parliament.

“I have always been and will remain an advocate for journalists, an advocate of freedom of speech,” another Civil Contract MP, Vladimir Vardanyan, told reporters after the session. “However,” he added, “I do not think it is the function of the media to cover a fight.”

The expulsion of the journalists drew a rebuke from the country’s ombudsman. Human rights advocate Nina Karapentyants said that journalists may have to appeal to international organizations. Journalists “can apply to human rights activists, to the Prosecutor's Office, to all the other relevant bodies. I am sure that this issue will not be resolved inside Armenia,” she told RFE/RL. “But there are international structures for that. The European Court of Human Rights, for example.”

The deeply hostile relations between the ruling party and the opposition are a significant change from the last parliament, when – at least at the beginning of its term – the two opposition forces were inclined to work with Pashinyan and his allies in the My Step bloc.

The conservative Prosperous Armenia party, led by oligarch Gagik Tsarukyan, played a key role in calling the early 2018 elections that brought My Step to power, and then his desire to maintain his many business interests kept him on Pashinyan’s side – for a while. The relationship ultimately soured, however.

Similarly, the other opposition force in the last parliament, the relatively liberal Bright Armenia, was initially seen as roughly equivalent to My Step, though it later sharpened its opposition as Pashinyan blamed the party for working with the former regime.

That parliament, however, was formed in the wake of Pashinyan’s overwhelmingly popular Velvet Revolution in the spring of 2018. This parliament, by contrast, is the result of snap elections called as a result of a political crisis following the country’s catastrophic defeat in the war and what many Armenians saw as Pashinyan’s ineffectual leadership in the conflict. And the two new opposition forces are both tied to former presidents, leaders of the regime that Pashinyan toppled in 2018, and longtime political enemies of the prime minister.

“The opposition is trying to take strong positions in parliament and is partially succeeding; there has likely never been such a large quantity of radical opposition forces in an Armenian parliament,” wrote analyst Hrant Mikaelian in an early analysis of the parliament’s work. “But the quality of that work is yet to be seen. At the same time, the ruling party is returning the blows, criticizing the opposition in the same way. The opposition still needs to learn to withstand these attacks, which are a bit of a novelty in Armenian political culture, and also to appropriately react to them, and in general to bring some sort of agenda to the parliament. Its own political future, and the future tendencies of Armenian politics, depend on it.”