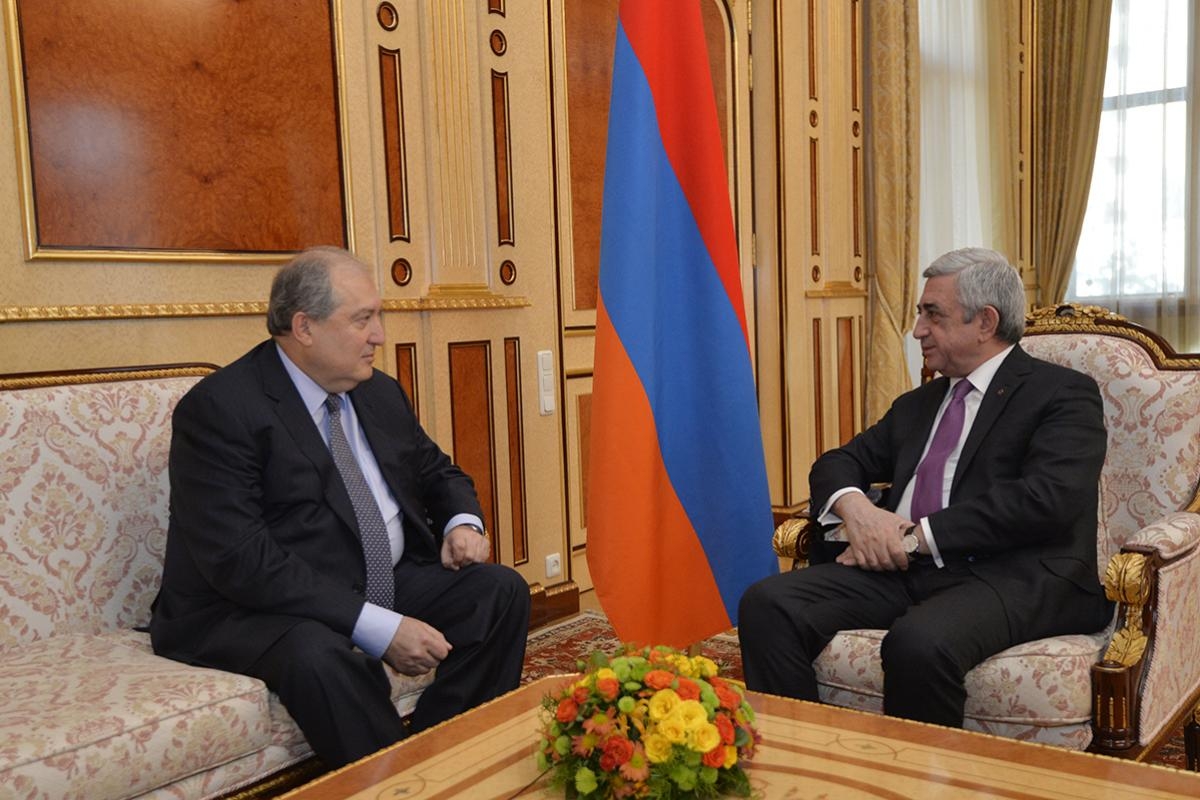 Armen Sargsyan (left), introduced January 19 as the candidate for president of the ruling Republican Party of Armenia, along with current President Serzh Sargsyan. (photo: president.am)

Investigations by Armenian opposition media have suggested that the ruling party's candidate for president may be ineligible for the office because of his British citizenship.

The Republican Party of Armenia nominated former prime minister, ambassador, and businessman Armen Sargsyan for the presidency. The party said that his selection was based on his knowledge of foreign languages, broad links with the Armenian diaspora, and international experience.

According to Armenia’s newly adopted constitution, a presidential candidate must have held only Armenian citizenship for the six years prior to his election. But an investigation by opposition news outlet Hetq on February 8 claims that Sargsyan falls short of this criteria.

“In fact, according to documents in the British Companies House registry on the Eurasia House International company, of which Sargsyan is listed as a director, his nationality is listed as British, and his country of residence, as the United Kingdom,” Hetq reported.

In a follow-up interview with Hetq, Sargsyan's spokesperson said the candidate was a dual citizen of both countries from 2002 to 2011, before renouncing his British citizenship, she claimed.

But the cited registry appears to refute this claim. In the company’s 2014 Annual Return, the last published before the company was dissolved the following year, Sarkissian is again listed as a British national.

Another opposition outlet, sut.am, published a similar report on the same day, analyzing the British State Register of Voters records from 2003 to 2012. Sarkissian was registered in the SWP1 postal area in London with his wife and two sons.

Sargsyan, in an interview with RFE/RL, refutes the allegations.

“You are looking for problems where there are none,” he said. “Yes, I was a British citizen. After I was released from the post of ambassador [to the UK] in 2000, I applied for British citizenship, which I obtained in 2002. But I renounced my citizenship in 2011.”

Sargsyan maintains that he is a director for dozens of companies and appears as British in some, and an Armenian in others.

“If you look at Davos, you can find that I’m still listed as a British citizen. Do you think if someone in Britain renounces their citizenship their name is removed from everywhere?” he asked.

The businessman and former diplomat says he took British citizenship for the travel benefits it brings.

This year’s political cycle is particularly lively, as the country prepares its transition from a presidential form of governance to a parliamentary model. The role of president will thus change into that of a national figurehead, with prime minister becoming the more powerful position.

The president will be elected by the parliament on March 2 and, despite the charges, Sargsyan's road to the presidency is unlikely to be derailed. The only political force in parliament opposing him is the small Yelk bloc, and the country's courts are unlikely to entertain a challenge based on the constitution. “The judicial system in Armenia lacks independence and autonomy from the executive,” the American human rights group Freedom House said in its most recent Nations in Transit report.