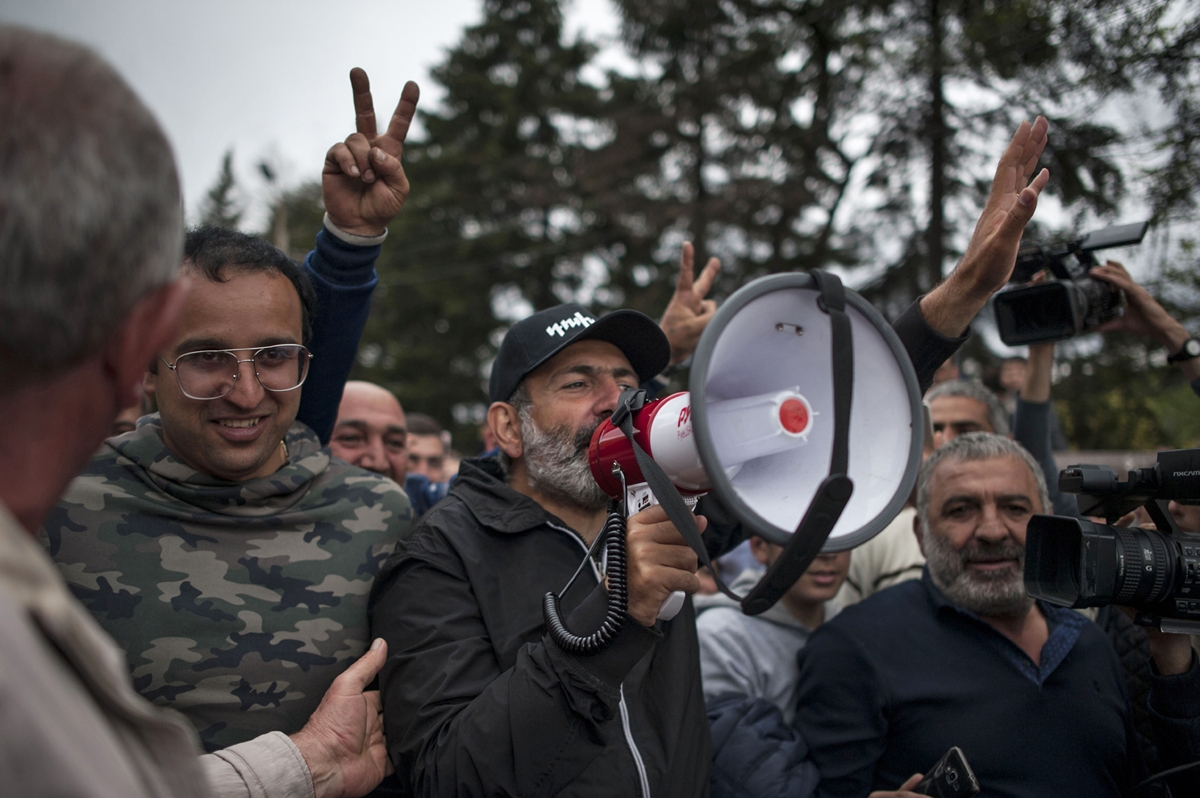 After being rejected by parliament, opposition leader Nikol Pashinyan, seen here in northern Armenia over the weekend, called for an immediate resumption of the civil disobedience campaign.  (Nazik Armenakyan/4Plus)

After eight hours of tense, often testy debate, members of parliament voted on May 1 by a 55-45 margin to reject Pashinyan's candidacy, setting the stage for another vote in seven days and for street protests to resume.

The ruling Republican Party did not run a candidate for the post, and they have not made clear what their strategy will be for maintaining power. But during the public discussion they portrayed Pashinyan as an untested leader too risky to steer Armenia through its many security challenges. And they promised that they had heard the voices of the hundreds of thousands of Armenians who protested their rule and that they would do more to improve living conditions.

“We have accepted the victory of the people's movement in Armenia, we agree with their criticisms, and we will move in the direction of resolving them,” said Vahram Bagdasaryan, the head of the Republicans' faction in parliament. But electing Pashinyan, he said, would expose Armenia to “fatal danger.”

The vote was a rare episode of high political drama in Armenia, pitting the wave of popular support that thrust Pashinyan into the role of opposition leader against the parliament, where the ruling Republicans still hold a majority of seats. Their prime minister, Serzh Sargsyan, resigned on April 23 after mass protests had targeted the veteran leader for 10 days.

Pashinyan's bloc in parliament held only nine of 105 seats, but ahead of the session he was able to secure the votes of all other parties except the Republicans, including the latter's coalition partner, ARF Dashnaktsutyun, and the systemic opposition Prosperous Armenia. Pashinyan's allies were confident that the overwhelming public rejection of Republican Party rule would allow them to peel off the six Republicans they would need to elect him.

But the night before the vote, the head of the Republicans' faction in parliament, Eduard Sharmazanov, said that their MPs would wait until hearing Pashinyan's proposals before deciding how they would vote, and implied that they would be making a unified decision.

In a 2 a.m. video posted to Facebook, Pashinyan warned his supporters that the Republicans would attempt to “disrupt” the vote and called on his supporters again to take to the streets to prevent that from happening.

When he took the rostrum to present his candidacy on May 1, Pashinyan expanded on that, saying that Sargsyan had threatened Republicans against voting for him. “The leadership of the Republican Party, headed by Serzh Sargsyan, continues to toy with their own people and still have not declared whether they will vote for the people's candidate, even though they understand that it is the only way to overcome the current crisis and to put Armenia on the path to sustainable development,” he said. “We have created every possibility for the dignified exit of Serzh Sargsyan and the Republican leadership. But it seems that these people, having held their people in chains for years, take this sort of behavior as weakness.”

In the ensuing question-and-answer session, several Republican MPs tried to sow doubts about Pashinyan's dedication to Armenia's relationship with Russia and to his ability to be a tough negotiator with archrival Azerbaijan.

Some Republican MPs brought up previous statements where Pashinyan had expressed support for returning some territories that Armenia occupies as a security buffer around Nagorno-Karabakh, trying to paint him as soft on Azerbaijan.

Others contrasted Pashinyan's past skepticism about Russia's role in Armenia with his more recent assurances that he intends to maintain the strong alliance with the Kremlin.

“On the one hand, Mr Pashinyan says we have to take into account the reality that Russia is a strategic ally of Armenia,” said one Republican MP, Mihran Hakobyan. “On the other hand, at his street rallies, we have marginal anti-Russian political figures making speeches. Which reality should we trust?”

Still other MPs presented blunter justifications for blocking Pashinyan's rise. “We are the ruling party – we have to disrupt the opposition's attempt to take power,” said Sedrak Saroyan.

And Republicans repeatedly invoked a law-and-order image, arguing that the protesters represented a narrow slice of naive youth, while a silent majority supported them.

Pashinyan and his allies forcefully fought back. “You are the reason people came out to the streets,” said Sasun Mikaelyan, an MP from Pashinyan's Yelk bloc. “Young people are fighting because they hate you.”

Immediately after, Pashinyan went to Republic Square, on the opposite end of central Yerevan, where he joined supporters who had been watching the televised events all day. He called for an immediate resumption of the civil disobedience campaign that characterized the earlier protest movement.

Under the rules of the constitution, the parliament will hold another vote on May 8, and if no candidate is chosen at that session, the country will have to hold new parliamentary elections.

“It looks like the Republicans are trying to win time,” Mikayel Zolyan, a political analyst with the Yerevan think tank Regional Studies Center, told Eurasianet. He also suggested that they could be maneuvering to bring back Robert Kocharyan, Sargsyan’s predecessor as president, as a potential prime minister candidate. And, “in the most cynical scenario,” they could be hoping to provoke violence to create a pretext for invoking a state of emergency, Zolyan said.