The elections were a unique event in post-Soviet Armenian history, as the results were not a foregone conclusion. The incumbent won an unexpectedly large mandate to stay in power. 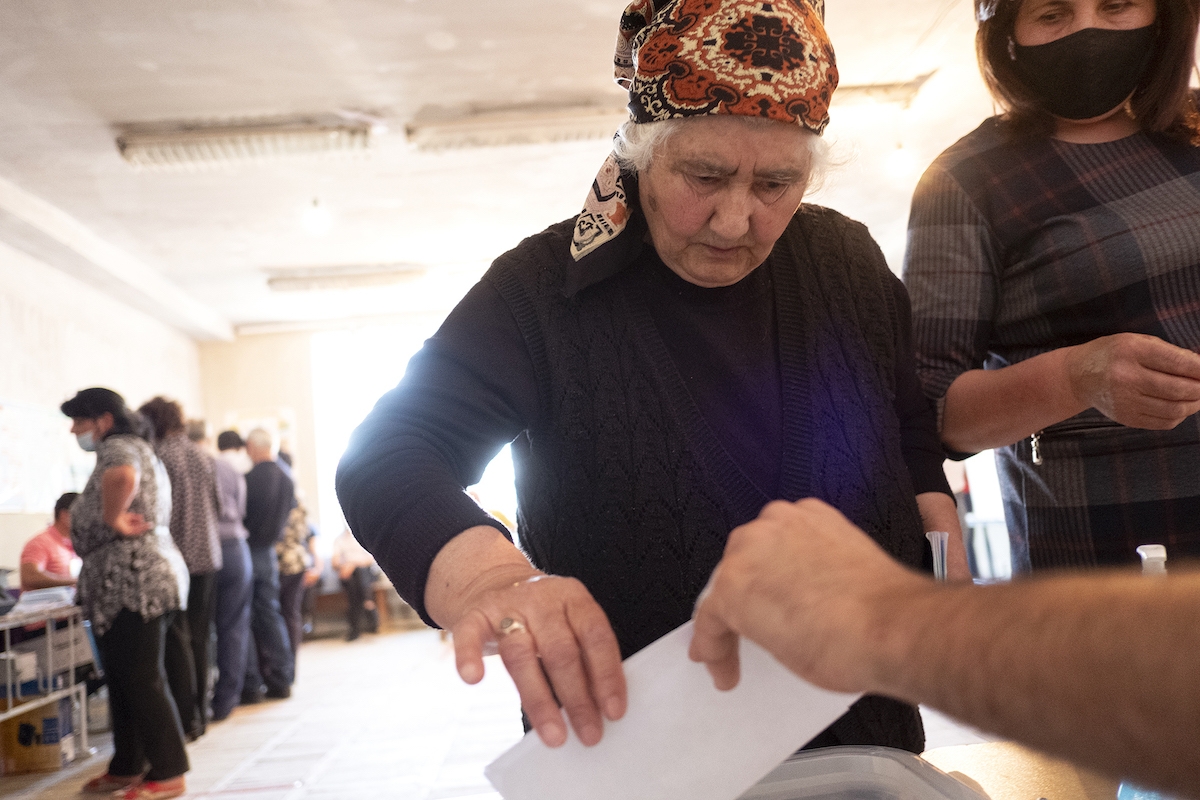 A voter casts her ballot in the village of Tsovrzard. (photo: Winslow Martin)

Armenian Prime Minister Nikol Pashinyan has won reelection in a landslide, gaining a renewed mandate despite leading the country to a disastrous defeat in last year’s war with Azerbaijan.

Pashinyan’s Civil Contract party won just under 54 percent of the vote in the June 20 election. The “Armenia” alliance led by former president Robert Kocharyan was a distant second at just under 21 percent.

According to an analysis of the results by elections expert Harout Manougian, Civil Contract was slated to get 71 seats in parliament, Armenia 29, and the I Have Honor bloc seven seats. That would allow Civil Contract to maintain the decisive two-thirds majority it currently enjoys in parliament (along with other partners in a bloc called My Step, though that bloc is being disbanded for the next parliament).

The result was a far more decisive win than any public polls had predicted, though it did track with Civil Contract’s own internal projections. Pashinyan won in every region of the country, even the far southern district of Syunik, where the government was thought to be especially vulnerable due to security concerns that have proliferated there.

Even in Shurnukh, the newly divided Syunik village that has exemplified that instability – part of it fell under control of Azerbaijan as a result of the war – Pashinyan won 51-40 over Kocharyan.

Immediately after the first preliminary results came out past midnight, Pashinyan announced a victory rally for the evening of June 21 in Yerevan, where he promised a “solemn ceremony of handing over the steel mandate to the newly elected Prime Minister.” That was a reference to a campaign trope in which Pashinyan, who came to power in 2018 protests that became known as the “Velvet Revolution,” said he would be taking a harder line in a new administration. He called on voters to “replace our velvet mandate with a steel one.”

But the victory was likely less a strong mandate for Pashinyan than a repudiation of his would-be replacements, dominated by figures from the widely hated former regime. Ahead of the vote Kocharyan emerged as Pashinyan’s strongest challenger, as his air of competence contrasted favorably with the prime minister’s erratic behavior and perceived incompetence dealing with the country’s many post-war challenges. But the former president remained deeply unpopular among Armenians who remembered his corrupt and authoritarian rule from 1998-2008.

For many in heavily polarized Armenia, the vote represented less a choice of their candidate than a rejection of the one they feared more.

“I voted for Pashinyan even though I have no hopes for him. I just don’t want Kocharyan to come back,” said 30-something Maria Yegiazaryan, as she voted at a polling station on the outskirts of Yerevan. “I was so nervous to not damage my ballot paper when I put it inside the envelope, it was like I was taking a big exam back in university,” she told Eurasianet.

“Pashinyan isn’t the one that we need, but the other one is a step backwards,” said another voter, 60-something Samvel Poghosyan, who cast his ballot at the House of Culture in the village of Oshakan in Aragatsotn province.

Despite the high stakes of these elections, turnout was only 49 percent, virtually the same as it was in the last parliamentary elections when the outcome was a foregone conclusion.

An election monitoring mission from the OSCE gave a largely positive assessment of the vote, calling them “competitive and generally well-managed” in its preliminary post-election report. Its observers found “very few significant procedural errors or serious violations,” though it did note that the election was “characterized by intense polarization and marred by increasingly inflammatory rhetoric among key contestants.”

The Armenia alliance claimed that it had observed a large number of violations in favor of Civil Contract, and said that it did not accept the results. The big numbers for Pashinyan contradict “the results of polls, including international polls, as well as common sense,” the alliance said in a statement issued to local media as results were coming in. It did not give further indications about its next steps.

Kocharyan did not make any public comments as of late afternoon June 21, but speculation mounted that the Armenia and I Have Honor alliances may refuse to take up their mandates in parliament. At a press conference, journalists asked the head of the Central Election Commission what would happen if the opposition parties refused to take their seats. He suggested it would be uncharted territory: "At this stage, we do not have a specified institution of renouncing the mandates,” he said.

But Manougian, the election expert, suggested that parliament could function normally with only Civil Contract MPs showing up, and that a similar situation prevailed for much of the post-war period, when the opposition parties often refused to attend sessions.

On election day, many Pashinyan critics appeared unwilling to go public with their vote and suggested a fear of intimidation by the authorities.

“Pashinyan is a psychopath, incompetent, little man who gave 70 percent of our country away,” said one pensioner in Yerevan, referring to the loss in the war of formerly Armenian-controlled territory in and around Nagorno-Karabakh. “He shouldn’t be allowed to continue to breathe but you will see how many votes he will get.” He asked not to be identified: “I don’t want to give my name, because I voted for Kocharyan.”

“People don’t trust the current government, our borders aren’t secure,” said Liliana Grigoryan, a Russian teacher in Oshakan who declined to say who she voted for. “We came to vote but we don’t know if it will get any better.”

This piece has been updated to include updated results and comments from the Central Election Commission and the OSCE.