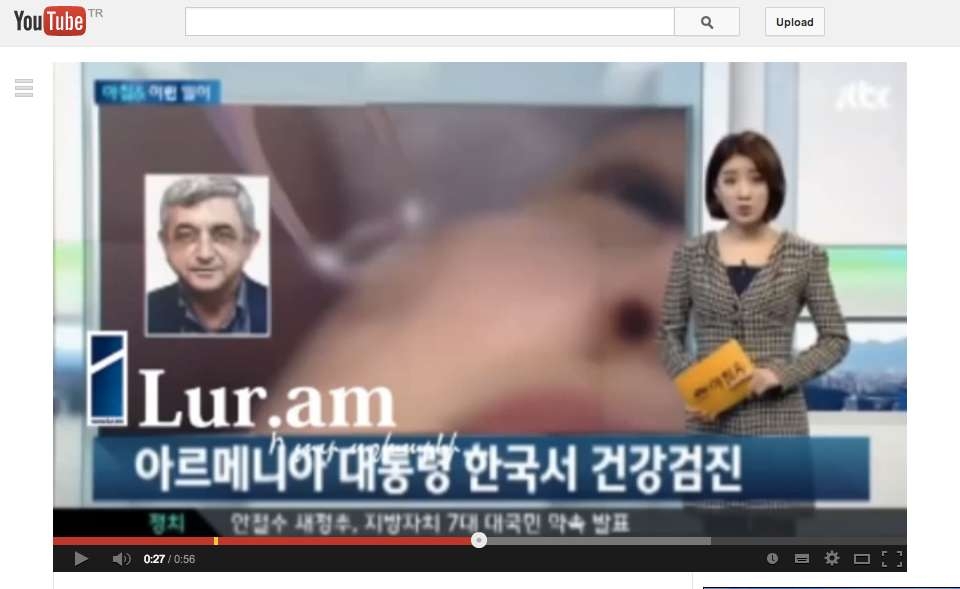 South Korean media proudly made President Serzh Sargsyan into the poster-boy for the country's health-tourism sector, as shown in this footage posted by Ilur.am.

To make it through a frigid winter, the Armenian government recently advised citizens to economize. But that advice apparently does not extend to Armenian President Serzh Sargsyan and a few pals, who, according to the national South Korean news outlet Chosun Ibo, spent a week in mid-January undergoing a 200-million-wong ($184,391) "rejuvenation treatment" at the Chaum spa in Seoul's fashionable Gangnam district.

The Armenian president is better known as a military man than as an appearance-conscious metrosexual, but apparently he decided that his looks do require maintenance. Chosun.com claims that Sargsyan, accompanied by the unidentified "ex-president of a former Soviet satellite nation" and "a Russian-Armenian oligarch," went the whole hog during his stay -- stem cell therapy, spa and anti-aging therapy, also a body scrub and massage.

At first glance, you might assume that the oligarch -- identified by RFE/RL's Armenian service, based on a published photo, as Ara Abrahamian, president of the Union of Armenians of Russia --  picked up the tab. Sargsyan's monthly salary is 400,000 drams, or $979. But presidential spokesperson Arman Sagatelian claims that isn't the case. He asserted to  Epress.am that the cited 200-million-wong price tag was the overall price for the
services used on Sargsyan's party, and that the president paid for
his own treatment. The true grand total was "many times less" than what was
reported, Sagatelian added. How much Armenian taxpayers had to fork out for this little pick-me-up is unclear.Costs aside, there's also the question of health. After the news broke, RFE/RL's Armenian service inquired whether or not Sargsyan, who, according to his press office, had left on January 7 for "a short vacation . . . abroad," was feeling quite himself. Eduard Sharmazanov,  spokesperson for the Republican Party of Armenia, which Sargsyan heads, angrily retorted that the president is in perfect health and that those who doubt this should get a check-up themselves.

That said, Sargsyan could have been just following the example of his closest ally, Russian President Vladimir Putin, who has long been rumored to favor Botox. Last year, Sargsyan caused a fury by choosing to align his country with Russia's Customs Union, a pet Putin project. Who knows . . . maybe the trade-club practices face control.