For the region's would-be Westernizers, riding a bike is more than a way to get from one place to another – it's a symbol of progress. 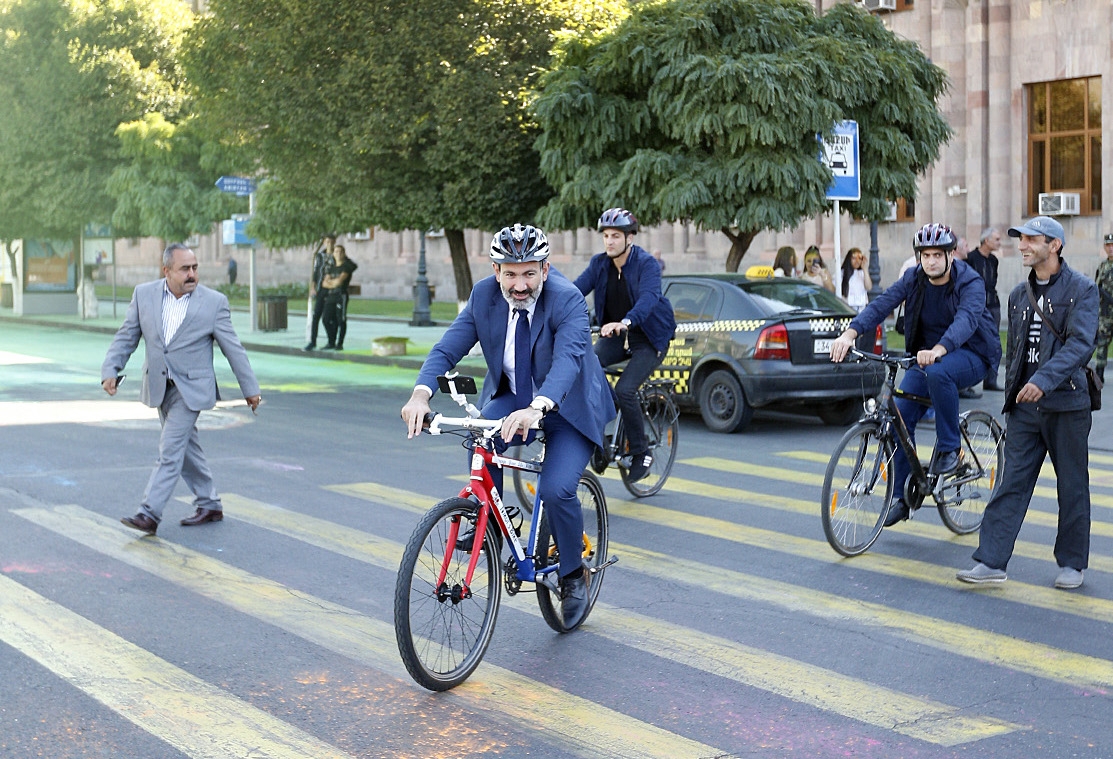 Armenian Prime Minister Nikol Pashinyan rides a bicycle in Yerevan. The event was interpreted as either a symbol of progressivism or a cheap PR stunt. (Photo: Prime Minister's office)

In the post-Soviet neck of the woods, a convoy of black cars remains the preferred mode of ground transportation for prime ministers. The region's cutthroat roads make little accommodation for bicyclists, often leaving human-powered transport only for the fashion-forward or suicidal.

And so Armenian’s Prime Minister Nikol Pashinyan’s joyride through the streets of capital city became the talk of Yerevan. The ride was welcomed as yet another revolutionary move by the leader brought to power this spring by a popular uprising against the old political elite and their old ways.

“I’m going live today to do my share in promoting a healthy lifestyle,” Pashinyan wrote September 30 on his Facebook page. He announced that he had been gifted a bicycle emblazoned with the slogans of the spring revolution and that he was going to ride it.

Later that day, Pashinyan indeed appeared astride said bicycle in the streets of Yerevan, dispatching live updates over Facebook on how the ride was working out for him. Later in the day, he again rode the bike to the opening of a business center in Yerevan, stopping en route for a chat with participants of a marathon. In total, he posted no fewer than seven Facebook updates about his cycling adventures.

“I don’t regard it as my personal bike,” Pashinyan wrote later. “It is the first official state bicycle of the Prime Minister of the Republic of Armenia. I sure hope it is armored,” he quipped.

Many Armenians heaped praise on Pashinyan for promoting healthy lifestyles and for breaking the mold on yet another front in the country that he has promised to wrest out of its post-Soviet stasis. To many, the ride was testimony to the fact that much-desired change is happening, but others sniffed at what they saw as a transparent PR stunt. “Cheap show and populism[, meant as] distraction from the real issues,” tweeted one unimpressed Armenian.

That divide neatly summarized the divergent views about the leader that Armenia acquired this spring: Is he a true democrat and reformer, or is he all about populism and spectacle?

The bike ride did help Pashinyan telegraph an image of the man of the people and reformer. When it turned out that he crossed through a memorial area where cycling is forbidden, Pashinyan turned it into a slogan. “I hereby forbid the forbidders to forbid,” he said.

But riding a bike is not necessarily a sign of democratization. In Azerbaijan, Armenian’s next-door sworn enemy, social media users were quick to post photos of their autocratic leader, President Ilham Aliyev trying out a locally produced bike in 2016. “B—ch, please!” tweeted one Azerbaijani man, attaching a photo of a cycling Aliyev.

The closest parallel, however, is probably to another of Armenia’s neighbors, Georgia, where former president Mikheil Saakashvili, a reformer and revolutionary like Pashinyan, used to barrel around on a bike. Similarly brought to power through a popular uprising, Saakashvili once said that “reforms are like a bicycle – when you hit the brakes, you will immediately fall over.”

Saakashvili did fall over – both literally and figuratively. He once broke an arm in a bike accident in Turkey and the accident was purportedly caught by a CCTV camera. Now he is cycling in exile in the Netherlands and Georgia is left to debate his mixed legacy.

If the parallels to Saakashvili hold, Armenians can soon expect to see Pashinyan in front of cameras driving a tractor, skiing and swimming.