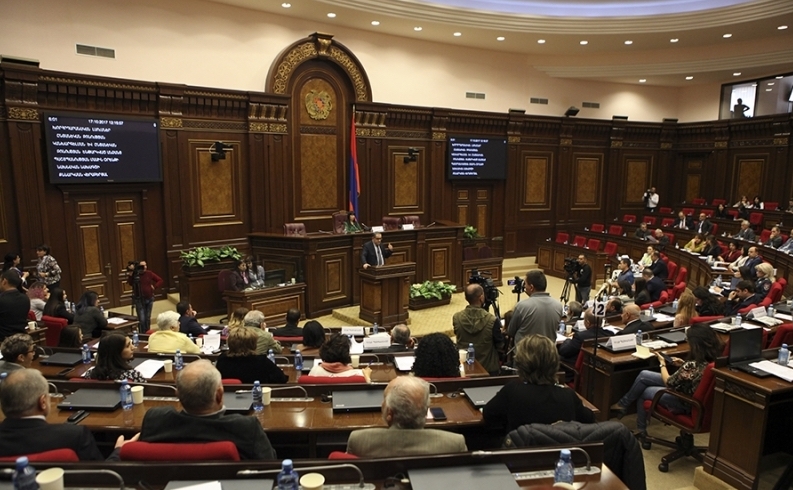 An October 17 hearing, organized by the Armenian parliament's Standing Committee on European Integration, on domestic violence legislation. Armenia's ruling party has expressed criticism of the bill, which has been backed by the European Union. (photo: parliament.am)

Armenia's ruling party has criticized a draft bill aimed at preventing domestic violence, and the government has said it will amend the legislation to address the concerns. But observers say the bill -- which has become a lighting rod for clashing values and geopolitical wrangling in Armenia -- is still likely to pass, if in a weakened form.

Eduard Sharmazanov, the deputy speaker of parliament and spokesman for the ruling Republican Party of Armenia, told media on November 1 that he has a number of problems with the legislation. For one, he argued that the provisions for “psychological violence” and “economic violence” are ill-defined.

He also suggested that the bill contravened biblical teachings about the role of women vis-a-vis men.

Justice Minister Davit Harutiunian, one of the main advocates for the bill, said that the bill would be amended to take those concerns into account, but also "made clear that the amendments will not be significant," RFE/RL reported.

The bill has been years in the making and is part of a deal that the Armenian government made with the European Union, under which the EU will pay Armenia if it carried out a number of democratic reforms. Opponents of the bill argue that it is an attempt to impose foreign, liberal values on Armenia's traditional society.

Given that the bill was drafted by the Republican Party-controlled government, Sharmazanov's protestations looked a bit like a charade aimed at conservative Armenians. "This law will be adopted sooner or later," Alexander Iskandaryan, a Yerevan-based analyst, told EurasiaNet.org. "This does not imply that politicians won't make populist speeches abut it - they will, because 'traditional values' sell well in Armenia. Of course, the law might be amended but in all likelihood, not considerably."

Advocates criticized the government for watering down the bill. “The bill itself is based on a significant compromise," said Zara Hovhannisyan, coordinator of the Coalition Against Violence on Women, in an interview with news site lragir.am. "The bill is weak in terms of resources. Further weakening means that the law loses its impact, purpose and importance."

About 60 percent of Armenian women reported that they had suffered from domestic violence at least once in their lives, according to a 2011 survey conducted by the Organization for Security and Cooperation in Europe. In the last seven years, 30 women were murdered in cases of domestic violence, according to the advocacy group Coalition Against Domestic Violence.