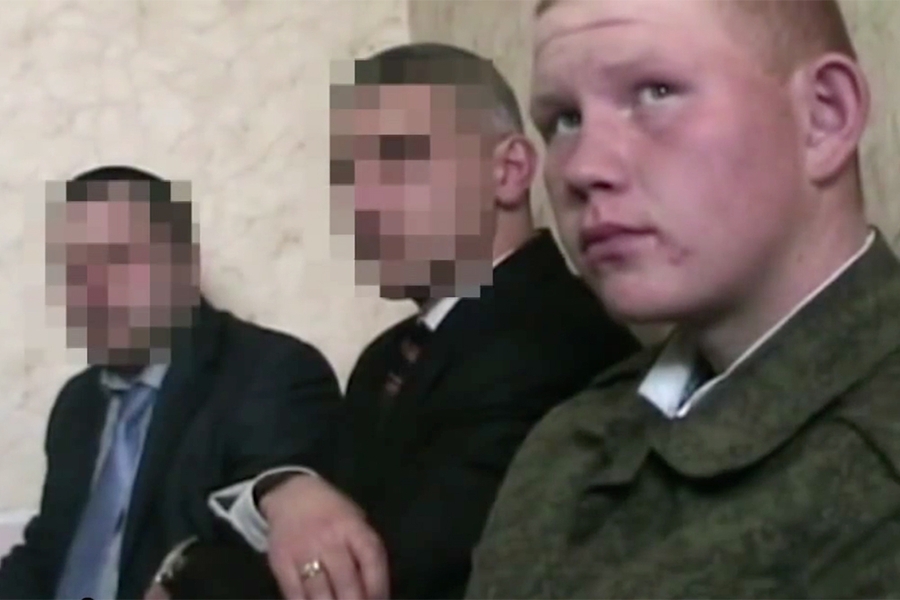 Russian conscript Valery Permyakov, who was serving on Russia’s army base near Gyumri, stands accused of murdering seven members of a local family on Jan. 12, 2015. (Video Frame Grab)

With a high-profile trial in Armenia set to resume in which a Russian soldier stands accused of murdering a family of seven, observers wonder whether the loose ends connected to the case will ever be wrapped up. Russia is not eager to see light shined on systemic flaws within its military structure.

The defendant in the trial, scheduled to continue February 5, is an 18-year-old Russian army private, Valery Permyakov, who had deserted Russia’s 102nd army base in the Armenian city of Gyumri. Permyakov has confessed to killing seven members of the Avetisian family in their home in early morning hours of January 12, 2015. Nevertheless, lots of questions about the circumstances and timeline remain unclear.

The murder investigation, initially conducted only by Russian officials, severely strained ties between Yerevan and the Kremlin. Amid protests over a Russian energy company’s price hike last year, Moscow agreed to share the investigation, and for an Armenian judge to preside over the case. Permyakov’s trial, which started last December, is being held on Russia’s Gyumri base.

The presiding judge, Haroutiun Movsisian, has rejected a petition from the Avetisian family for the trial, which is open to media, to be moved to a civilian Armenian court. Armenian police, though, have replaced Russian soldiers guarding Permyakov in court, the ArmeniaNow news agency reported last month.

The case continues to generate resentment of Russia among the Armenian public. Lusine Sahakian, one of five lawyers representing relatives of the deceased, contends that the Russian military officials who made the decision to deploy Permyakov to Armenia should be considered complicit in the murders because they knew the defendant to be unstable.

Sahakian cited official evidence that, before arriving in Armenia in December 2014, Permyakov had deserted eight times while serving in Russia, and once had broken a chair over an officer’s head. After one desertion attempt, he spent time in a Russian military psychiatric clinic, she said.

“Nevertheless, he was brought to Armenia and given a weapon,” said Sahakian. “Therefore, in this story, to start with, those who brought him here are guilty.”

The trial is also raising questions about the Russian military’s ability to provide adequate food and care for its soldiers, as well as military discipline. In the wake of the murders, local concerns about Russian soldiers who beg for food have persisted. Over the last year, Gyumri police reportedly increased security at high-traffic public spaces, but no mention has been made of an attempt to address the issue of Russian servicemen scavenging for food.

On February 1, one family summoned police when a drunken Russian soldier allegedly tried to break their door down, Armenian media outlets reported.

The issue of scavenging has come up in the Permyakov case. Initially, investigators claimed that Permyakov had entered the Avetisians’ house to seek a drink of water, but on the witness stand, he said that he had entered the house to change out of his uniform while on the run.

The motive for the murders has not been conclusively determined. When interviewed by a psychologist, Sahakian alleged, Permyakov initially expressed no remorse for his alleged actions, but then remarked “How could I do it? I like children a lot. Children are flowers.”

“Definitely, he [Permyakov] has problems, and the Russian side does not want to voice them,” Sahakian said.

Among the unanswered questions surrounding the case is why none of the Avetisians’ neighbors heard any noise from the early-morning slaughter? Permyakov supposedly did not use a silencer on his rifle.

On January 29, a neighbor and relative of the Avetisians testified that she had heard a “loud noise,” which she had thought was an earthquake, on the morning of the murder. Karine Avetisian claimed that she then heard the six-month-old Avetisian baby, Seryyhoza, crying, but, fearing the darkness outside, she went back inside her house, and only learned of the family’s murder the next day.

The lingering uncertainty surrounding the murders prompts human-rights activist Artur Sakunts, director of the Vanadzor office of the Helsinki Citizens’ Assembly, to criticize the Armenian government’s handling of the tragedy. Russian authorities, he claimed, “did not have the right” to investigate the murder on their own. It is also improper that the defendant remains in the custody of the Russian military, and not the Armenian justice system, and that the trial is taking place on the military base, “under the complete control of the Russian side,” he said.

Hovhanes Sahakian, the head of parliament’s Standing Committee on State and Legal Affairs, rebuffed Sakunts’ criticism. “For us, the most important thing is that the scoundrel receives his punishment,” he said. “Let’s rise above all this talk and speculation and aim for one common goal — a fight for justice and for the criminal’s punishment.

Last August, a Russian military court sentenced Permyakov to 10 years in prison for desertion and illegal possession of a weapon.

Family lawyer Sahakian said that “it’s too early to speak of what results we will have” in Permyakov’s murder trial, but expressed hope that “if during one year we received answers to many questions [about Permyakov], we hope that we will receive the rest as well.”