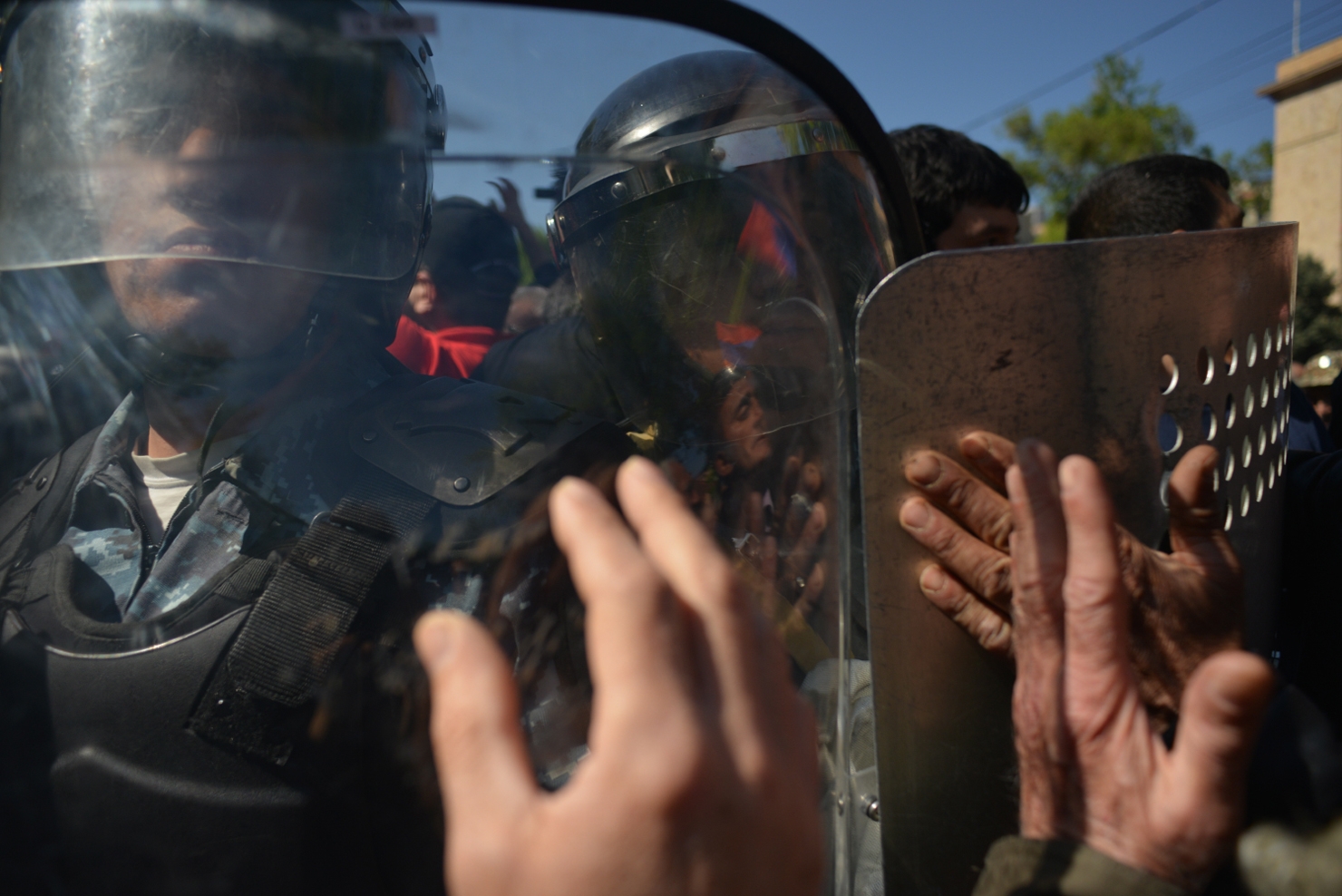 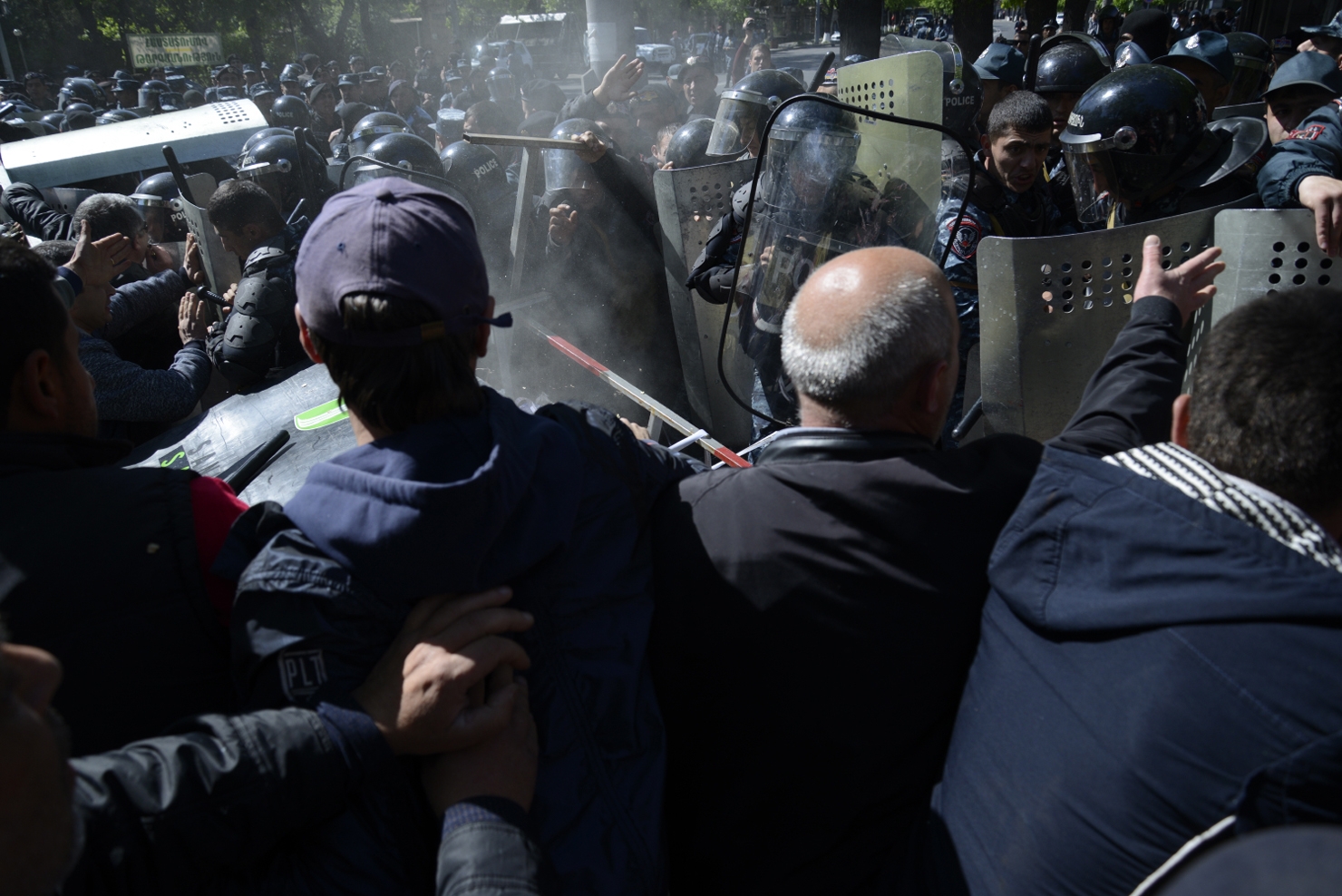 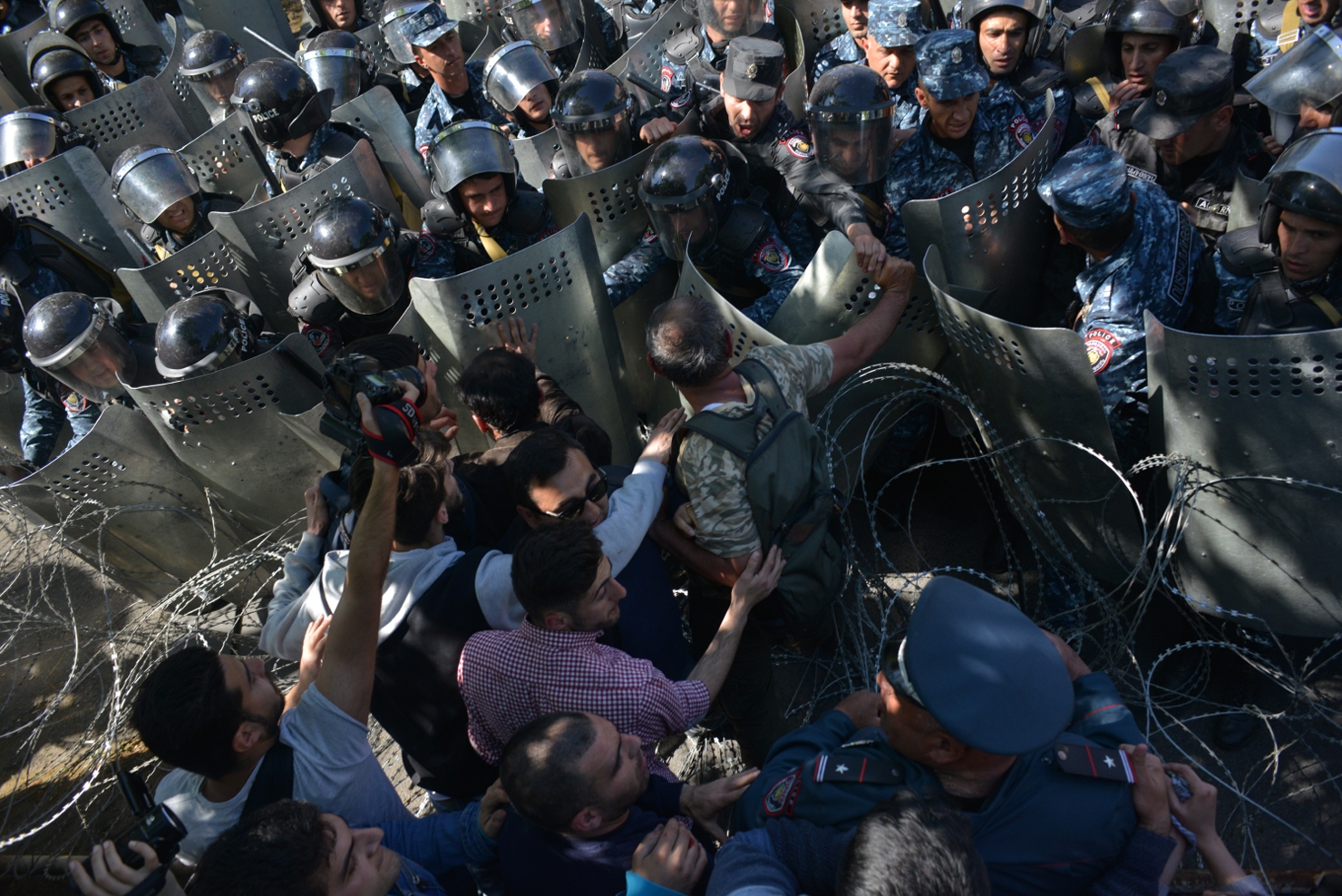 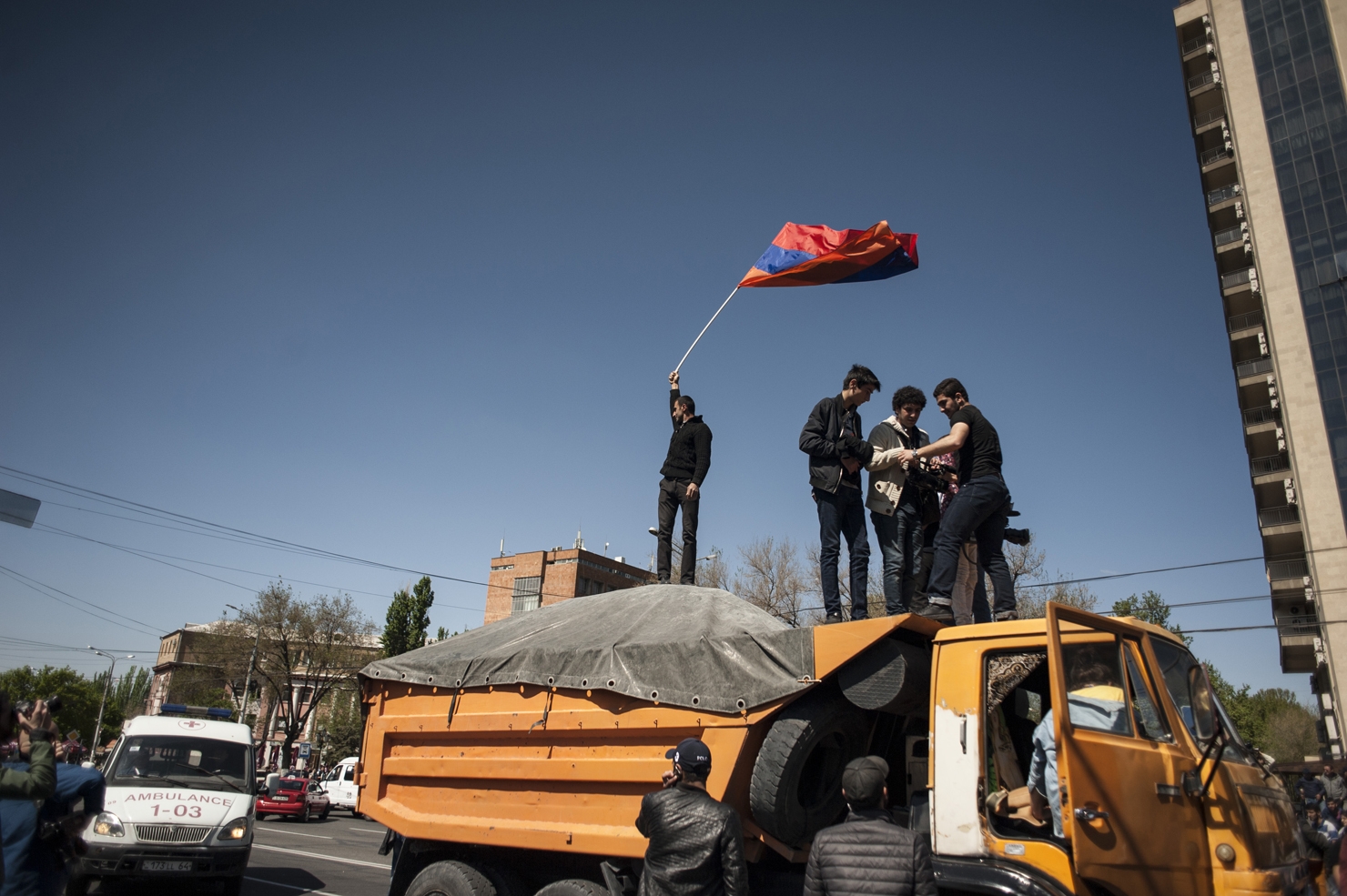 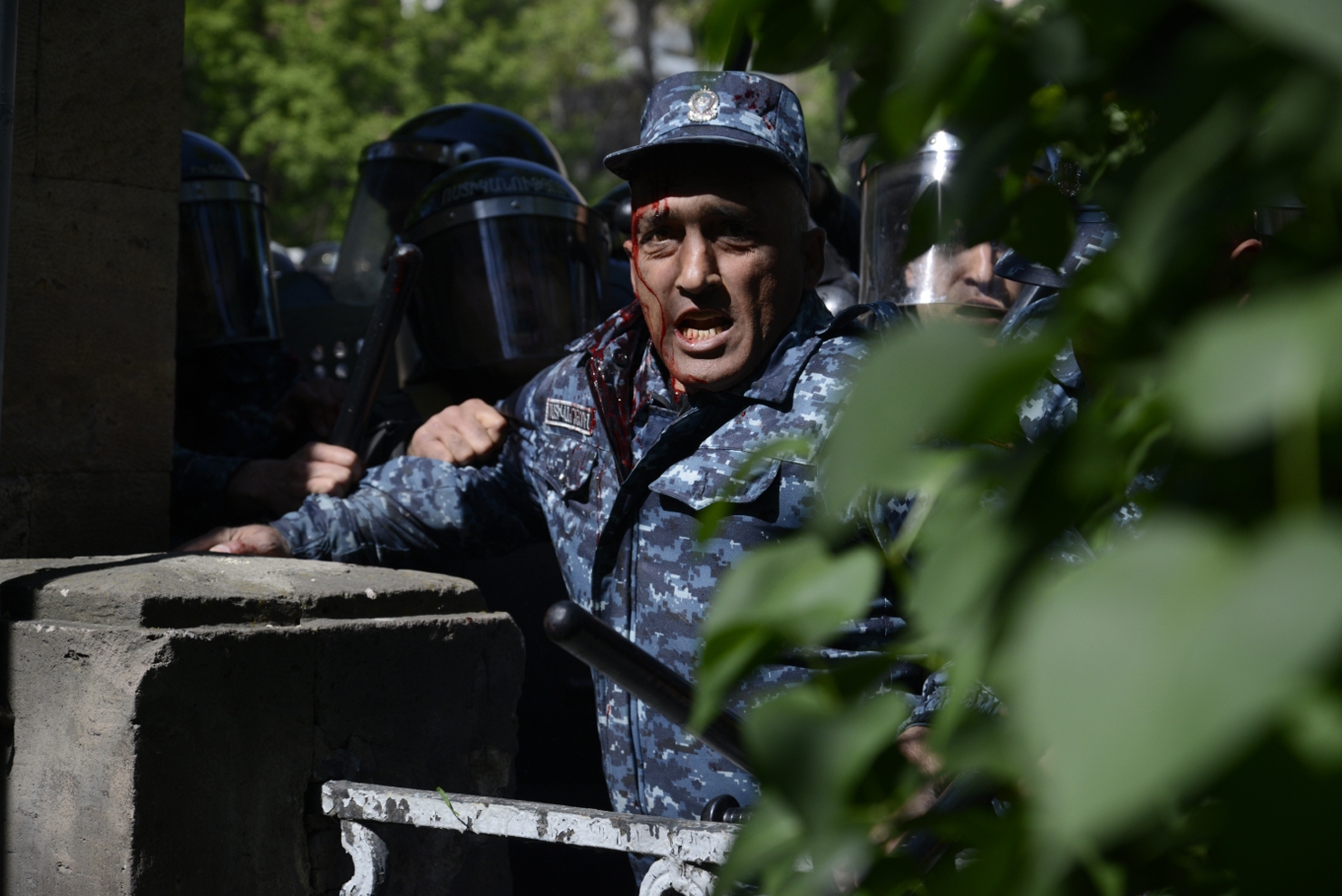 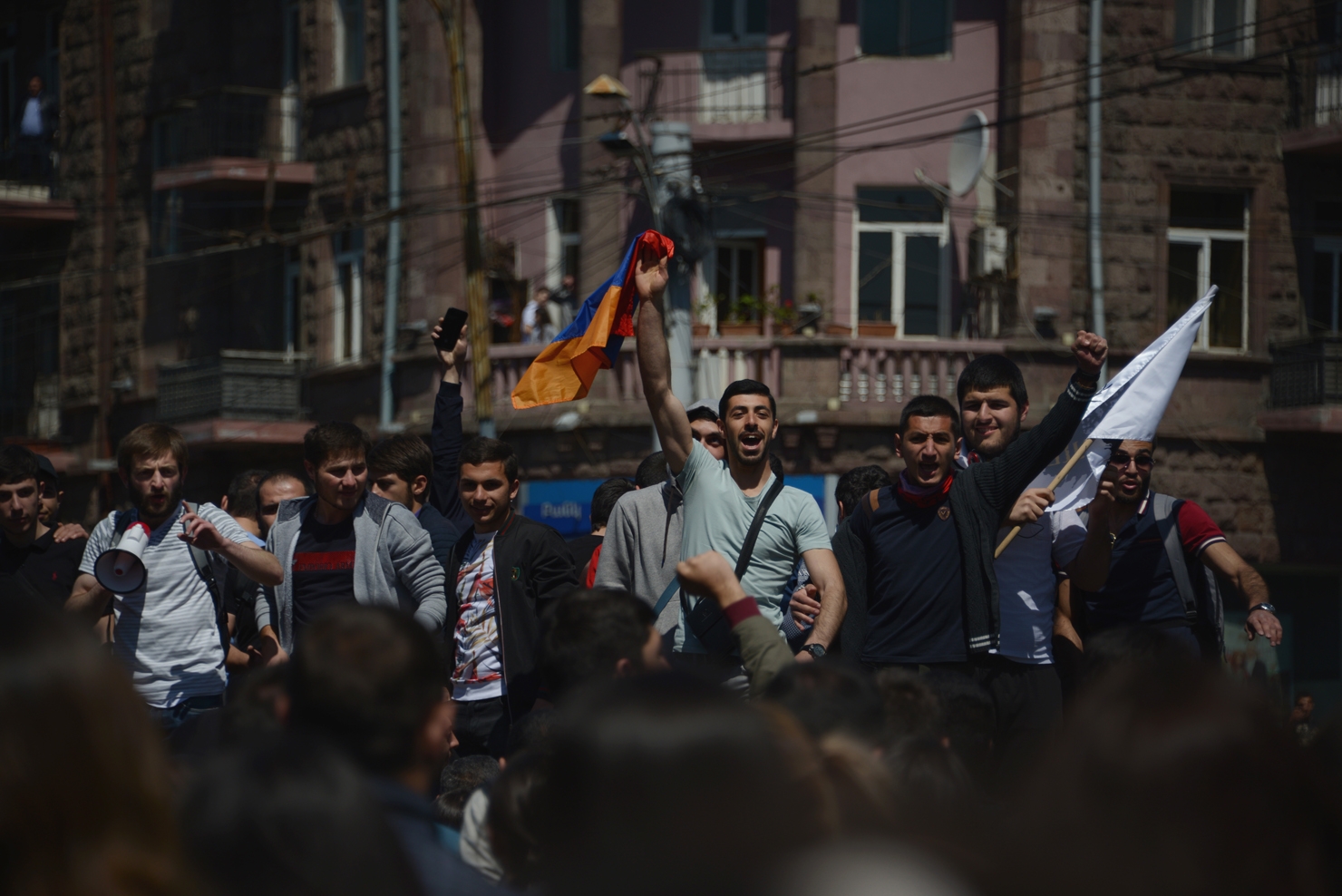 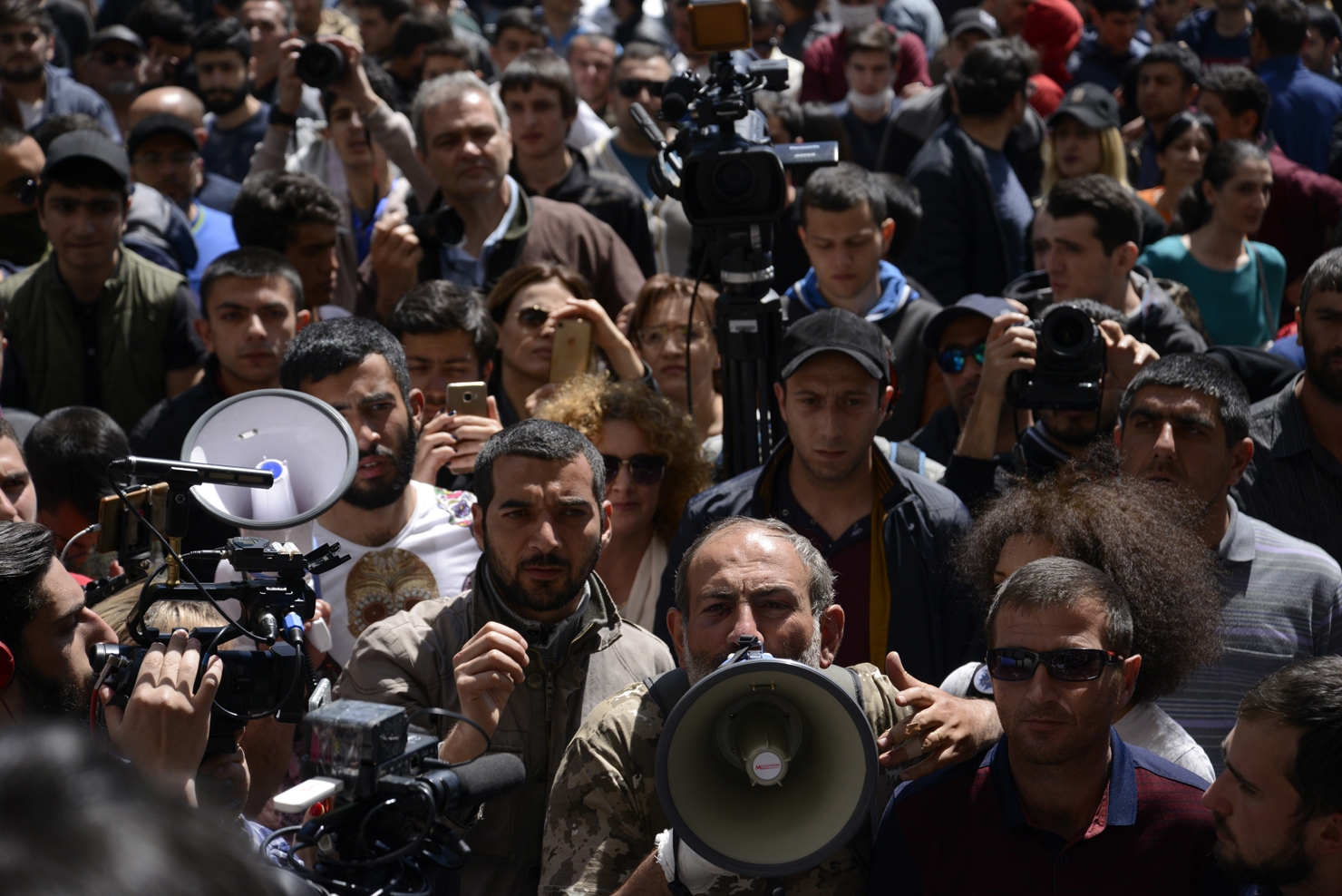 "Way Out" (Yelk) Alliance MP Nikol Pashinyan didn't go to the National Assembly to vote on Serzh Sargsyan's premiership on April 17, but stayed with protestors. (Vaghinak Ghazaryan/4Plus)
prev
next

On the fifth day of demonstrations, thousands rallied in Yerevan, shutting down the capital. Local media reported that demonstrations had spread to other cities.

Sargsyan resigned as president a week ago and, under a new constitution that makes the premier the country's most powerful figure, is set to extend his unpopular rule indefinitely.

In his acceptance speech following the 77-18 vote, Sargsyan touted the accomplishments of his 10-year rule. Yet he acknowledged frustrations and economic decline.

“I am sure that many, many people in Armenia, at least 60 percent or maybe even more, are unhappy with everything,” Sargsyan said. “In any family, children may well be unhappy with their parents or vice versa. But that doesn’t mean a conflict.”

Turning to face members of the opposition Yelk bloc, he added, “To live in a just Armenia, indeed we should avoid waking up the country’s extinct volcanos. And they won’t be woken unless there are those to provoke them.”

Yelk’s most prominent member, however, wasn’t in the room. Sporting a camouflage T-shirt and cargo pants, with a black eye and hand bandaged from scuffles with police the day before, opposition MP Nikol Pashinyan was busy coordinating the crowd gathered outside.

"The National Assembly marionette session has started, and so are mass protests across the republic,” Pashinyan, leader of the Yelk (“Way Out”) movement, proclaimed through a bullhorn, in comments cited by Armenian Public Radio. “I officially declare: Armenia has entered a revolutionary situation, and I hereby announce the start of a peaceful, people’s velvet revolution.”

Increasingly, the events of the past five days appear to be a stand-off between Sargsyan and Pashinyan.

Sargsyan, the 63-year-old president of Armenia’s Chess Federation, likes to wait and make the last move, say opponents, preferably one that decides the game’s outcome.

As both Pashinyan and Sargsyan vie for authority, it is unclear if either has a plan. Yet the odds are stacked firmly in Sargsyan’s favor. Not only has he been Armenia’s elected leader for the last 10 years, he officially controls the security services and presides over a party uniquely loyal to him personally – a party that lists many of the country’s richest people as members.

For his part, 42-year-old Pashinyan has a controversial record and limited resources. A Yerevan University dropout, he began his career as a reporter for Armenia’s budding independent media in the 1990s. In 1999, he took over as editor of Haykakan Jamanak (“Armenian Times”), an influential and staunchly anti-government daily.

He emerged on Armenia’s political stage during the crisis following the disputed 2008 election, when he worked for President Levon Ter-Petrosyan’s campaign. Ter-Petrosyan, the country’s first president, lost the vote to Sargsyan. The election was followed by mass protests that led to 10 deaths. Pashinyan was sentenced to a seven-year jail term for his role in staging the demonstrations, only to be released under an amnesty the following year.

Pashinyan first entered parliament as a Ter-Petrosyan loyalist in 2012. By 2015, he was branding himself an independent protest leader during the so-called “Electric Yerevan” demonstrations. Begun as a protest against high electricity bills, Electric Yerevan grew into a movement that challenged Sargsyan’s power. The following year, Pashinyan tried to harness mass demonstrations in support of a fringe opposition group that had violently seized a police station.

Throughout his political career, Pashinyan has capitalized on movements he didn’t start. For combining a commitment to civil unrest with his spot in parliament, Pashinyan has been accused of being a puppet revolutionary, somebody taking orders from the presidential administration so as to give Armenia a democratic veneer.

Pashinyan’s integrity, indeed, has sometimes been in doubt. During the 2017 parliamentary race, in which he and six other Yelk bloc MPs secured their seats with a grassroots campaign, campaign volunteers would privately admit, “I don’t trust Nikol, but Yelk has a chance.”

Still, the last four days have helped Pashinyan assume the role of Armenia’s opposition leader. Though the protests were largely begun by two non-parliamentary groups that appeared after Sargsyan indicated he would seek the premiership – Reject Serzh and For the Name of Armenia – it is now Pashinyan who effectively heads the opposition.

In his camouflage and backpack, Pashinyan has spent five days running around Yerevan proving he has learned some lessons from 10 years in the opposition. To prevent violence, he coined a slogan – “the police are our brothers” – and pointedly apologizes to police on the street for the inconvenience. To maintain public attention, he appears at surprising locations, storming a university campus and occupying the public radio studios.

Late on April 17, on Yerevan’s Freedom Square, Pashinyan called on protesters to return tomorrow and continue to paralyze the capital. For now, it’s his move.

Pashinyan celebrates victory and declares “dictatorship of law and justice”