Gagik Khachatryan’s nephew has also been taken into custody. 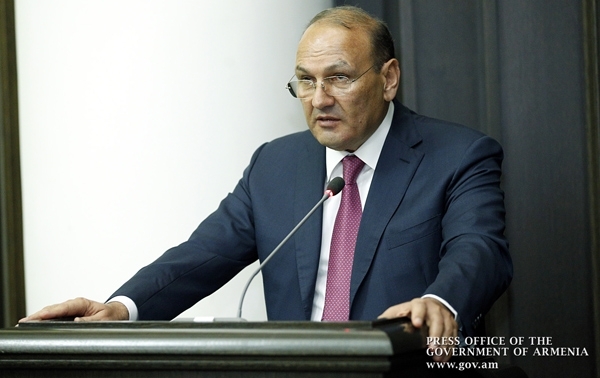 A Yerevan businessman who was once such a powerful government official that he was known as Armenia’s “super minister,” was arrested on August 27.

Gagik Khachatryan, a former finance minister and former chairman of the State Revenue Committee, is suspected of large-scale embezzlement and abuse of power.

“Searches are being conducted at Khachatryan’s apartment, mansion and other properties along with the properties of people connected to him,” Artur Vanetsian, the head of the National Security Service, told reporters. Khachatryan’s nephew Karen Khachatryan, who used to run an internal security division of the State Revenue Committee, has also been taken into custody.

The Special Investigative Service, an accountability office with government oversight, has already recovered $1.7 million in “damage inflicted on the state” by the former minister, a spokesperson said.

The former minister allegedly runs a vast business empire, from property to telecommunications, though he denies personally owning any businesses or luxury properties in Armenia or abroad.

Khachatryan’s dealings were subject to renewed scrutiny after he appeared in reporting earlier this year by the International Consortium of Investigative Journalists and Armenian investigative website Hetq, part of the ongoing Paradise Papers exposé. Hetq found that one company owned by another Khachatryan nephew, Bradwell Investment Corp., had been accused of money laundering in 2015 by the government of the Seychelles.

Khachatryan, 64, was appointed as a head of the tax service in 2008 and left in 2014 to become finance minister. He stepped down in 2016. Corruption allegations and other accusations shadowed most of his years in government.

Since the “Velvet Revolution” that toppled longtime leader Serzh Sargsyan early last year, it seemed only a matter of time before Khachatryan was arrested. In July 2018, local businessman Mekhak Gabrielyan claimed that Khachatryan used his position as head of the tax committee to pilfer $64 million. Prosecutors found no basis to press charges from that complaint. But then, in June 2019, SIS began to investigate his dealings as finance minister.