President Armen Sarkissian is a holdover from the old regime, but he's carved out a key role in Armenia's post-revolutionary government. 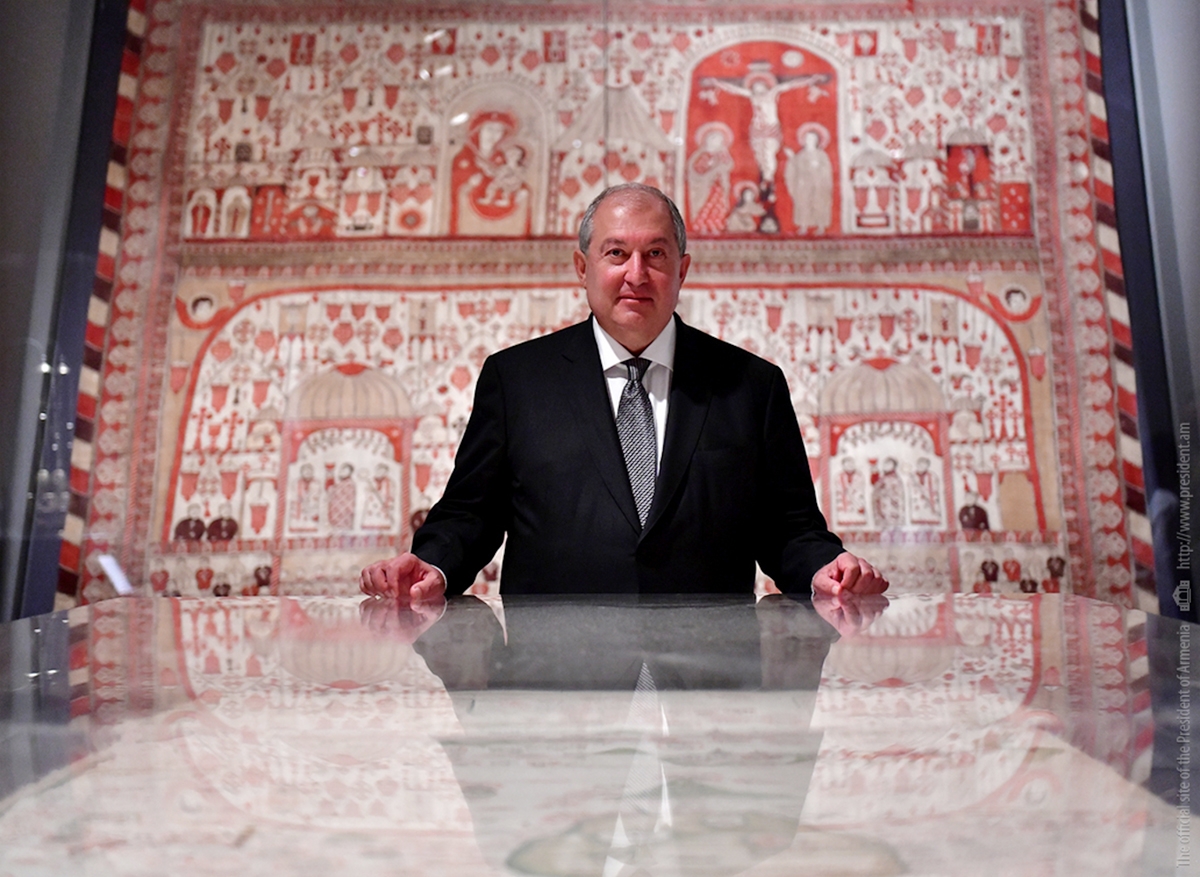 President Armen Sarkissian has not only survived Armenia’s uprising, but appears to be thriving. (president.am)

When parliamentarians from Armenia’s old guard joined forces in early October to try to block Prime Minister Nikol Pashinyan’s ability to hold early elections, Pashinyan dubbed the move a “counter-revolution” and called his supporters into the streets to oppose it. But what ultimately defeated the bill was a veto by an erstwhile member of the old guard – President Armen Sarkissian.

Sarkissian's role in defusing the crisis highlighted his unlikely prominence in post-revolutionary Armenia. According to the constitution, the president is a virtual figurehead. And other members of the former administration are being aggressively prosecuted by the new authorities.

And yet, Sarkissian has taken an improbably high-profile role in the new administration. Following his veto of the election bill – which likely played a key role in convincing Pashinyan’s former parliamentary partners to return to the fold and support the elections – he undertook a whirlwind international tour, visiting senior officials in France, the United States, and Russia.

As the dust settles from the tumult of the dramatic transition earlier this year, Sarkissian has not only survived the revolution, but appears to be thriving.

Sarkissian has been a part of Armenian politics since the beginning, as independent Armenia's first ambassador to the United Kingdom. He served a four-month stint as prime minister in 1996 and 1997, after which he resumed his role as ambassador. In 1999, he stepped down as envoy but remained in the U.K. as a private citizen, undertaking a series of prominent consultancies for major international companies such as British Petroleum, Bank of America, and Merrill Lynch. He also developed a close relationship with the British royal family and built a multi-billion dollar business empire throughout Europe and the former Soviet Union, according to an investigation by the online news outlet Hetq.

He returned to Armenian politics in 2013 when he was once again appointed ambassador to London, this time by President Serzh Sargsyan. On March 2, roughly a month before the protests that would culminate in Sargsyan's overthrow and Pashinyan's rise to power, Sarkissian was elected president by a parliament dominated by Sargsyan's Republican Party. Pashinyan and his Yelk bloc in parliament voted against him.

During the spring uprising it seemed that few from the old government were safe. Posters were plastered on streets across Armenia showing the “enemies of the revolution,” and few were spared: Serzh Sargsyan, his brother Alexander, the Catholicos of All Armenians (the top church official), and a range of other Republican Party members and oligarchs were targeted. Even ostensible supporters of the uprising, like oligarch Gagik Tsarukyan, were received skeptically.

But Sarkissian was – and remains – apparently immune to the vitriol directed at many members of the old guard. Even before Pashinyan's “Velvet Revolution” succeeded, Sarkissian appeared to be hedging his bets. He made one visit to Republic Square at a key moment in the protests, after which he said the atmosphere at the rally was “fantastic” and his discussion with Pashinyan “constructive.” Immediately after Sargsyan resigned, Sarkissian went further and said: “I'm ready to stand between the police and protesters if I have to.”

In the aftermath of the transition, Sarkissian presented himself as a member of the new guard, engaging closely with Pashinyan and other key revolutionary figures. A photo op of him happily sharing ice-cream with children at the presidential residence seemed to set the tone for his new role.

“In the person of Nikol Pashinyan, I discovered for myself a talented, quick-thinking, willing and diligent person, with whom I pursue very good working relations,” Sarkissian told reporters in May. “I do not spot any problem in working with him; on the contrary, I believe we can successfully work together.”

The relationship has, at the same time, been distant. As recently as June, Pashinyan questioned Sarkissian’s eligibility as president, since Sarkissian had given up his Armenian passport for a British one, thus potentially becoming legally ineligible for the presidency under the constitution.

The relationship between the two men is more fraught than the rhetoric and photo ops would have one believe, said Zhanna Andreasyan, a sociologist at Yerevan State University.

“If you look at the president’s website, you will see that almost no information is provided in which Pashinyan is mentioned,” Andreasyan told Eurasianet. “The same is true for Pashinyan’s websites: no mention for Sarkissian even when both of them were participating in the same event. It seems that they ignore each other. They talk about each other only when there is no chance to escape from the topic.”

While Pashinyan has focused on internal affairs – in particular waging battle against the remnants of the old regime – Sarkissian has taken the lead on the international front, where his image of stability, respectability, and continuity is useful in soothing those rattled by the uprising, including foreign investors and the Kremlin.

Sarkissian's “great foreign policy experience allows him do this, while certain deficiencies in this sort of experience in the new government facilitates it,” Artur Ghazinyan, who heads the Center for European Research at Yerevan State University, told the Russian newspaper Kommersant.

Sarkissian also plays a key role as a bridge between Pashinyan's team and the old guard. Many in the Pashinyan government “are not fans” of the president, said Stepan Grigoryan, director of the Yerevan-based Analytical Center on Globalization and Regional Cooperation, and author of a recent book on the spring uprising. But it is his key position in holding a check on the power of parliament and acting as a “moderator” between the old and new regimes that Pashinyan needs, Grigoryan told Eurasianet.

Sarkissian, meanwhile, continues to strengthen his position in Armenia. “What he is doing is accumulating international legitimacy which always works as a crucial factor for further internal legitimacy,” Andreasyan said. She said that were Pashinyan’s ongoing anti-corruption campaign to find Sarkissian in its crosshairs, international legitimacy would serve him well in his subsequent life as a private citizen and businessman outside of Armenia.

How long Sarkissian will play this role is unclear. Parliamentary elections are expected in early December, after which Pashinyan is likely to have his own parliamentary majority.

Andreasyan suggested that, in the medium term, Sarkissian could become the locus of opposition to Pashinyan and the prime minister’s “honest populism.”

With his gilded pedigree and “neoliberal” outlook, Sarkissian represents business interests, Andreasyan said. Certainly, his vision for Armenia is clear. During his speech last week at the Francophonie Economic Forum, Sarkissian said, “This nation [Armenia] is a trading nation.”