Armenia's uprising spreads to its church 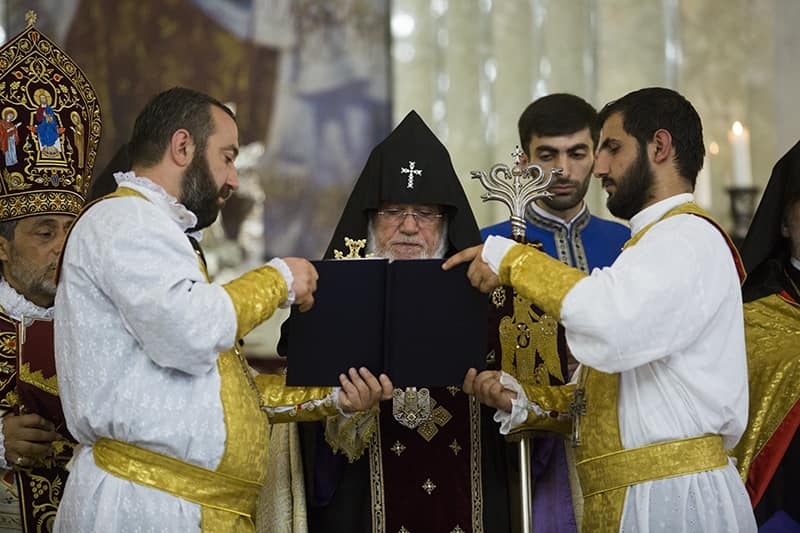 The Catholicos of All Armenians Karekin II celebrating the liturgy at Mother See of Holy Etchmiadzin. (Photo: Facebook)

On a dirt road high in the mountains of southern Armenia, the Catholicos of All Armenians Karekin II, the top figure in the Armenian church, stood puzzled as a group of protesters surrounded him, shouting.

“Step down! Leave the Holy See!” chanted the crowd, including young monks in black robes, as they physically blocked him from getting into his SUV.

The protesters were part of a movement that has been targeting the deeply unpopular Karekin, an effort inspired by the recent toppling of Armenia's longtime political leader, Serzh Sargsyan – known as Serjik to his detractors. “Karekin, leave! Join Serjik!” they chanted, even pushing and grabbing him, as seen in an extraordinary video that shocked Armenians both for its aggression against the Catholicos and for the surprising vulnerability he displayed.

Eventually police were able to bundle the cleric into his vehicle. But the July 14 encounter highlighted the growing challenges facing Karekin and the church in the new Armenia.

The movement to oust him, called “New Armenia, New Patriarch,” has been holding rallies in downtown Yerevan, recording video appeals against Karekin, and picketing his office in Etchmiadzin, the ancient seat of the Armenian church just outside Yerevan.

The movement is being led by Hieromonk Koryun Arakelyan, the abbot of the Gndevank Monastery, where Karekin II visited on July 14 in attempt to negotiate with the monastery brethren. Arakelyan is a theological hardliner with a large following across Armenia, well-respected for his piety and devotion. Since April, when protests led by Nikol Pashinyan toppled Sargsyan, Arakelyan has been in Yerevan leading the effort to bring about a similar result in the Armenian church.

The parallels are inescapable: Arakelyan's followers compare him to Pashinyan and see Karekin as a Sargsyan that the church has yet to force out.

Karekin II is indeed, like Sargsyan, extremely unpopular and widely considered corrupt. His predecessor, Karekin I, was respected as a nonpartisan spiritual leader for both Armenians and the large diaspora. But Karekin II 's lavish lifestyle has been difficult to hide in the small country. Plus, he allied himself closely with the ousted Sargsyan, regularly appearing alongside the former president and giving his explicit political support.

Karekin II's rule has been beset by scandals. In 2011, a leaked video showed him in business talks over wine with his Georgian counterpart, Patriarch Ilia II; Karekin’s emboldened tone and mafia-like mannerisms embarrassed many in Armenia.

In 2015, an investigative report revealed that he had a million-dollar Swiss bank account. And in April 2018, a video showed the church leader fawning over a jewel-encrusted crozier presented as a gift by a Russian businessman.

The Catholicos also has been accused of nepotism for consecrating a number of priests and bishops from his native village of Voskehat.

While these criticisms are widespread, the protesters of the “New Armenia, New Patriarch” initiative go further. They endorse a hardline version of Oriental Orthodox Christianity and have criticized Karekin for meeting with “heretics” – namely gay female Anglican bishops and Freemasons – and even accuse him of being secretly married and having children.

Arakelyan is also known to be skeptical of Karekin's rapprochement with the Eastern Orthodox Churches, including Greek and Russian, because of their doctrinal differences with Armenian Christianity, which has intercommunion with the Coptic, Syriac and Ethiopian churches.

Unlike Pashinyan, however, Arakelyan isn't trying to nominate himself for the leadership position.

“It’s an unspoken rule in the history of our church – when a Catholicos loses his mind, the monasteries' abbots have to preserve common sense or fight against heresy,” said Levon Hakopian, a Moscow-based activist who is currently in Armenia to help coordinate the movement.

Hakopian claimed the protest is supported by others among monastic hierarchies and parish priests across the country, but said he couldn’t give names for security reasons: “Look, Father Koryun’s car has been followed, and there were a couple of cars waiting outside our office day and night,” Hakopian said. He said the vehicles’ plates traced back to Voskehat, Karekin’s native village and power base.

While the “New Armenia, New Patriarch” movement is inspired by Pashinyan's “Velvet Revolution” this past spring, it is not of it.

“These protests are directly influenced by the revolution. People realize that protesting isn’t fruitless or necessarily dangerous,” said Karen Aghekian, a Minsk-based editor for Hamatext, an online magazine covering Armenian politics. However, he added, “civil society activists are absolutely indifferent to the church and what’s going on inside of it. Their life depends on fixing politics, the economy, and social issues, and not the church.”

Youth activists who helped topple Sargsyan mostly have mostly ignored the protests. “I’m not at all interested in church life,” said Anush Lalaian, a longtime anti-government protester and now adviser in the Ministry of Diaspora. “I just have no interest in ecclesiastical issues.”

The protesters' confrontational tactics might be another factor limiting their popularity, suggested Hovhannes Igityan, a political commentator and former chairman of parliament’s Committee on Foreign Relations. “I don’t think aggressive actions can lead to the Catholicos’s resignation. Moreover, they can backfire,” said Igityan.

“Yes, the Catholicos of All Armenians perhaps has done a lot wrong and isn’t the best Catholicos in our history, but perpetrating violence and grabbing him by the shirt front is categorically unacceptable for me,” wrote Alen Simonyan, a member of parliament from Pashinyan's Yelk bloc, in a Facebook post.

The ARF Dashnaktsutyun, a party formerly aligned with Sargsyan but which has now sided with Pashinyan, has come out in support of Karekin: “Church-related issues are unacceptable. I don't understand why we are so reserved, thus pushing the society towards confrontation. Those in power should establish law and order in the country,” said Hrant Markarian, the head of the party, on July 18.

Soon after the Gndevank humiliation, the Catholicos moved to defrock Arakelyan. The move was publicly supported by a number of bishops, and Mikael Ajapahyan, bishop of the Shirak diocese, went as far as to denounce the protesters as “morally dead.”

The protesters, meanwhile, are retooling their tactics and suspending street protests, said Hakopian, the Moscow-based activist. “We started by emphasizing Karekin’s lack of authority and his connections to the former regime, but now we plan to publish exposés on his businesses and bank accounts and violations of church canon laws.” Karekin's allies have said the activists have no supporting evidence.

For his part, since being elected Pashinyan has refrained from publicly commenting on the issue.

“I just don’t know what the government or civil society can do here, given the constitutional separation of church and state,” said Igityan. “This is a church issue really.