Russia appears to accept Armenia's protest leader, but his politics may be at odds with Moscow's interests there. 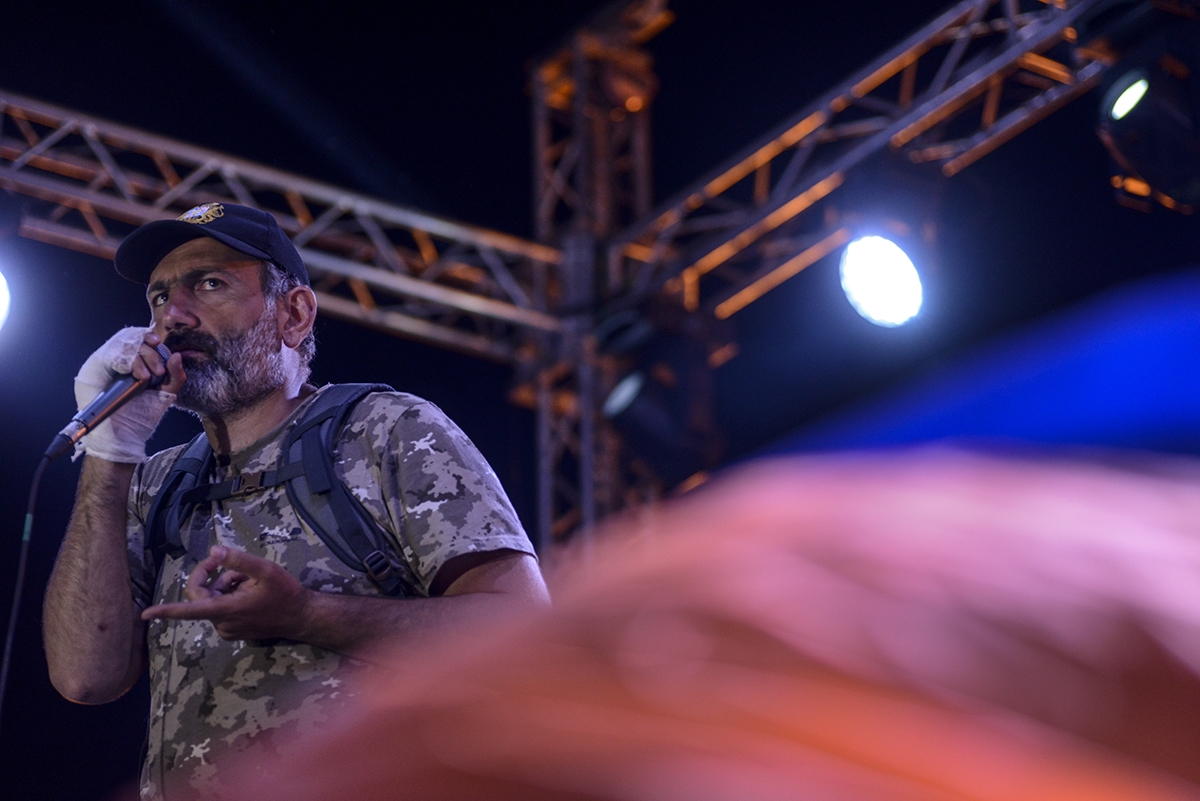 Nikol Pashinyan at a rally in Yerevan on April 25. (Vaghinak Ghazaryan/4Plus)

The leaders of the protest movement that toppled Armenia's longtime leader Serzh Sargsyan have studiously – and so far successfully – avoided making their call for a “velvet revolution” about Armenia's foreign relations.

But not far under the surface of the protest movement lie strongly skeptical attitudes of the country's tight relationship with Russia. And if, as seems increasingly likely, a fundamental change in Armenia's politics is underway, the country's relationship to Russia will come under pressure.

Moscow tends to hold a dim view of popular revolts in its post-Soviet allies, regularly warning of the danger of so-called “color revolutions” such as those seen in Georgia and Ukraine. And it generally saw Sargsyan as a reliable, if not enthusiastic, steward of Russian-Armenian ties.

Nevertheless, the Kremlin has maintained a hands-off attitude toward events in Yerevan.

“For now we see that the situation is not unfolding in a destabilizing way which is a cause for satisfaction,” Kremlin Spokesman Dmitry Peskov told reporters the day after Sargsyan stepped down.

The leader of the anti-Sargsyan movement, Nikol Pashinyan, carefully avoided voicing any international agenda during the protests. And when Sargsyan stepped down, Pashinyan took pains to announce that he did not foresee any significant changes to Armenia's relationship with Russia. He has said that he supports staying in the CSTO and EAEU and keeping the Russian military base.

Pashinyan and other leaders of the movement met Russian officials at their embassy in Yerevan on the evening of April 25, and Russia appeared to give its tacit approval. “I met with official representatives from Moscow, who assured me of Russia's noninterference in Armenia's internal affairs,” Pashinyan told a rally the same evening.

In the past, however, Pashinyan and other protest leaders have taken more Russia-skeptical positions. The Yelk bloc in parliament, to which many of the leaders including Pashinyan belong, submitted a proposal last year to leave the EAEU. Pashinyan has also expressed skepticism about the CSTO's value to Armenia.

At a press conference on April 24, the day after Sargsyan resigned, Pashinyan alluded to the possibility of geopolitical shifts in the future. “We're not going to make any sharp geopolitical movements. We're going to do everything in the interests of Armenia. Any question has to be discussed in its own time,” he said.

At the protests, many of the participants, unprompted, criticized Sargsyan's close ties to Moscow and expressed hope that a change in government would lead to a less pro-Russia orientation.

“You're not from Russia, are you?” one protester asked angrily when approached by a reporter during one of the low moments of the movement, shortly after Pashinyan had been arrested. “Good. All of this is Russia's fault.”

After Sargsyan stepped down, another protester – asked what his hopes for the country were now – put foreign relations close to the top of list: “We hope that the politics won't be only pro-Russia, that they will be more balanced.”

And even as Moscow has stayed relatively sanguine about the events unfolding in Armenia, many pro-Kremlin commentators have been framing the developments as a potentially dangerous color revolution. The protest leaders “are committed to the West,” said analyst Nikolai Spiridonov in an interview with the Russian news agency RIA Novosti's Ukrainian service. “We can assume that if one of them becomes president or prime minister, under the new system, then the balance of power in the country will change in favor of the West.”

One Russian meme has the Kremlin's attack dog TV anchor Dmitry Kiselyov asking Russian President Vladimir Putin: “I don't understand – are the Armenians now Banderovtsy, or not yet?” (“Banderovtsy” is a Russian derogatory term for Ukrainian nationalists and a key trope in Russia's information war against Ukraine's 2014 “Maidan” revolution that brought in a pro-Western leadership.)

“Pashinyan wants a pro-Western political course,” said Anton Evstratov, a Russian commentator and history professor in Yerevan. But there are deep security and economic ties that bind Armenia to Russia, which will make it difficult for him to implement any sort of pro-Western agenda, Evstratov said. “The question is, is he able to put his pro-Western views into reality?”

He said that Russian officials' low-key reaction also is the result of a belated understanding that the Kremlin's heavy-handed approach backfired. Evstratov said he was “surprised” by the “soft” reactions from Russian officials like Peskov, but said that they appeared to have learned from their mistakes in Georgia (during the Rose Revolution of 2003) and Ukraine (during the Maidan revolution of 2013-14), when the heavy-handed Russian reaction exacerbated events and largely turned the two countries against Russia. “They [Russians] are doing it much more professionally now.”

Pashinyan and his colleagues could be compared to “Euroskeptics who come into parliament on a nationalistic movement, but when they are in power they become far more moderate and able to negotiate,” said Yuri Kofner, head of the Eurasian sector of the Centre for Comprehensive European and International Studies at Moscow's Higher School of Economics, and an advocate of greater Eurasian integration. “I think the situation can be similar here.”

Styopa Safaryan, a former member of Armenia’s parliament who advocates closer ties with the West, said Russia is likely reassured by Pashinyan's relatively balanced foreign policy orientation. Pashinyan did advocate leaving the EAEU, “however, he also was not supporting Armenia's full European and Euro-Atlantic integration,” Safaryan told Eurasianet. “Pashinyan will not change Armenia's foreign policy agenda and there is nothing to threaten Russia and Russian interests.”

He added, though, that free and fair elections – one of Pashinyan's major demands – could help more openly pro-Western parties gain a foothold in the country.