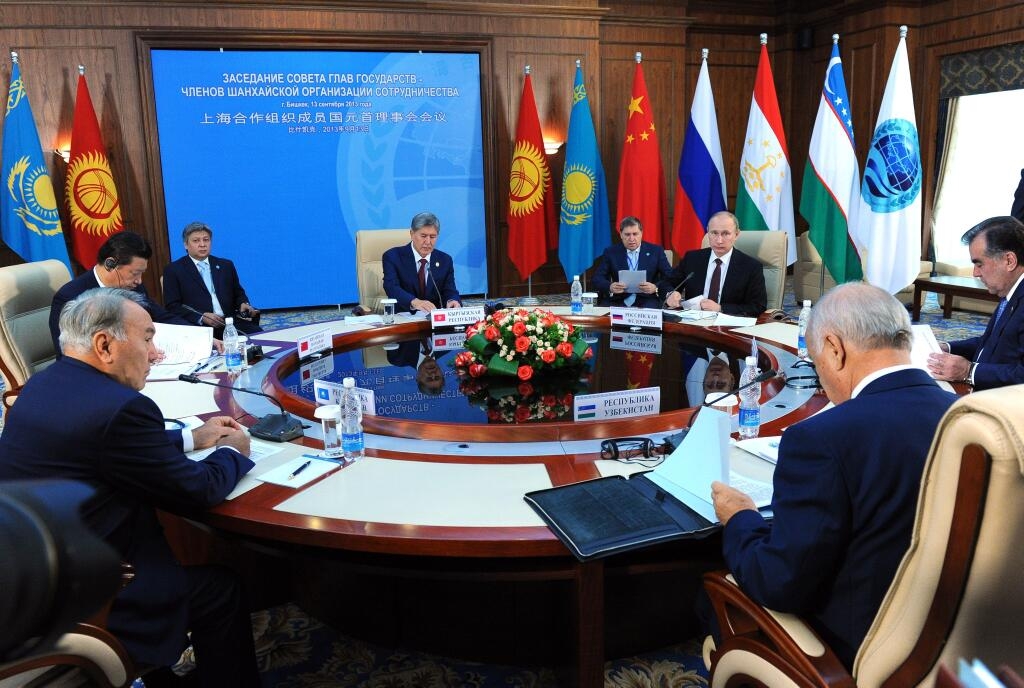 The Shanghai Cooperation Organization held its annual summit in Bishkek on Friday, and even by the standards of this opaque organization, the results are unclear. Heads of state of the six SCO members – Russia, China, Kyrgyzstan, Kazakhstan, Uzbekistan, and Tajikistan – attended, as did those of observer states Afghanistan, Iran, and Mongolia, and delegations from India and Pakistan. (It's not clear who Turkey -- which formally became a "dialogue partner" with some fanfare earlier at last year's summit -- sent to Bishkek, suggesting it was a low-level official and that the organization is not a big priority for Ankara.) Much of the discussion seemed to be about issues outside of the SCO's mandate (as far as that has been defined so far) -- obviously Syria was a large topic, as was Iran's nuclear program. RFE/RL did the thankless job of liveblogging the event, recommended for those wanting to catch up on the small bits of news that the summit offered up.

The SCO, being ostensibly a security organization, and one whose members are all pretty close to Afghanistan, would seem to have a lot of work to do as next year's U.S./NATO withdrawal from Afghanistan looms. And while the issue was of course discussed, it remains entirely unclear what the SCO could actually do in Afghanistan. Inaction has been a flaw of the organization since its inception, wrote Alexey Malashenko in a piece for the Carnegie Moscow Center.

[T]he SCO has so far demonstrated no tangible achievements. Its decisions on economic cooperation, anti-terrorist efforts, and situation in Afghanistan have remained on paper. Reading analytical materials on the SCO reveals countless plans and projects, but provides no information on how these projects have specifically been carried out.

As Raffaello Pantucci and Li Lifan wrote in a pre-summit analysis in The Diplomat, the organization is perpetually hamstrung by the lack of a common vision of its members:

The problem for the SCO is that it remains an organization lacking a clear sense of its role in the world. This is a problem that is fundamentally about the very divergent views among the member state capitals (all of whom have equal weighting within the institution’s decision-making processes), and in particular Beijing’s desire to create a positive umbrella under which to shelter its efforts in Central Asia, even as other members worry about Chinese dominance.

The result is a half-baked multilateral vehicle that focuses on arcane discussions about membership with no conclusion, and holds military exercises aimed at unspecified enemies. On the one hand, this helps develop relations and bonds in a region rife with internal tensions, but on the other it fails to deliver much in the way of practical progress.

Specifically in the case of Afghanistan, the two major powers in the organization, Russia and China, have diverging views on Afghanistan, Shashank Joshi told RFE/RL:

"China is traditionally worried about Islamic extremism emanating from Afghanistan," he says. "At the same time it has opened channels with the Taliban and has a strong relationship with the Taliban's primary external backer, Pakistan. So China is keeping its options open. The Russians are more firmly ranged against the Taliban, more skeptical about the Pakistani role and will probably be more prone to backing anti-Taliban forces."

The most concrete result of the summit is related to Afghanistan: a meeting, again held in Bishkek, on October 10 dedicated to Afghanistan. But the problems of Afghanistan aren't going to be solved by meetings, and the SCO is increasingly looking like little more than a talk shop.