The region appears wholly unprepared for the latest rise in cases. 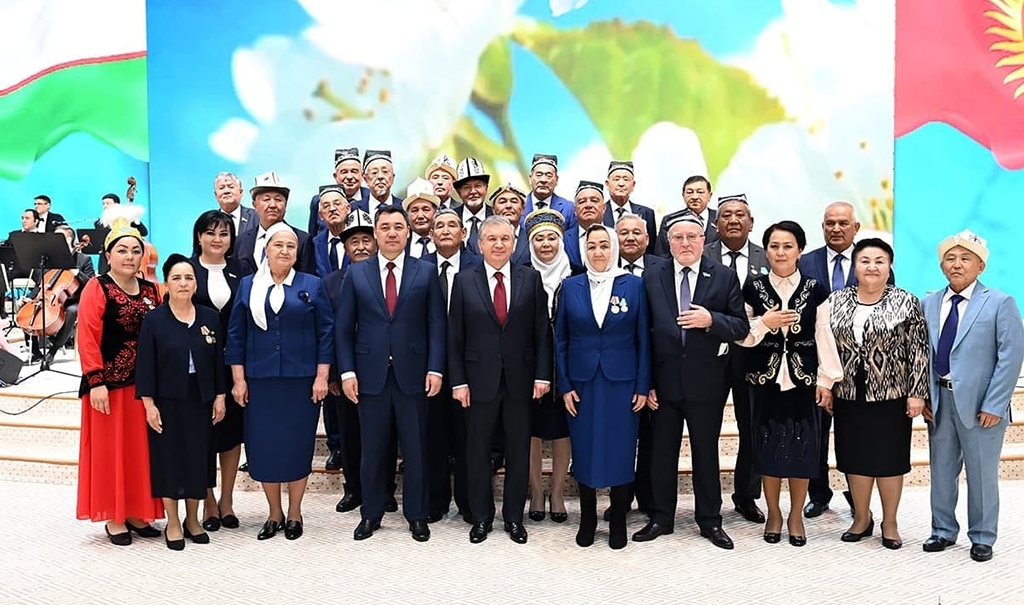 Not modeling caution: A meeting of the Kyrgyz and Uzbek presidents on March 11 (Uzbek government handout)

Many people in Central Asia have long since dropped their guard against the COVID-19 emergency.

There are worrying signs, however, that the complacency is ill-founded.

In Uzbekistan, the Health Ministry on March 14 reported 111 new cases – the highest one-day total since late December. Two days later, they reported 115 cases. The authorities have likely been undercounting substantially since the crisis began, so those figures are only indicative.

It is a similar story in Kazakhstan. Officials there confirmed 1,082 known fresh COVID-19 infections on March 17. The trend shows a clear worsening of the situation. The average for the one-week period from March 11 was 964 daily cases. The week before it was 731.

Kyrgyzstan appears less flustered. It is not reporting any major uptick in cases, although its record of being able to provide reliable data is weak. But while Uzbekistan and Kazakhstan have initiated vaccination programs, Kyrgyzstan is weeks away from reaching that point.

Turkmenistan and Tajikistan claim to have thwarted the virus altogether, but their claims are underpinned by little more than systematic deception.

The spokesman for Uzbekistan’s Health Ministry, Furkat Sanayev, has blamed the renewed surge of COVID-19 infections on a lack of vigilance.

“Uzbekistan has not yet got rid of this disease. The outbreak is still here, the [coronavirus] is here,” he was quoted as saying by Gazeta.uz news website. “For a year now, the Health Ministry has been talking about the need to wear masks and maintain social distance. We must comply with these requirements.”

Cafes, bars and restaurants are indeed eagerly packing in customers. Concerts and shows have been permitted since late January. Sports stadiums are packed out, as are mosques. Public transport largely runs as in normal times, with no provisions made to enable the social distancing guidelines.

Schools and universities reopened after the New Year break, although schools and pre-school facilities have begun again closing their doors in recent days.

Almost nobody wears masks. That includes President Shavkat Mirziyoyev, who has steadfastly refused to adopt the protection, even at the peak of the crisis in summer or when out glad-handing fellow citizens in choreographed public events.

Rules for entry into the country have been slightly amended. Travelers were previously required to be in possession of a negative PCR-based test result from their country of departure and to submit to a rapid test on arrival. The arrival test was scrapped as of March 15.

While Sanayev admitted a rise in the number of cases, he was eager to defuse alarm.

“The overall situation is not as dire as they are saying on social networks,” he said.

It is never entirely evident that officials offering such breezy reassurances are in full possession of the real picture on the ground, though. A research paper recently published by specialists from the Virology Research Institute in Tashkent exposed this problem in stark terms.

Of the 87,000 people tested for SARS-CoV-2 antibodies in a two-week period in August-September, 23 percent were found to have them, the paper revealed. If those findings are correct, it means that that virus at some stage ripped through wide swathes of the population, granting many of them some form of immunity. And this is all while government data indicates that only a fraction of 1 percent of the population has been infected over the entire duration of the outbreak.

“This proves that the actual incidence of COVID-19, on the national average, was at least 165 times higher than officially reported,” the Virology Research Institute’s paper concluded.

It may not have helped that the paper was published in an obscure, no-name journal.

Kazakhstan has been more decisive in recognizing the evolving situation.

On March 13, it downgraded its national epidemiological status from green to yellow on its three-color scale. The most populous urban centers, Almaty and the capital, Nur-Sultan, are classed as critical red zones, however.

That latter status implies certain restrictions, although these have been notably limited in scope.

Red zones are now intensifying their rules. The city halls of Almaty and Nur-Sultan are prohibiting malls, covered markets, cinemas and other leisure facilities from opening on weekends. On Saturday and Sunday, public transport is only allowed to run in the morning and evenings.

Events to mark the upcoming Nowruz spring equinox festival, which always draws large crowds, has been nixed this year.

For those that have them, vaccines are the great hope.

Kazakh Health Minister Alexei Tsoi on March 16 said that since his government’s vaccination campaign had begun, more than 76,000 fellow citizens have received jabs of the Russian-developed Sputnik V. He said 180,000 doses of the vaccine would be delivered to the regions by the end of March, and that the number would reach 12 million by the end of the year.

Uzbekistan is banking on vaccinating 20 percent of its population by the year’s end. It is relying to that end on a blend of Sputnik V, Chinese-developed vaccines and, as of March 17, the 600,000 doses of the AstraZeneca vaccine it received under the COVAX global vaccine-sharing program.

Kyrgyzstan, meanwhile, is still awaiting its promised 500,000 doses of Sputnik V and 150,000 vials of the inoculation produced by China’s Sinopharm.

It is also anticipating receiving 500,000 doses of the AstraZeneca vaccine this month, although it has reacted to the alarmism of several European governments by putting that on hold.

“We have not fully given up on this vaccine, but we have had discussions about what is going on in Europe, and so we have suspended [deliveries],” Health Minister Alymkadyr Beishenaliyev was quoted as saying on March 16. “We are in parallel holding talks with COVAX about other vaccines.”

Beishenaliyev said there was nothing in the data to show a major cause for concern, however.

Independent research, like that run in Uzbekistan, has demonstrated that official figures are not proving even remotely helpful in understand the scale of the crisis in Kyrgyzstan, though.

Meanwhile, nearly nobody abides by the calls for precaution mutedly issued by health experts. As in Uzbekistan, cafes, shopping malls and cinemas are open as usual.

If another wave hits, Kyrgyzstan may be caught napping.