As Armenia effects its political transition, all eyes on Sargsyan

After 10 years, Armenia has a new president—but Serzh Sargsyan is expected to slide into the PM slot, now the country's most powerful position. 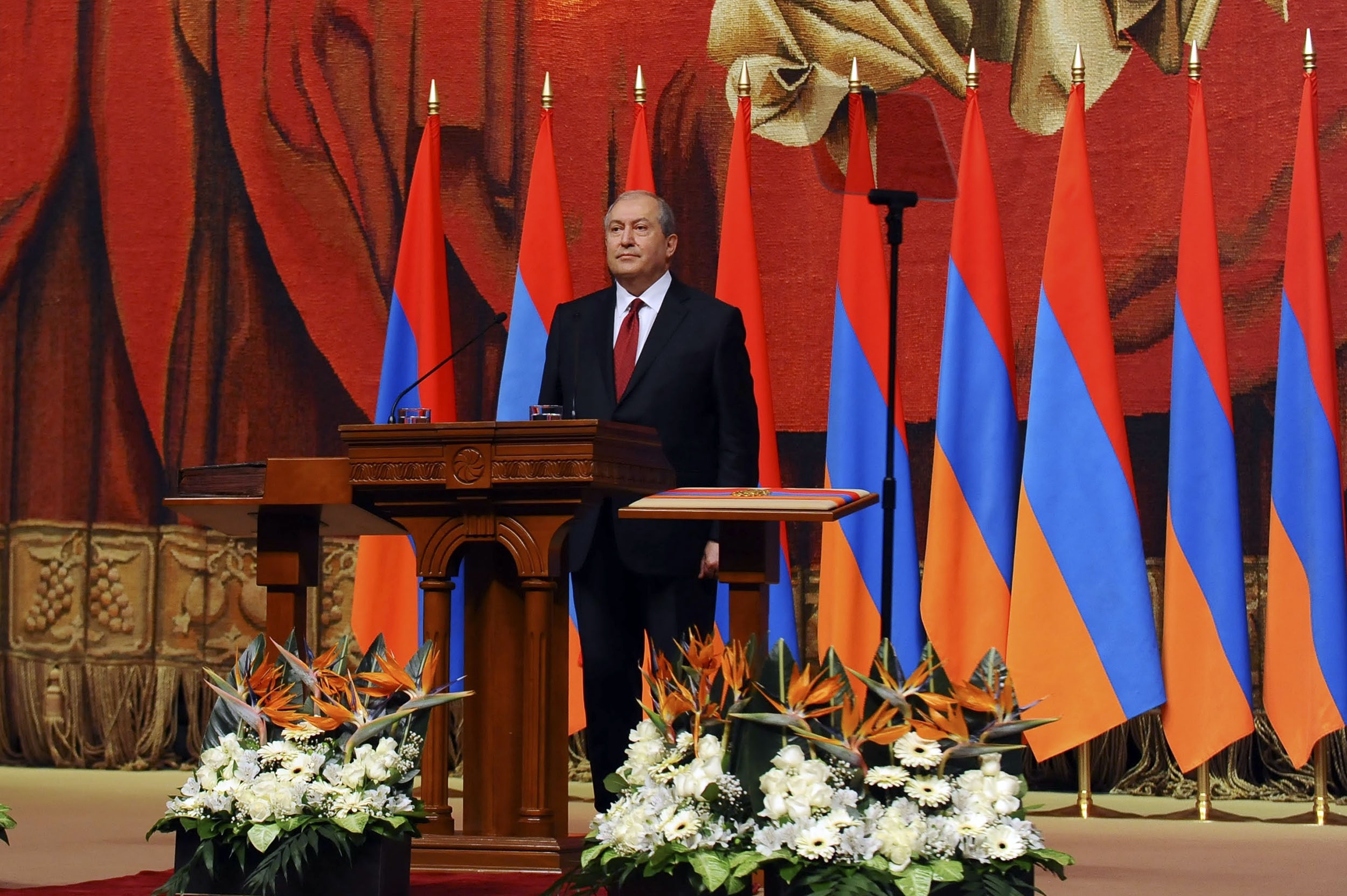 Armenian President Serzh Sargsyan stepped down on April 9 and handed his position over to Armen Sarkissian as the country's new constitution formally took effect, changing the country's political system to a parliamentary one.

Sarkissian, previously Armenia's ambassador to the UK, was sworn in at a special sitting of the National Assembly where he received a blessing from His Holiness Karekin II, Catholicos of All Armenians. Following his swearing-in, Sarkissian made a ceremonial visit to the Yerablur Cemetery, the burial ground of Armenians who died fighting in the war with Azerbaijan in the early 1990s.

But after stepping down, Sargsyan likely won't be out of a job long.

Within the next seven days, the parties and factions in the National Assembly will nominate their respective candidates for a new PM, and will vote on April 17. Only the ruling coalition’s pick matters, and it’s expected to be Sargsyan.

In 2014, when the country was preparing for a referendum on the new constitution, Sargsyan said he wouldn’t be running for reelection or assuming the premiership. However, he revisited that promise last month, saying the statement was taken out of context. He cited national security as a reason to stay in power.

The new position can give him even more executive power than a president’s office under the previous constitution. It also doesn’t have term limits.

Two days before stepping down, Sargsyan dropped a hint for how long he plans to go on as Armenia’s leader. “Our party will face the task of developing the country by 2022; I mean first of all me, as the leader of the party,” Sargsyan said at a meeting with outgoing PM Karen Karapetyan on April 7.

The U-turn hardly came as a surprise for anybody in Armenia. But expect little dissent. The domestic opposition is divided, and all the large diaspora organizations are reluctant to engage in politics in the face of what they see as Azerbaijani threat to national security. “The state of war with Azerbaijan ... seems to be an effective argument to silence the diaspora on the domestic political life,” wrote Philippe Raffi Kalfayan, a French lawyer and associate researcher at the Paris Human Rights Center at the University of Paris 2 Pantheon-Assas.

In the last few months, MPs of the Republican Party (they form a ruling coalition with the Armenian Revolutionary Federation) amended the constitution to give the future PM control over the police and other security services. They even ruled to turn the current presidential palace on Marshal Baghramyan Avenue into the PM’s office, so that Sargsyan won’t even need to clean out his desk. As for Karapetyan, he is expected to be a pick for a first deputy premier in the new government, where he will be focusing on economic development.

Armenia’s political opposition is unlikely to seriously challenge Sargsyan’s path to this new role. Yelk, a bloc which holds nine seats in the National Assembly, appears to be divided in the face of this much-expected development. One of its leaders, Nikol Pashinyan, called for street protests but failed to unite the faction and bloc behind the effort. Nevertheless, with a handful of supporters, he started a 14-day protest walk from Gyumri to Yerevan. It is expected to end with a demonstration in the capital.

In a recent interview, Pashinyan promised to organize “the biggest and most decisive rally in Armenia’s history.” But a decade into Sargsyan’s rule, Armenian society seems to be running out of protest potential. Starting in 2013, Yerevan witnessed four straight summers of mass protests – but since 2016, there has yet to be a demonstration of much size. Police violence, punitive use of pre-trial detention, emigration and economic decline have effectively neutralized the opposition.

Sargsyan is an authoritarian leader without populist appeal, and appears to harbor no illusions about his lack of popularity: ahead of last year's parliamentary elections, it was Karapetyan’s face on all the ruling party's ads. A mere 10 percent of Armenian citizens believe the country has fair elections, according to the annual Caucasus Barometer survey.

The same study indicates that 6 percent of the respondents fully trust the president. But after the transition to the parliamentary system, ratings won’t matter much. A new nation’s leader will be elected by the National Assembly, controlled by Sargsyan’s party until at least 2022.

Tom de Waal, a Carnegie Europe senior fellow and prominent chronicler of the Karabakh conflict, wrote that “the new configuration and its division of powers could work better for Armenia than the old one.”

But Armenia-based experts rarely share his optimism. “The problem is that it’s all happening in a situation of legitimacy deficit – both the constitutional referendum and parliamentary elections were held at a time when most of the citizens are alienated from power,” said Mikael Zolyan, an expert with the Regional Studies Center in a recent interview with RFE/RL.

Zolyan went as far as predicting an oligarchic rule. “It is likely to be an oligarchy. […] Power of the few groups that effectively will control the parliament and all the political system through mechanisms offered by the new constitution – because the whole system of checks and balances is being eliminated.”