As Azerbaijani blockade drags on, Azerbaijan denies that it's a blockade

Azerbaijanis promise that Armenians can pass along the road. But for Armenians, the conditions are politically unacceptable. 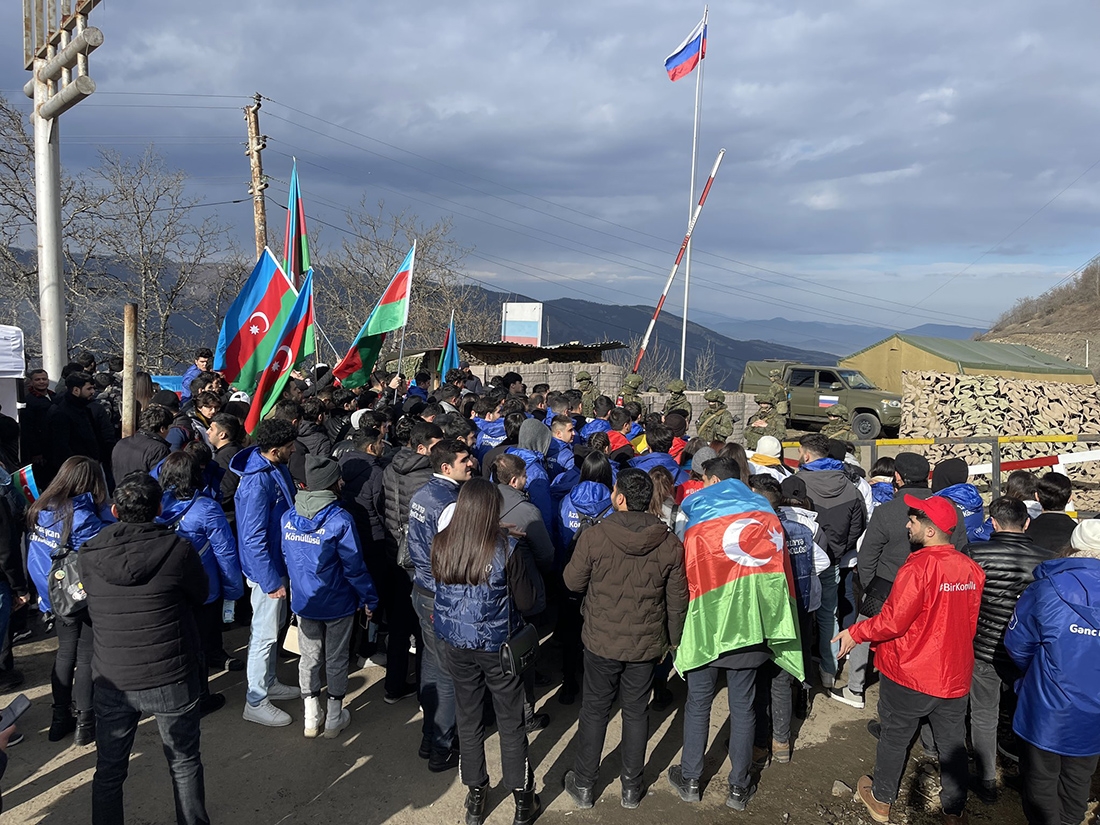 As Azerbaijan’s blockade of Nagorno-Karabakh marks its tenth day, and gathers more and more international condemnation, it is becoming increasingly clear that it is not a blockade as that word is typically imagined.

Azerbaijanis promise that they will allow Armenians to pass along the road, and in at least one case that has happened: an ambulance that passed on December 19 with an escort from the International Committee of the Red Cross. Occasional convoys of Russian military vehicles also have been shown passing.

The catch, though, is that it has to happen on Azerbaijan’s terms.

The Azerbaijani government-sponsored protesters who have imposed the blockade insist that they will let through civilian Armenians and their supplies of food and medicine – if they call one of the protesters and make arrangements in advance, and submit to inspections checking for weapons or illegal goods. They say that it is the Armenians themselves who are refusing to take them up on the offer.

That argument has been backed up by the Azerbaijani government, which officially rejects the notion that it is blockading the Armenians.

“The regime for the movement of citizens, goods and vehicles along the road remains unchanged. […] Video footage shared on social media shows unimpeded passage of the various types of vehicles, including ambulances and humanitarian convoys,” Azerbaijan’s Foreign Ministry said in a December 20 statement as the United Nations Security Council took up the issue. “The Government of Azerbaijan has repeatedly expressed its readiness to address all humanitarian needs that might be faced by Armenian residents in an expeditious manner.”

For Armenians, submitting to Azerbaijani government control over the traffic is an unacceptable condition.

“Various reports claim that the road is open, but it's not accurate,” said Ruben Vardanyan, Nagorno-Karabakh’s de facto state minister (a position akin to prime minister), in a December 20 video address. “Azerbaijanis remain on the road, and they can stop or let the cars through whenever they want. “We consider it unacceptable, they should leave and not disrupt the traffic.”

He argued that submitting to the informal inspections is tantamount to a de facto customs regime, something that Baku has long been insisting on. “If we allow them to stop our cars or check them, it will give them an opportunity to technically set up checkpoints,” he said.

Traffic on the road known as the Lachin Corridor, the only road in and out of Nagorno-Karabakh, has been halted since December 12. On that day a group of Azerbaijani government-backed protesters began a demonstration demanding that the Russian peacekeepers, which provide security on the road, allow Azerbaijani environmental inspectors access to mines in the Russian-controlled part of Karabakh to investigate claims that Armenians are stealing minerals from Azerbaijani land.

The peacekeepers have refused and the ensuing standoff has halted traffic on the road, leaving the tens of thousands of ethnic Armenian residents of Karabakh effectively marooned. As the crisis has dragged on, shortages of food and fuel have begun to be reported. The local authorities have instituted rationing regimes on essential items, and some grocery stores and vegetable markets have closed due to a lack of goods to sell. Problems with health care have arisen, too, as patients are unable to be transferred to Armenia where there are better treatment options.

One of the protesters, Dilara Efendiyeva, set up a hotline for Armenians of Karabakh to appeal for assistance in crossing the protest site. But while she said they have gotten “a lot” of calls, “most of them are threats and pressure,” she told Eurasianet on December 21. “We have information that there is a ban on contacting us.”

The Armenian residents of Karabakh don’t trust the Azerbaijani promises that they can pass safely, Artak Beglaryan, a former state minister of Karabakh, told Eurasianet. “We have no guarantees that Azerbaijanis will not try to provoke or harm ordinary people driving through,” he said at an interview in Yerevan, where he has been forced to stay since the surprise imposition of the blockade caught him on the Armenian side of the border. “If the road is under their [Azerbaijani] control, they can check the cars, turn them back, not allow them through, or even humiliate the citizens.”

As for the Azerbaijani hotline, “it’s a fake propagandist step,” he said. “I also can leave a hotline number and say that if any political prisoners in Baku have complaints, they can contact me. They are not intending to help.”

“Our demand is straightforward: we should return to the December 11 regime of using the road, when Azerbaijanis had no control over the road,” he said.

The protesters and their backers in the Azerbaijani government argue that their demands are directed not at the Armenians of Karabakh but at the Russia peacekeepers. It is the Russians, they argue, that have set up the checkpoints that Armenians can not cross.

Armenian claims are “nothing but hypocrisy,” Azerbaijan’s Foreign Ministry said in a statement on the second day of the blockade.

“It should be noted that the Lachin road was closed not by Azerbaijani protesters, but by the peacekeeping contingent of the Russian Federation. […] Azerbaijan is ready to facilitate humanitarian needs of all Armenian residents living on its territories, and the claims of the Armenian side are baseless,” the statement read.

But even as officials claim that they are not intentionally closing the road, many of their statements suggest that asserting Azerbaijani control over the road is at least part of the motivation for the action.

A December 18 report on the situation from Azerbaijani public television argued that “experts believe that in order to put an end to this and other illegalities [referring to claims of illegal mining in Karabakh], it is necessary to establish an Azerbaijani checkpoint on the road to Lachin.”

One senior Azerbaijani government official was asked why the protesters were not conducting their demonstration in a way that didn't effectively result in a blockade of Karabakh.

"We've been protesting in other ways for 30 years," the official told Eurasianet, speaking on condition of anonymity. "Backing separatists is not the solution to the problem. We want Armenians to stop stealing what belongs to us."

Azerbaijan is sending the message to Karabakh Armenians that they are “not fully protected” by the peacekeepers,” he continued. “The policy of discrediting the peacekeepers has brought some results since the public perception in Armenia and Karabakh has changed mainly in a negative direction,” he said. “The message is therefore that ‘we [Azerbaijan] will not allow the humanitarian catastrophe to happen, but this will be done by demonstrating the weakness of peacekeepers and separatist authorities.’"