A tainted election was swiftly followed by a violent night and confusion about who rules Kyrgyzstan. 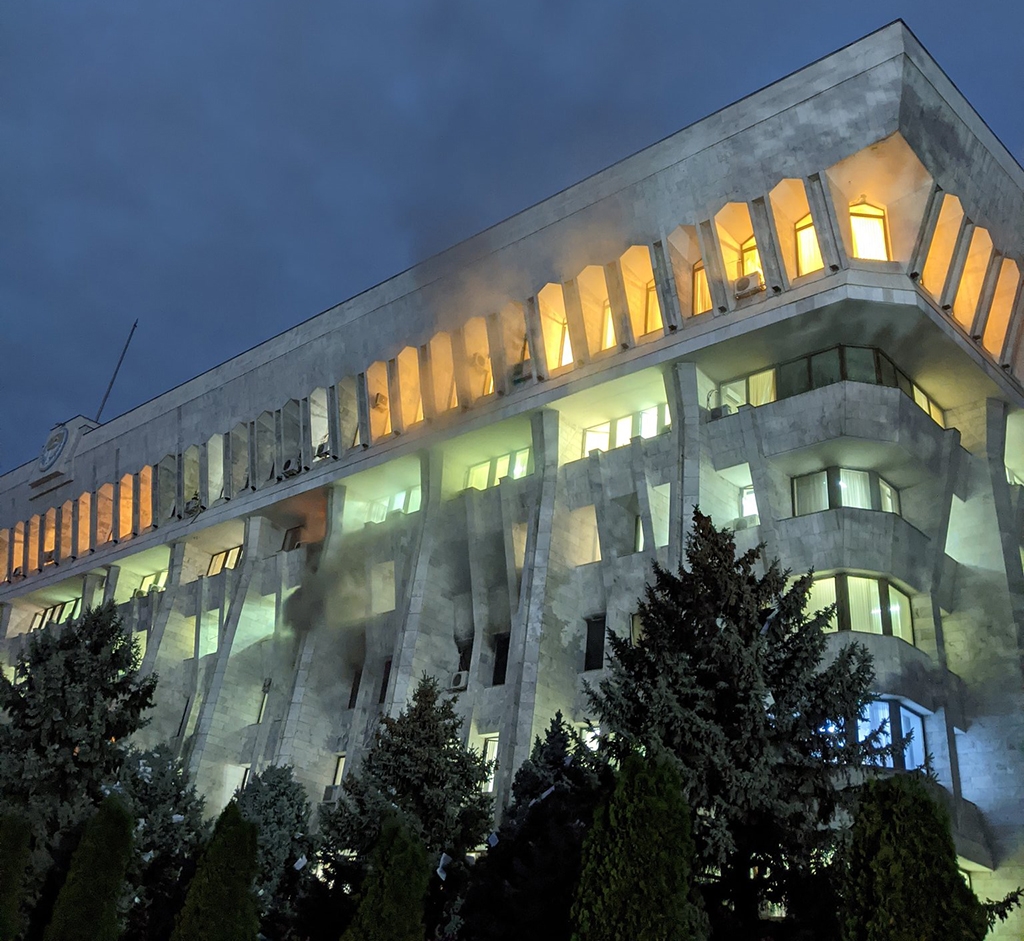 Only hours after clashes broke out in Kyrgyzstan’s capital between demonstrators and riot police, the headquarters of government and the security services were seized by protesters, prominent imprisoned politicians had been released, and the president had gone to ground.

By daybreak on October 6, the central Bishkek square where hours of peaceful, if fiery, rallies sparked by anger over election-rigging had degenerated into a scene of bitter fighting the night before, large crowds of men milled around in uncertain anticipation.

The upper floors of the White House, the objective of much of the night’s fighting, were ablaze.

The sheer speed of events was dizzying.

The various political parties opposing the government and the October 4 parliamentary election had appeared in disarray less than 24 hours earlier. Early unwillingness to set aside differences led to contemporaneous protest rallies being held in different locations.

The dynamic had changed soon after lunchtime, when all the demonstrators converged on Ala-Too square, already the site of major uprisings in 2005 and 2010. What followed were hours of speeches from politicians demanding a redo of the election, which had appeared to seal the power of parties supporting the status quo.

Between the two of them, Birimdik, which is closely linked to President Sooronbai Jeenbekov, and Mekenim Kyrgyzstan, a party bankrolled by a notorious former customs chief suspected of overseeing a vast smuggling operation, had collectively grabbed a dominant bloc in parliament. But independent observers argued, with evidence, that this had only been achieved through vote-buying and intimidation.

Although the specifics of the vote-rigging need more investigation, what is certain is that the election saw about one-third of ballots go to parties that were shut out of parliament. This accounts for the sheer width of the street-bound, anti-government coalition that formed within hours.

Busloads of riot police were drafted in to monitor the Ala-Too rally from the distance of a couple of blocks, but maintained their distance, even as the size of the crowd swelled. One speaker after another took the tribune overlooking the square to deliver speeches attacking not just the election, but Jeenbekov too.

As darkness fell, the uncertainty and tension deepened. Around 8:30 p.m. a group of men tried to force open the gates of the White House, just a few hundred yards away from where the rally had unfolded. It was unclear whether the mob had peeled off from the main crowd or had arrived from another location. Speculation circulated that this might have been an act of provocation to justify a crackdown from the waiting police.

The reaction was swift. Riot police duly arrived at the scene, guns blazing. The wounds later displayed by the injured appeared to indicate that the police were firing metallic ball projectiles – more damaging than rubber bullets, but short of live rounds.

Police seized the opportunity to clear the square itself too. Multiple opposition politicians were caught up in the melee. Ata Meken party politicians Janar Akayev, Tilek Toktogaziyev and Eldar Abakirov were among the wounded.

It was at this time that several blocks of central Bishkek descended into bedlam. Police chased protesters in all directions, but they were then repelled with violent resistance. Crowds occupied crossroads only two blocks from the White House. Some stood their ground, others were more interested in waging battle, setting dumpsters alight and pelting police with projectiles.

The battles continued for hours until a breakthrough in the heart of the night, when crowds managed to force their way into the White House and, no less crucially, the headquarters of the State Committee for National Security, or GKNB.

Attention then turned to liberating prisoners held in the GKNB building. One included the former President Almazbek Atambayev, who was serving an 11-year sentence for complicity in abetting the unlawful release of a convicted mobster and still faces criminal trials on multiple charges, including some related to his bloody armed standoff against government troops at his country home in August 2019. Another was former member of parliament, Sadyr Japarov. A court in Bishkek in 2017 sentenced him to 11-and-a-half years in relation to the kidnapping of a regional governor in 2013.

As the sun was rising, a pale Japarov was led by his jubilant liberators to Ala-Too square, where some broke into isolated chants of “Sapar president! Sapar president!”

Despite the nights of chaos, some semblance of calm was returning to Bishkek even as these scenes played out, despite police disappearing from the streets. A former deputy Interior Minister, Kursan Asanaov, has assumed the position of komendant of Bishkek, essentially taking charge of restoring security to the city. Volunteer brigades have been formed to insure against an outbreak of looting, as happened after the government was toppled in March 2005 and again in April 2010.

Jeenbekov’s whereabouts in the morning, meanwhile, were still something of a mystery. Some unconfirmed reports had him fleeing back to his native south.

Attention will now, in any event, be turning to the south, which voted in numbers for the victorious parties in the parliamentary election. Police in the city of Osh emerged in numbers onto the square opposite the governor’s office at dawn. They were accompanied by groups of burly men in plainclothes. It is far from clear what they are expecting.

No less certain is who precisely is now running the country. At least one major change of personnel has been effected. Kaktus news website reported that Omurbek Suvanaliyev had been appointed the interim head of the GKNB. The whereabouts of the now-deposed security service chief, Orozbek Opumbayev, was unknown as of the early hours of October 6.