As ever, Tajikistan responds to bloodshed with obfuscation

The government says the Islamic State attacked a remote border outpost this week, but was successfully repelled. Its story is already crumbling. 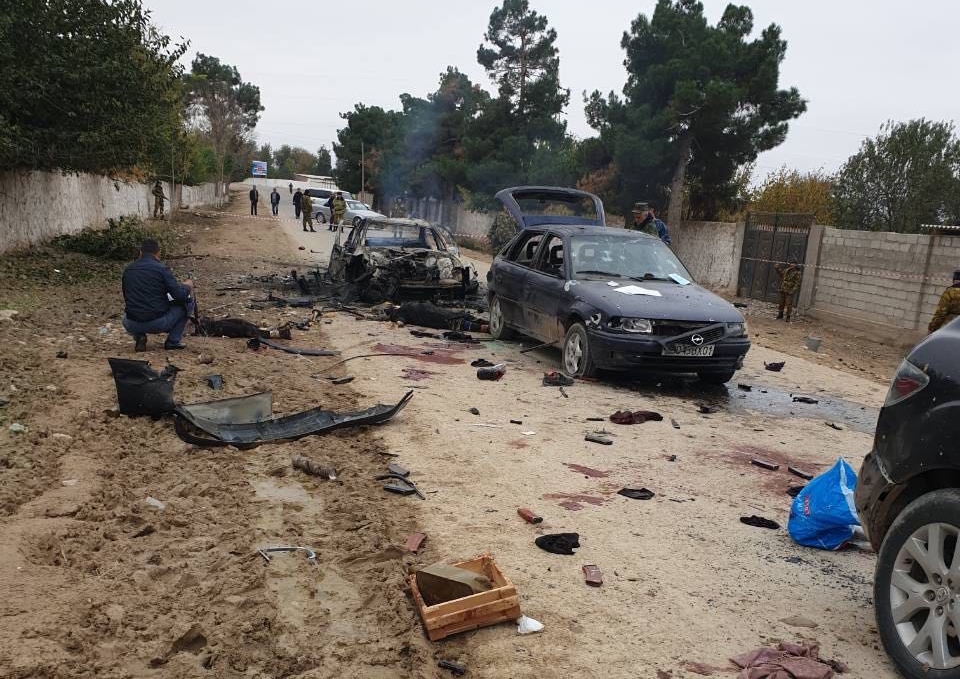 Scene of the violent confrontation. All images released by Tajikistan’s Interior Ministry.

Yet again, blood has been shed in Tajikistan.

As on other occasions, the government is not being forthcoming about what occurred, limiting itself to pinning the blame on radical Islamic militants. And some of the details that the authorities have offered appear to be outright false.

According to the official account, the trouble began after 3 a.m. on November 6.

What the State Committee for National Security, or GKNB, and the Interior Ministry have said in statements is that a group composed of 20 masked individuals mounted an assault on the Ishqobod border outpost. That spot is in the rural municipality of Esanboy, which lies on the banks of the Kofarnihon River that marks the border with Uzbekistan. 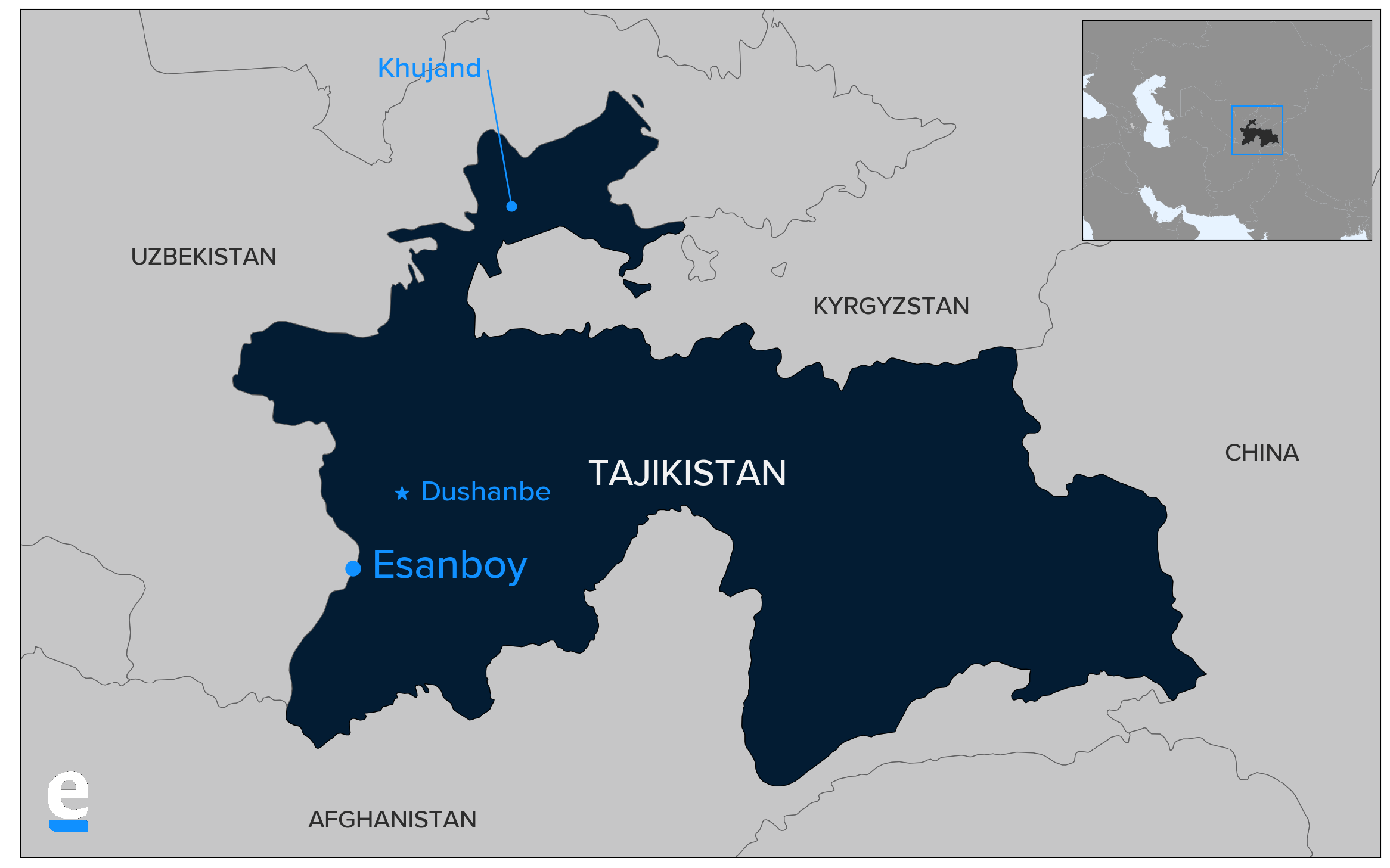 The group, which the government labeled as a cell of the Islamic State group only hours after incident occurred, is said to have seized five Kalashnikov automatic rifles during their operation.

As of November 8, the official death toll was still 17. Giving an account with such an imbalance of fatalities – 15 assailants, one police officer and one border guard soldier – is apparently intended to convey the impression of a one-sided battle waged by efficient government troops unfazed by a surprise raid.

But this story is already crumbling.

RFE/RL’s Tajik service, Radio Ozodi, on October 8 cited an array of sources, from relatives to local government officials, to report that six government personnel had died: five border guards and one police officer.

In something of a break from custom, the Interior Ministry was swift in publishing images of the aftermath of the violence.

The four pictures show a grisly scene of carnage.

The charred and bloodied bodies of four men lie behind the burned-out remains of the first in a line of four vehicles. It looks at first glance as though automatic rifles have spilled from the rear of that leading car, but it is unclear if the weapons simply fell out or whether they were being carried by the alleged militants.

Officials say the attackers were travelling in a convoy of four cars, which appear to be same seen in these photos.

Other bodies – at least one is of a woman – are strewn about the two following cars, which have been shot up but are still relatively intact. The final car is, like the first, totally incinerated.

This layout lends weight to an alternative scenario described by a well-placed law enforcement official who spoke to Eurasianet on condition of anonymity. What the official said was that the assailants had in fact already successfully raided the Ishqobod border guard post and seized the weapons. If what that official told Eurasianet is correct, what the pictures show is not the aftermath of a pitched battle, but the result of an ambush in which grenade launchers and other heavy equipment were deployed against a fleeing convoy.

The pictures have since without explanation been pulled from the Interior Ministry website. Officials have declined to provide any explanations for a series of odd details visible in those images, such as the fact one of the apparent fatalities seen in a photo appears to have had his hands bound behind his back with a cable tie. 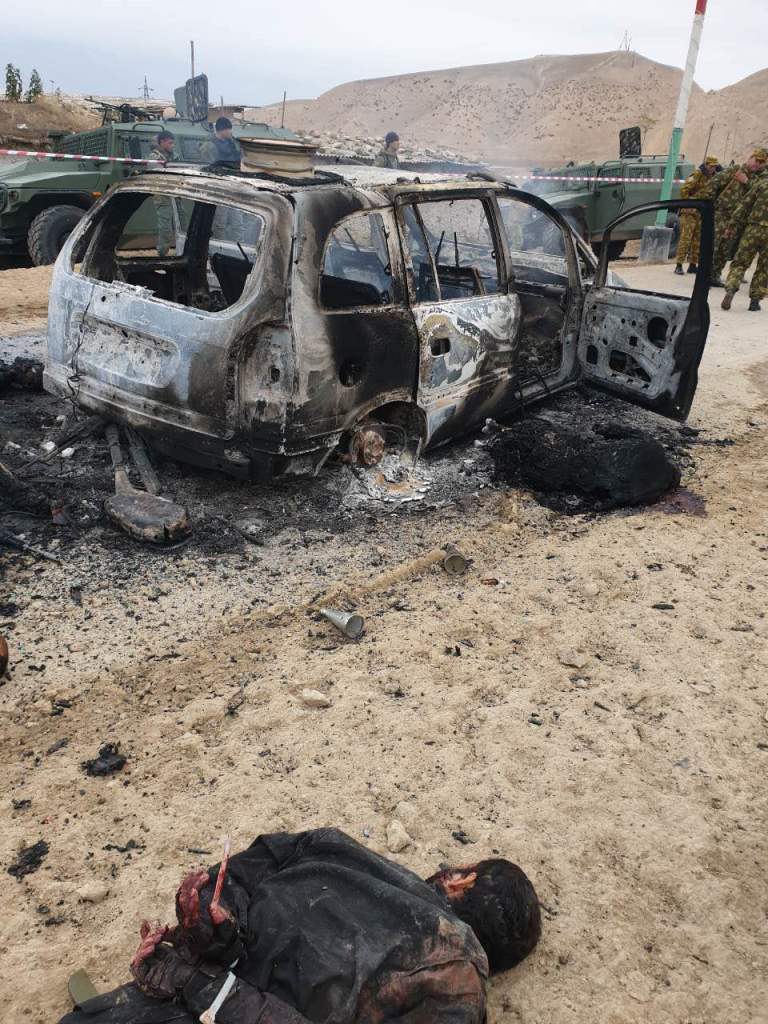 The question of who was behind this incident is just as vexing.

The authorities claim they managed to get the full story out of the attackers that they captured following questioning. The Interior Ministry says four people were detained; the GKNB talks about five detainees.

The border guard service maintains that the group crossed illegally into Tajikistan from Afghanistan’s Qala-i-Zal district of the Kunduz province under cover of darkness on November 3.

The New York Times cited Mohammad Nabi Gochli, a police commander in Qala-i-Zal, as saying that he believed the militants had indeed crossed from Afghanistan and that the border is especially porous in that location because it is under Taliban control.

Afghan military officials in Kabul, meanwhile, took a different line, insisting that Tajikistan had no evidence for its claim.

The suggestion, made by Tajik authorities themselves, that the assailants were compelled to raid a border outpost for weaponry appears to undermine the Afghan link, however. Militants crossing without authorization from Afghanistan would surely have been better off sourcing light weapons there instead of having to steal them using force in Tajikistan.

The Afghan scenario also raises questions about the planning that would have gone into this act. Traveling from southern Tajikistan to the Ishqobod border outpost would have entailed more than 200 kilometres of driving and at constant risk of being stopped by inquisitive law enforcement officers. The presence of outsiders in any rural location in Tajikistan invariably attracts attention and with that the scrutiny of a vast network of security service informants.

Late on November 8, the SITE Intel Group reported that the Islamic State, through its "Amaq News Agency," had claimed responsibility for the attack. According to the IS statement, its "attackers continued to clash with the Tajik security forces until all its participants were killed, and that came after killing at least 10 Tajik soldiers, and wounding others, and destroying several vehicles, as well as causing significant material damage to the border post."

The question of provenance may evolve yet.

Umarjon Emomali, a spokesman for the Interior Ministry, on November 8 told local media that the bulk of the alleged attackers were nationals of Tajikistan from the north of the country.

Plates seen on two of the cars in the Interior Ministry handout photos show them to be registered in Dushanbe, a fact that casts more doubt on the Afghanistan angle.

Senior officials in Tajikistan have spoken frequently of the dangers presumed to be lurking beyond the 1,357 kilometers of border that the country shares with Afghanistan.

At times, they have warned of imminent danger, such as when the head of the border service, General-Lieutenant Radjabali Rahmonali, declared in February that almost 17,000 militants, including 6,300 foreign mercenaries, had mustered at the frontier. Russian colleagues have tended to egg on such alarmism.

President Emomali Rahmon, meanwhile, makes the preservation of stability in the face of such menace the cornerstone of his legitimacy. His government has exploited the specter of terrorism to the fullest by tarring opposition parties with the label of extremism and pursuing their arrest.

Political analyst Parviz Mullojanov said that on the one hand, the bloodshed that unfolded in western Tajikistan this week was redolent of the “senselessness and cruelty" of the Islamic State’s actions.

“But the official account has so many contradictions, and it is so poorly articulated that there are a lot of ambiguities,” Mullojanov said.

And yet, there is a precedent for the Islamic State claiming acts in Tajikistan whose logistics may not necessarily have been organized by the group, but which were nonetheless perpetrated by self-declared loyalists.

When four foreign cyclists were murdered in a car-ramming in southern Tajikistan in July 2018, the Islamic State took responsibility. Video footage surfaced at the same time showing the young Tajik perpetrators vowing a pledge of allegiance in front of the militant group’s black standard.

“This is all very hard to monitor,” Mullojanov said. “Islamic State are able to claim acts which were committed by people that had no detailed instructions, but that were just given general orders.”

UPDATE: This story has been updated to include the Islamic State's claim of responsibility.